KameSame’s server costs are about $80 per month, help cover them at our Patreon page

Hello, Internet! KameSame is a free Japanese learning tool that is designed to offer a fast, streamlined user interface and a robust feature set that provide users with a variety of ways to learn Japanese. Because it features a complete dictionary, it can be your primary Japanese learning tool for years to come.

Here is a 45 minute walk through of basically everything you could ever need to know about the app:

How do I type Japanese?

KameSame requires you to use a real Japanese software or hardware keyboard for production cards. The goal of the system is to teach you how to actually type words, kanji-and-all, exactly as you would in every day life. If you need help setting this up, Tofugu has a good tutorial on it.

No, it isn’t cheating. If you want to produce the kanji 委 and you choose to type 委託 and then hit backspace to delete 託, that is not cheating yourself. You just learned how to produce a single kanji in an efficient way. This is something that Japanese people have to do all the time, too! Particularly because it’s a little unusual to be typing a standalone kanji, since that’s not how they’re actually used in language. That said, if you want to challenge yourself to practice kanji cards with a handwriting recognition keyboard, or by using your IME to look them up by radical or stroke order, feel free to do so. It’s up to you!

KameSame’s been in development for a little over two years now, so there have been a lot of updates over time:

Every time I type a character in any field of the sign up page, it gives me a script error.

Interestingly, it does not happen on Chrome or Firefox. 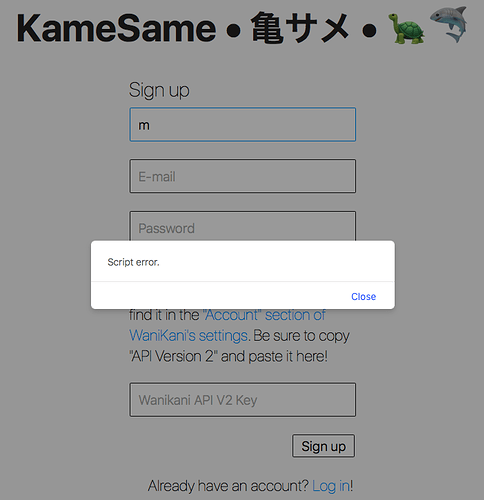 Thanks! If you could try again I just wired up some error reporting. Thanks!

Great app, I’m having lots of fun with it! Shocking the number of things I thought I knew but really don’t. As a suggestion, would it be possible for it to ask only for items that are Guru’d and above? I think it’s fair to not be expected to think of a word I only just unlocked this morning. Besides which WK sometimes has this hiccup where a vocab is noted as unlocked even though you haven’t come across it in lessons yet, and I’ve had one such item pop up so far.

So far I’m loving it. I always had a hard time with KaniWani because the way it deals with kanji with similar meanings, and this nails it for me. I just found something during lessons: when you get wrong a vocab (could be kanji and radicals too, haven’t tested it yet), it shows “see 「undefined」” instead of “see 「」”, same with “Look up 「」”, but creates the link correctly (WaniKani / Vocabulary / 最近, bottom left), so it could be a typo in the code. 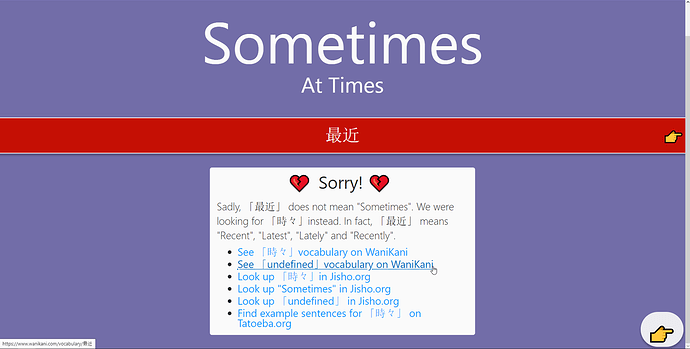 I also really love the app but also agree that starting with guru ‘d items would be better, I take a while to go through my lessons and everything in the queue is showing up in KameSame before I’ve studied it here.

Otherwise everything works well and i feel this will help with my reading speed when encountering stuff in the wild.

Thanks for the feedback!

Right now the information I pull from your WK account is very very minimal, just your level, really, which is why you’ll get items in KameSame that you haven’t unlocked in WK yet. I was trying to really nail the mobile UI first and then tighten the integration.

But I’m also having a hard time with similar items in KaniWani so this looks very promising.

Are you planning to include more specific controls about what will show up as lessons? Such as reviewing only items above a certain state (e.g. only burnt items) or enabling only one level at a time? Otherwise it might be a bit frustrating to start using it when you are not in one of the lower levels anymore. This is one of KaniWani’s most important features for me.

Good point. I think making this configurable is probably the right choice, and I think the right place to do it is the /lessons page, instead of account-wide. So instead of just choosing a number of totally random lessons, you could choose number plus some criteria (like: ‘at level’, ‘unlocked’, ‘guru’, … ‘burned’; with the likely default being ‘unlocked’ or ‘guru’) and that way only pull into review what you want.

Hello! I tried it out, it’s a great program, thank you for your hard work! I will definitely use that alongside my Wanikani studies from now on ^-^

Just a question: The card for Yen exists twice: once it wants you to put in ~en and once just the kanji en. I was wondering if that had a specific reason? It is kind of confusing ><

Really looking forward to how this site develops! Thank you ~ 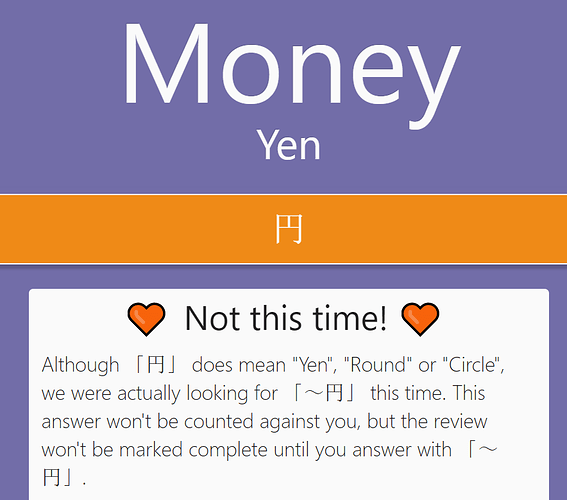 I have only played around with it for a very short while, but I like it so far. I do also agree with all the feedback given so far - those features would be really great!

One other thing I noticed: I clicked the link for a WaniKani vocab page expecting it to open in a new tab. It opened in my current tab instead, overwriting the lesson. I could back up into the lesson with no problem, leaving me where I left off, but if I go down a rabbit hole of doing research on the side, my lesson would likely be lost in the shuffle. So perhaps an idea to open the links in different tabs?

Thank you very much for sharing your hard work!

Hey Omun, in general I default to leaving links target the tab/window the user’s on (since every browser has a way to manually open things in a new tab). However, in an “app-ey” display this can be jarring, so it might be better to have most external links open in a new tab (even though I’m proud of how well KameSame deals with history and session persistence so far!). I’ll think about this.

Thanks for asking! KameSame doesn’t build its own curriculum, rather every item it tests you on comes straight out of WaniKani, which has items for both 円 and 〜円.

There are a handful of lessons (like this one) that don’t make a ton of sense, so I think a reasonable feature for KameSame would be to block certain items from showing up in lessons (and any of the 〜… items might be a good start)

Well, thanks a lot to everyone in this thread for feedback. Between error reports and feature requests, we now have a pretty long backlog to prioritize! 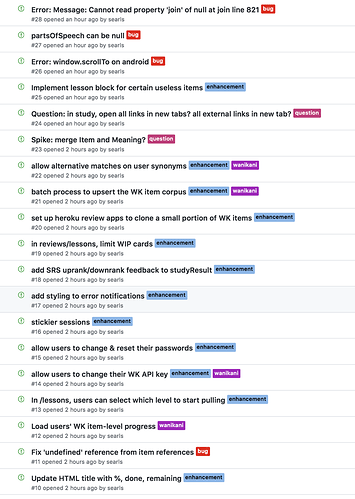 Thanks! If you could try again I just wired up some error reporting. Thanks!

No errors this time. Form now works on Safari. Thanks!

Great first day of activity in the app so far. I’ve got a long feature list to work on, and in the meantime I’ve fixed the first half dozen or so bugs reported here and caught by our bug tracker. I hope folks keep finding and enjoying KameSame while I iterate on it

@searls Could you add the reading to the result page. Especially on mobile, where kanji generation and autocorrect are mixed it is easy to type the wrong reading and still get the right result (and sometimes the other way around).

Given the webapp nature the only way to refresh the count in the top bar seems to be reloading the entire page. Not a drama but surprising as switching to different menu items (e.g. home) did not.

Another idea would be to quiz for readings explicitly. Quizing for them separately would help ensuring that you really know both by heart. Given the rather limited value add, I understand if that is not interesting though.

I was getting kinda annoyed when kaniwani said I was wrong even though asking for the word mother/farther for example can have two different answers as taught by wanikani.
Im going to try this out then.
Thanks for sharing it with us!

Edit:
Something I noticed is when I get a answer wrong it only gives me the kanji for the right answer. Would it be possible to show the furigana if answered wrongly? That would be really helpful. Is nice that it links to jisho though.

I think this is a good idea, since producing the word might not be made much easier if you have zero idea on how to pronounce it (though clicking through to another resource in that case might be better). I’ve added this to the backlog.

Iiiinteresting. Will have to give it a try.

Question: My WK subscription is up in a few days. Kaniwani has a feature where you can pause automatic syncing with WK before your subscription is up, so you don’t lose access to vocab in Kaniwani. Do you have/are you planning to include this option?