This script adds buttons that reorder remaining reviews by their SRS level in either ascending or descending order.

This is a fork (l33t for altered ripoff

) of @Towe’s awesome SRS Reorder Script (their post can be found here).

Particular to this fork:

Please reference the project homepage here on GitHub. It has way more detail and information about the userscript and its features!

Note: ensure that the WaniKani OpenFramework userscript is set to load before this reorder script

Please reference my userscript bug reporting guide for info on how to best report issues and bugs. It’s seriously helpful for myself in particular when trying to help resolve issues 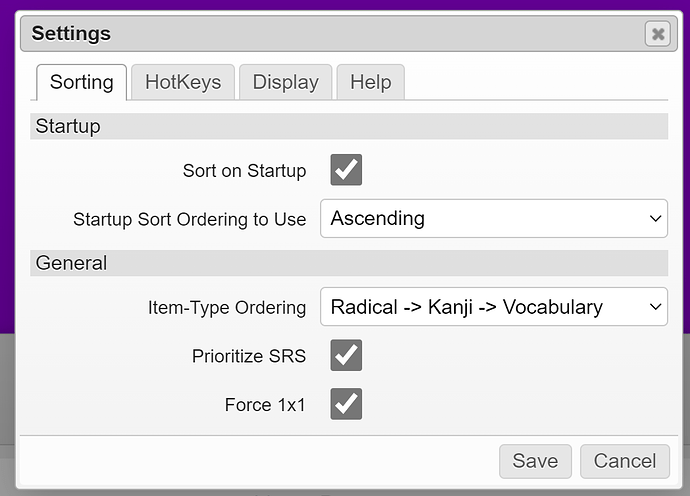 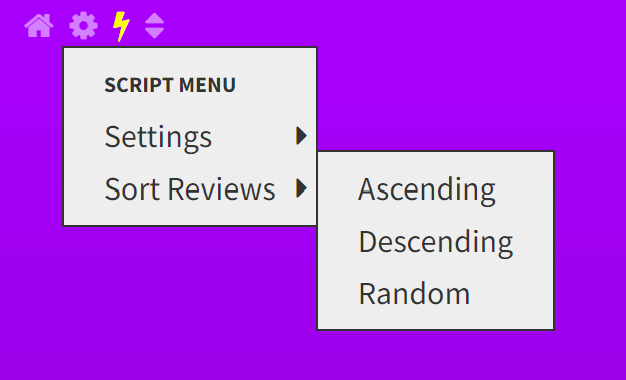 19 Likes
How am I to catch up? What am I doing wrong?
Overwhelmed.. I stopped for a week or two and don't know how to catch up
WaniKani SRS Reorder Button
[Userscript] SRS Counters
Order Reviews by SRS Stage?
Got behind, advice on catching up?
Returning after a long break
Been away for a year, trying to get back in
How to see Apprentice List?
After a long break
What to do when you've fallen behind?
WaniKani SRS Reorder Button
Beating 1500 reviews! a journey
WaniKani SRS Reorder Button
What do you want now? (Request extensions here)
The New And Improved List Of API and Third Party Apps
Let's climb Tokyo Skytree - level 60 in spring 2022
ロウェナの学習ログ・（Rowena's Study Log）
[Userscript]: Reorder Ultimate 2 [newest]
The New And Improved List Of API and Third Party Apps
NEED HELP! 1 month break turned into a year cannot recover
Beghaus January 15, 2020, 1:14am #2

Exactly what I wanted. Thanks, boss!

Glad to hear. Chief! Let me know if anything about it feels like it could be improved!

Thanks for this script!

I was desperate for something like this to help me gently climb out of 1000+ review pile.
Focusing on Apprentice/Guru from time to time will make it a bit easier.

I’m really interested in trying out this script to target my burnable items, but I can’t get it to work in Firefox. I’m able to run other WaniKani scripts, just not this one. I’ve edited the script a bit to try and do some print-line debugging, but I don’t even hit those. It seems like the script is not being run at all, despite no error/log information in the console indicating a failure.

Do you know of any common failure points I could try addressing? I’m using Firefox with ViolenceMonkey at the moment (though I also have TamperMonkey and have verified the same behavior in that environment as well).

Update: I downloaded a chromium-based browser and verified that it works. It would be nice if this ran on Firefox, but it isn’t the end of the world. Thanks for the script!

Heya! I’m super grateful you put in so much time looking into that! I’m not currently running FireFox on my machine, but I’ll set myself a reminder to try a fresh FireFox+Tampermonkey setup tonight and debug if needed.

Ideally, this would work across any user script engine/browser combo given there’s really nothing super specific going on with the script. It really helps knowing it at least still works on Chromium browsers – I personally use it daily on Safari+Tampermonkey and have had it work on FireFox+Tampermonkey before.

I’ll get back to this later today with an update.

I’ll get back to this later today with an update.

I went to WaniKani — Log in and the script activated just fine. Both ascending and descending order buttons worked, and counters remained updated as I cleared reviews.

@ihfdayton, I’m totally down to help you debug this so that it works with your intended setup. I wish I knew enough to add debug logging or utility to the script, but that’s honestly way out of my skill set for user scripts, so I’d definitely need your help in recreating your setup locally to iterate on things. If you want to go through with that, please open up a ticket on the project issue tracker and we can go back and forth there

Thanks for being so willing to help! I’ll do some detailed reporting as soon as I can and open up an issue on github.

Interestingly, the script is now failing to run in my Chromium environment as well.

EDIT: Turns out I’m bad at JavaScript. I did a bit of debugging and tinkering with the code and I believe the problem I was seeing was a timing issue. It seems like sometimes the reviews kick up faster than the script can populate from the WK API. By adding a breakpoint in the script initialization and then continuing after a couple seconds, I can reliably run the script in both Chromium and Firefox.

Oh! That’s super useful info!
So to be sure I understand, the issue is resolved by literally pausing the script’s initialization while reviews load? If so, I think I know some quick changes I can make to prevent sorting until reviews are loaded.
Thanks a bunch for the investigation!

Yep, spot on. Sorry for any confusion, I had WK vs. script backwards in my previous post. Let me know if you need anything else!

so I tried recreating things so I could be sure the issue would be fixed when I make edits to the script, but I really couldn’t get it worked out.

I’ve created this issue to track updates or maybe other reports of the same bug. If you could add any edits you made that helped out, it’d be really helpful for both myself and other potential users running into the same issue in the future.

I’ve noticed the recent change around how reviews are pulled locally affects the script as it’s currently implemented.
I’m working on a fix now, as well as a general set of improvements leveraging the new dependency I’ll be using to best address the problem: leveraging the WaniKani Open Framework plugin.
I’ll make another post when the new release is out!

Thanks very much - I put WK on VM a couple of days after it broke ‘cause I didn’t want to have to do ALL pending reviews just to progress each day’s new lessons. Much appreciated

New version of this user script is live! I’ve updated both the OP and the GitHub page with details on the new changes, features, and installation requirements.

The REALLY big deal right now is that this update fixes the script to work as it used to before the recent compatibility mode changes that were released – version 1.0.0 of this script will literally just not work at all going forward. Install the latest version to get back to your usual routine!

2 other major things to note right now about this release:

Again, sorry for the delay in releasing this fix, I’ll be better about keeping up with WK developer announcements going forward!

I totally forgot to mention this, but I’ve updated the install instructions in the OP. To update, just reinstall if your userscript engine doesn’t update the script version for you

ent compatibility mode changes that were released – version 1.0.0 of this script will literally just not work at all going forward. Install the latest version to get back to your usual routine!

Thanks for the update as this script makes Wanikani usable for me, but it is behaving a little strangely on my end. Hard to explain, but for example when when I complete a review for a Level 1 SRS item, the number in the top right corner decreases for both Level 1 and Level 2. If I refresh the page then Level 2 goes back to the number that it should be. Hope that makes sense!

Also the buttons no longer appear for me in the bottom right corner. I guess that is on purpose as we have the menu option now?

With all other scripts disabled except the SRS reorder button and this one I am getting other weird results like this.

I’m happy to hear this script helps so much

when when I complete a review for a Level 1 SRS item, the number in the top right corner decreases for both Level 1 and Level 2. If I refresh the page then Level 2 goes back to the number that it should be.

I’ll try doing some manual testing to see if I can recreate that behavior. I could totally believe that the counter is somehow bugged.

Also the buttons no longer appear for me in the bottom right corner. I guess that is on purpose as we have the menu option now?

Yeap, I moved the buttons into the top-left menu. Weighing the benefits (one-click access to functions) against the costs (fragile, extra code to maintain, incompatibility with custom CSS scripts), I felt it was best to integrate it into the menu. I’m totally willing to fold on this though if popular opinion votes for getting those buttons back down there. If ease of access is an issue, I’d highly encourage using the keyboard shortcuts.

Oh no, that’s definitely not right. I’m even particularly curious as to why the counter is all over the place. The way this counter is added to the UI isn’t particularly amazing, so if there’s multiple scripts trying to add it, I could totally see this happening.

Could you send a quick screen cap showing what user scripts are active from the review page? (I’ll put an example of mine below) 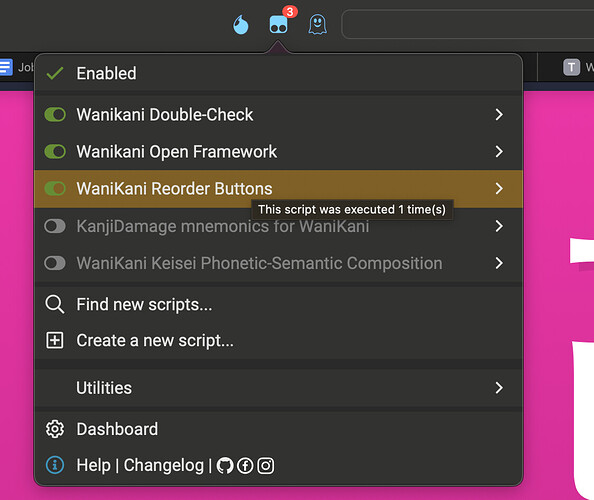 I’ll try doing some manual testing to see if I can recreate that behavior.

Could you send a quick screen cap showing what user scripts are active from the review page?

I’m just realizing now that these two behaviors may be related, actually. I tested things on my end with/without sorting on startup, and from different SRS levels. I can’t seem to recreate the issue as reported.