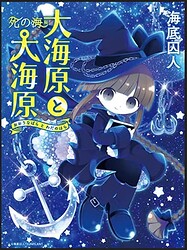 Long-awaited by fans all over the world! The creator himself made a comic of the undersea pure love RPG !!

The Sea Empire, the birthplace of the sea witch “Wadanohara”, has been invaded by the Totsusa Empire. But when the Princess of the Sea Empire is attacked by the Princess of the Usagi Empire, she is forced to fight back - but after much thought, the two are reconciled.
Far away, Samekichi, a former familiar of Wadanohara, is thinking: “I’m sure I’ll be able to protect you.”
What is the true meaning of Samekichi’s thought?
Now, all the truth will be revealed.

There are two bonus pages at the end of each chapter, which I did not include in the page count.

Please note: There are no page numbers, so I simply assigned them starting from the first page.

Where to read the book

This volume is ONLY available online at pixiv.net. Here are the links to all chapters:

How is your reading going? 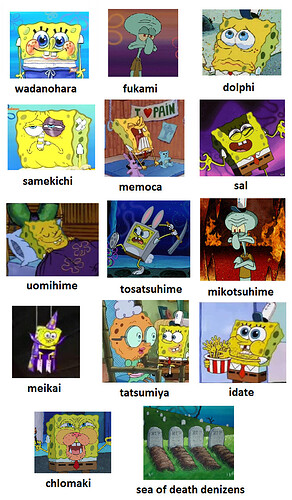 Finished the last chapter! It was long, but luckily not too hard to understand. My final questions:

Lastly, I want to thank all of you for sticking around till the end! Thanks for always filling the vocab sheet, it was a huge help and I couldn’t have read the third volume without it! Thanks to @Shunrin for the memes, they were all great!

Thanks to everyone for always answering my questions, especially @Shunrin and @2OC3aOdKgwSGlxfz! Your answers were super helpful and I learned a lot!

Hope to see you all in some other bookclubs or threads on Wanikani!

What happened to the other familiars? Are they dead? Or do we just not see them anymore?

Two of them are in the omake comics after the end of the chapter.

I wanted to confirm my understanding of 二つで一つ. I believe it means two in one or probably more fittingly here two sides of a coin.

That was my understanding as well.

I agree with your interpretation ように used this way is usually the equivalent of a sort of prayer where a person can express wishes that are difficult or out of their control to fulfill.

On a separate note, I also feel the story left quite a few things unanswered, and was overall more confusing than I expected. Despite this I enjoyed the whole fantasy-inside-the-ocean theme, and I felt it did a very good job of setting up a mysterious atmosphere during the first two volumes, though the lack of explanations at the end kind of counters that.

I’d like to give huge thanks to @Wizz for running the off-shoot club, and to @Shunrin for all the additional insight into the story and of course also for the memes

When I initially read the synopsis for this series I wasn’t very interested in it, but the gorgeous art in the sample pages instantly convinced me. Afterwards I even ran by pure coincidence into an interview with the person who translated the original Wadanohara game into English. I feel like I should give the game a try someday.

Hope to see you all in some other bookclubs!

You’re welcome for all the memes! (Seriously, you have no idea how long I was waiting to share some of those, but I couldn’t do it earlier because spoilers.)

Just finished! This was such a fun series! Thanks so much to everybody who followed along. I’d like to thank @Whizz for running this volume, and @bearytoast for running the original book club. It’s really nice to read with a group, however small, so anybody who participated at all has my thanks. But also, people like @Shunrin and @2OC3aOdKgwSGlxfz clearly know a bit more than I do, so extra thanks for sticking around for the rest of us.

l have more to say on books overall, but I’ll have to type it out later when I have time.

First of all I want to thank everyone, @Wizz for running the bookclub, @Shunrin for the memes (that I was really looking forward to each week), @2OC3aOdKgwSGlxfz for their insightful answers that helped me a lot (even when I wasn’t the one asking a question they helped me realize of doubts I didn’t know I had haha) and everyone for their contribution to the vocab sheets, that really reduced my workload, especially on this last volume with no furigana.

I have to say my experience overall was positive, I don’t think I would have continued this manga if I was reading it on my own, but the bookclub and everyone involved made it so I could push through and finish it. This is the first manga I finish completely in japanese (I’m on other bookclubs but they are all still ongoing hahaha, slice of life has so many volumes) and I will always appreciate it for it.

I know most of you are participating on the other bookclubs so I’ll be seeing you around!

I know most of you are participating on the other bookclubs so I’ll be seeing you around!

I’m trying to not read so many books at once, but it’s always so tempting to continue a series, or to read along with the first volume in the ABBC! I’ll be joining in the next ABBC book (Japanese Prefectures short stories) but hopefully I can lighten my load in the near future so I can make the step to the BBC.