I don’t use wanikani currently but I ran into trouble with the reorder script resulting in a huge pile of lessons… Stay on top of your vocab everyone… It really helps reinforce the kanji. Studying vocabulary was definitely essential for me.

Thank you for bringing us back on topic

LOL I’m sorry for ruining your derailment fun as well. As @Joeni said, this is a safe space for all us anonymous script abusers

Asking for a friend…

I ordered two by accident!

I ordered two by accident!

Eep, well David is really nice and will probably cancel one… or you could just keep and flip for profit… not that I suggested that, hehe.

As @Joeni said, this is a safe space for all us anonymous script abusers

Absolutely! A safe space to talk of scripts and how they’ve affected us (or rather, how our lack of self control has) or to talk on other things that we wish to unburden ourselves of, like spending too much money on keycaps, haha

Hmm, depends, what does the script to and do you abuse it?

David is really nice and will probably cancel one…

I got an automated email saying they’ll be back on the 3rd September. Hopefully it’ll be sorted then.

Scripts, no matter where they come from, change a person. We must deal with who we’ve become.

Scripts, no matter where they come from, change a person. We must deal with who we’ve become.

Hmm, depends, what does the script to and do you abuse it?

All it does is let you lock a number of the oldest reviews in your review queue so that they don’t appear when you’re doing reviews.

Only two reviews to do at the moment!

Do I abuse it? Oh yeah… I don’t panic about the queue getting larger when it happens I guess.

I have been on WaniKani for two years now, but I have twice taken long periods of time away. When I first levelled from 1-8 I made liberal use of undoing my answers. Because of this, I remebered next to nothing after a few months. So I reset to level 1.

OMG this is me. Except I reset to level 2.

I resolved not to abuse the undo script after the reset. Which means I have a lot of churn from guru back to apprentice.

I’ve also recently started using the lesson filter to push vocabulary ahead in the queue, so that I don’t have a bunch of Level N-1 vocabulary after two weeks of cramming Level N radicals and kanji.

I’ve also recently started using the lesson filter to push vocabulary ahead in the queue, so that I don’t have a bunch of Level N-1 vocabulary after two weeks of cramming Level N radicals and kanji.

I am a user of lesson filter script. I have found useful to plan my lessons to reach 0 lessons 0 reviews once in each level. I post the screenshot in the 0/0 Streak Challenge thread. This way I am sure lessons don’t pile up.

Hello wonderful people, i love the wkstats site and the wallpaper generator tools, but i missed having historical information. So with this you can see how you progressed over time. New Version! https://public.dasding.online/wanikanitm2/ Better performance only fetching new data on subsequent visits fancier graph time-range selection https://media.giphy.com/media/mBYrhEOoPD994DJTGe/giphy.gif Old Version https://public.dasding.online/wanikanitm/ Notes: Fetching data will take some time…

I have found useful to plan my lessons to reach 0 lessons 0 reviews once in each level. I post the screenshot in the 0/0 Streak Challenge thread. This way I am sure lessons don’t pile up.

That’s my ongoing plan for sure. Level up. Do my lessons at a rate that they’re all done before next level up.

it doesn’t look nearly as good as 2.0 yet

I felt like this was appropriate for this thread: 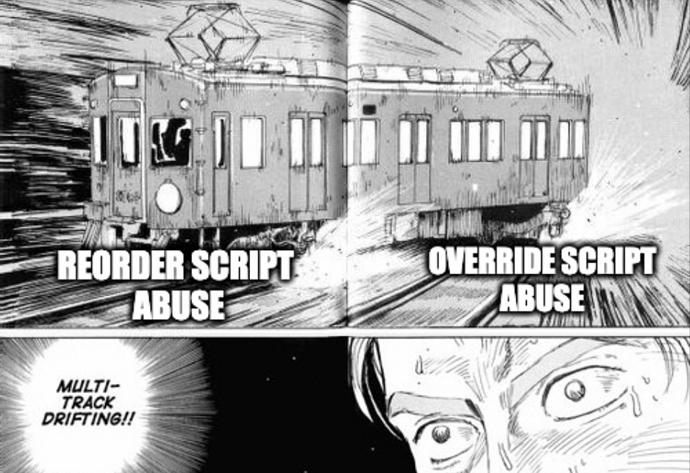 Yeah it is indeed a life saver… my laptop keyboard has been getting worse recently and sometimes it doesn’t register the letter T so if it weren’t for the double-check script I’d be damned.

First time:
I went full speed, going from 1-20 with only a week per level.
I abused ignore/mark as right scripts to the point where I didn’t know half, especially from the later half of levels. I burned out, got a huge mess of a backlog, reset to 1

Second time:
I still pushed 7 day levels, but tried to be more careful with the ignore script. But went in to re-order abuse and when I had a burnout coming on I didn’t stop leveling, just did the radicles and kanji, leaving the vocab.
I went up to lvl 42, but didn’t do any vocabs past the 20’s. I had at least a 1000 vocabs lessons left behind

Honestly, I had “given up” and knew I would reset again, so continued for a but for fun. Last few levels I didn’t even do, I did “always right” script (Can’t abuse worse than that one!

Third time:
Now back on lvl one I joined “team 0/0”
I have had zero lessons/zero reviews and screenshot it at least once per level. Current streak: 41/42. Will get nr 42 before level up (have 4 lessons left, all radicles

)
I try for zero reviews daily if possibly, on good days every waken hour as they come in =P
I took a breather every 10 or so levels, where I stopped leveling and just did reviews.
Still got a burnout! D=
Cause my brain sucks -_-
I am disabled due to chronic fatigue, but it comes in waves.
Reviews pilled up, so even though I had been diligent and gone slow I lost my retention as the items got lost in the limbo for too long. I was now lvl 31.
I decided to kill the pile with “never wrong”, push it to burn, and try again from scratch without resetting the level

So I burned all opened items.

4th try.
Now, still at level 31, but all items burned.
I started un-burning from level 1, first 1 level per week, later 2-3 to get them out.
At first I did all reviews properly. But as I unburned it all it got way too much, so decided around lvl 20 to just push to Enlightened (using ignore script for a repeat) and deal with it later. Theory being that all items I can answer correctly when they come back after 4 months can be properly burned and removed from the pile.
Now my incoming reviews was still a good time off, so I leveled to 42. Actually started leveling WHILE unburning! I stopped just as the Enlightened started coming in. I had zero burns when I reached lvl 42!
I slowly put out all 42 items except the radicles, and just did reviews for the next 4 months!
This is where I am at now!
Next week I will have lvl 31 from the unburn return, and at that point alk the pushed items are either burned or fallen back!
And since a good amount of the items have been repeated 4 times over I did burn a good portion of them

The leeches have been sorted and are now down in the active reviews again (Apprentice/Guru, some less leechy leeches back in Master or even Enlightened)

As of right now: 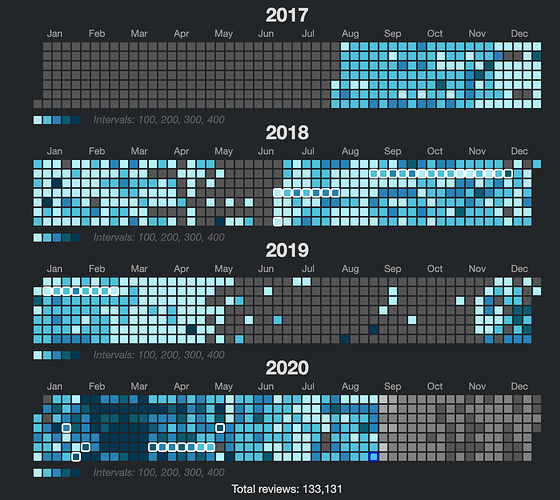 With “annotations”. First go, from February 2017, doesn’t show, The data wasn’t collected untill August 2017 =(
You can clearly see the burnouts, dabbing out to nothing XD
UB - When I started Un-Burning.
Numbers are when my attempts started, and where I reached lvl 42 (for the second and hopefully final time) 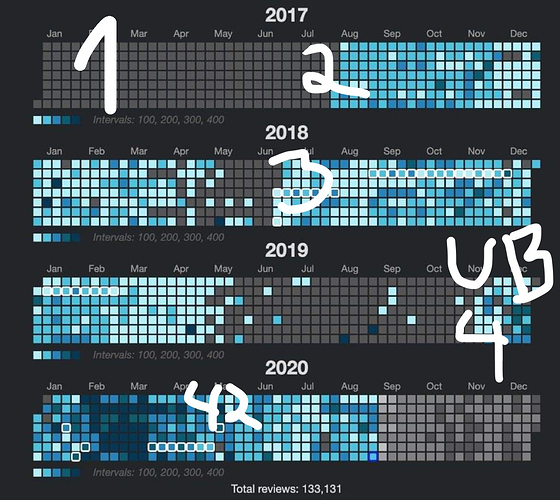 I was hoping for 50% burn by end of next week… But the 20’s had more leeches than I liked. Don’t think I’ll reach 45% burn even. But have about 10% of REAL Enlightened items, with no push, coming in as well, so will have the 50% burn soon enough. Which isn’t bad, considering 26% is still locked =)

When I finish next week I will slowly level again. I’m now in the fast levels but will take my sweet time

I will do lessons when I feel like, vocabs first. Only do lessons if zero reviews. If I spend a month on a level, then so be it. I will not rush it. I’d rather avoid reseting again =P

Confession: I still use the “ignore” script. I can’t live without it. I have dyslexia and English is my second language. It is too demoralising for items to fall back for typos/brain glitch (If I KNOW what the meaning is, but can’t think of the English word, I check and see if I agree with what I thought it was even though I couldn’t think of the word) I try not to abuse it, but I know some, especially Apprentice items I’ve seen one too many times, gets a push for “close enough” at times, with a “I’ll get you next time!” XD

If I had gone slow, not abused scripts and just taken my time, I would have been lvl 60 LONG ago!
Now I’ve been here 3 1/2 years and will probably not reach 60 before my 4 year mark =P

Here is a tip for people that need to reset due to script abuse.

The Item Inspector script will let you see your leeches in a table on the dash board. You can set the script to display the levels of the items. You can set the ordering to list the items in order of level. This way you can see at which levels are the items that give you trouble. You will be able to pinpoint the best level to reset to. Below that level you know the items (few leeches) and above that level you have lots of leeches. (Disclosure: I am the author of Item Inspector)