The second point of confusion was [who’s speaking sounded like 陰の声] - the grandparent? the child? The position of the に particle clarified that confusion.

Oh! I was 100% focused on it being the grandchild. You’re absolutely right, it could be the parents in the background.

Good catch! Once again, paying attention to the tiny particles pays off. I’m not sure how it clarified anything other than expanding the possibilities, but it is open to at least three parties being involved in the call.

grandchild’s pleading
phone call has some help
in the background

I’m proud of myself for guessing the rough meaning of 陰の声 correctly without needing the definition, though my first thought was that it referred to the grandchild begging the parent for something in the background of the parent’s phone call to their own parents. But this way around makes way more sense grammatically and also seems a much closer match with the actual connotations of 陰の声.

Maybe the grandchild is asking the grandparent for money for school or something?

(I was having some trouble getting this to post, so hopefully it doesn’t show up twice

Oh boy. No kanji! Should be a fun one to translate.

Everyone is encouraged to participate, no matter your level! Questions and comments are as valued as translation submissions.

Please try not to be disappointed if your translation isn’t selected or if you disagree with the daily choice: the judge isn’t terribly consistent with his grading (and has awful taste!).
Online tools like dictionaries, sentence databases, and even AI translation engines are fair game and can be extremely helpful. Yomichan is particularly handy if you use the Chrome or Firefox browser. The is also an excellent resource for researching the etymology of various words and expressions.

Once again I felt the urge to diagram yesterday’s senryu. This may only be of interest to me, but I think it might be useful for other beginners like myself to attempt to create your own. It helps me to better understand the basic grammatical structure for some of these: 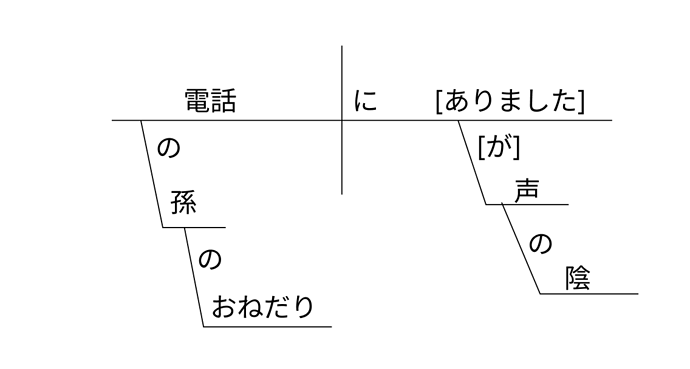 The basic core of the senryu is the sentence 電話に[ありました].

I’d love to know if there is any interest at all in this. I’d recommend trying your hand at it, though. I’ve no idea if I’m doing it correctly (or if it’s even possible in such a different language), but breaking down the constituent parts as modifiers and distilling the basic core of the sentence seemed quite useful to me.

One judgement call: in “stacked の’s” like this it isn’t clear if おねだり is modifying or . I think it could be attached to either in this case.

My attempt below. I’m procrastinating — I should be updating the spreadsheet and doing my reviews.

Where’s the thing?! For that thing — does this. That thing!

3-5-2 but I think it works. Or it would if we could somehow include gestures.

Don’t have to provide a reading today!

where is it!?
the thing that does this,
that—that thing!

The thing I struggled with the most in this was trying to fit it into a 3-5-3, but I think my solution (which was basically cheating) actually enhances the meaning, so it worked out, haha.

I struggled a bit with the weird broken grammar of the middle bit.

The を makes me think the second アレ is a different thing than the first アレ. Does that make sense?

That is, I think アレをコレする means “does this with that other thing”. “It” and “thing” are the same thing throughout your translation, but there are two distinct things in mine. I’m not sure that I’m correct, but the を confuses me otherwise.

I initially worded mine as:

Where’s the thing?! That does this with that thing. That thing!

But the repetition at the end didn’t work as well. (Edit: At least not without italics.)

That is, I think アレをコレする means “does this with that other thing”. “It” and “thing” are the same thing throughout your translation, but there are two distinct things in mine. I’m not sure that I’m correct, but the を confuses me otherwise.

). To me, it reads like “thising a that” (So, アレをコレする あのアレだ is sort of “that ‘thising a that’ thing”). Presumably the speaker is physically demonstrating an action to show how the アレ they’re looking for is used, because the name of the object is escaping them at the moment. In English, you’d probably word that as “the thing that does this”.

These subtle points get harder and harder to express! This one is particularly difficult because of all the placeholder-word ambiguity (the whole comedic point of the senryu!).

I agree that アレをコレする means something like “thising a that” (i.e. “doing this with that”).

My point is that it seems like the middle アレ must be a different “that” since を marks an explicit object in a sentence and the first アレ would already implied in a real conversation. It seems like a real speaker would say something like コレするのアレ if they were both the same “thing”.

In the second version it seems like there’s yet another “thing” introduced, no?

I’m unsure, but I suspect this one intentionally uses bad grammar anyway. I think こうする would be the normal way to express that something does something. コレする sounds weird to my ears.

This one is particularly difficult because of all the placeholder-word ambiguity (the whole comedic point of the senryu!).

I guess I’m not sure that the placeholder ambiguity is exactly the whole point of this one; I think the comedy is in the way that people often refer to something they’re looking for in an abnormal and imprecise way. I’ve referred to things as “the this?” before when someone asks me to pass some food at dinner but just gestures without specifying what exactly they’re asking for.

In that vein, here’s an alternate translation that leans into the abnormal grammar. I chickened out of submitting my first one with “that that” in it because I thought it would be rejected on principle haha.

where is it!?
the that that you do
this with—that!

in an abnormal and imprecise way.

Sorry, what I meant is that I don’t think the specific ambiguity that you were concerned with in your post is the main point of this one. I don’t think the specifics of it really matter, and that you actually need to change it in order to convey the same feeling in English, especially because the demonstratives often don’t translate cleanly anyway

Oh, definitely. I agree it’s not the main point, but
I’d still like the translations to map as closely as is reasonable.

My goal remains to help learners understand the Japanese originals as accurately as possible. Looser translations can capture the spirit but I’d still rather not gloss over small things this.

I’m aware this isn’t a universally popular opinion in this thread, but it’s how I’ve tried to run it from the beginning, and I’ve not changed my mind.

I’d fully support another thread to create poetic English senryu loosely based on these or other lists, or simply out of whole cloth.

3-5-3 translation is even more confusing than the original, but that’s what this senryu is trying to do.

Substituting concrete things for アレ & コレ helps (I think). The writer is looking for something A (=BOOK) to do B (=READ). The writer has discussed their intention with whoever they’re talking to. So, the writer says:

Where is the BOOK?
You know, the BOOK to READ.
Yeah, that BOOK.

Confusing as あの and あれ both mean “that” in English - I had to substitute with proper nouns to get a grip on it. But, Let’s see how much of my well constructed logic holds up to that of 日本語’s.

I don’t think making it concrete settles the disagreement.

Just looking at what’s around me for a concreted example, I read this one as something like:

Where is the pick?
The pick to strum the guitar.
That pick!

I’ll ask my wife since more than one of you feel that both “things” are the same. It sure seems to me that it would have been worded differently if they were. こうするやつ is the same number of 音, for example and also humorously ambiguous.

But it’s possibly not a clear cut answer.

How certain are we that the を could still be used for the same thing? It sounds a little off after that first sentence to my ear, but it seems I’ve yet to win a disagreement in this thread. I can always be wrong.

I know I’m late to this, but I don’t understand the meaning of your English translation at all. What’s happening in this senryuu?

where is the thing?
The thing that does something with this other thing.
You know, that thing.

Others believe it’s the same thing in all three stanzas. I think アレ is something different in the second.

Where’s the thing?!
For that thing — does this.
That thing!

Is admittedly difficult to parse because I tried to keep the syllable count down while still keeping them different things.

Where’s the thing?!
That does this with that.
That thing!

Might be easier to parse but really needs the italics.

Where’s the thing,
The thing that does this,
You know, that thing

It is very direct, and I haven’t read all of the submissions granted since there is a lot of notes, but when I read this the アレ does not change for me. It’s the same thing the whole time and I think the humor comes from the fact that whoever is saying it doesn’t remember the word for the thing.

I have said this exact phrase before just due to my limited Japanese skills at work and with my boyfriend so I might be biased, but I don’t see how the subject would change to a different thing.

Oh I meant the one before this one, about a kid being on the phone or something

It’s the same thing the whole time and I think the humor comes from the fact that whoever is saying it doesn’t remember the word for the thing.

Thank you! This is what I was trying to say earlier, haha, but wasn’t doing a very good job conveying

If anyone has said this exact thing before, why did you include the アレを in the middle phrase, repeating the word アレ？ It’s unnecessary at best if it’s the same thing. It’s mandatory if they are different.

I’ll ask a native. I’m honestly surprised that I appear to be the only one with this interpretation. It means I’m likely wrong, but I’d still like to check with a native.

I don’t mind being wrong, but I’d like to understand why I’m wrong.

I meant the one before this one, about a kid being on the phone or something

The notes summarize a very long discussion as well as I’m able. It’s about a child on the phone with his grandparent, with mystery voices in the background of the call.

I can’t summarize it any better than that, I’m afraid. You’ll have to read the entire chain of replies if you need more.