Anyway, how about my fav’ word (might be easy, since I’m throwing it around all the time)
魑魅魍魎

I was considering this one as my question, but surprisingly a lot of people seem to know it so maybe its actually somewhat common.

I have 鞦韆 (swing) from this manga: 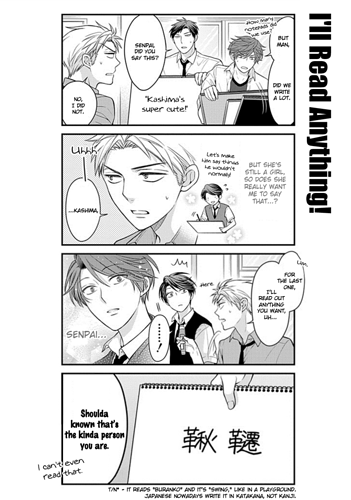 I’m failing to find any context sentences though. Weblio doesn’t seem to have any and I’m too much of a beginner to search beyond that.

I was considering this one as my question, but surprisingly a lot of people seem to know it so maybe its actually somewhat common.

It also showed up in ご注文んはうさぎですか, which I mentioned on the forums a while ago. So yeah, maybe it is actually somewhat common.

Pfft, now leebo will look like a noob if he doesn’t know it :3

Also am I the only one who thinks the title should maybe be different? I usually don’t pay attention to threads with japanese titles because it’s the japanese only section most of the time which I don’t bother to read. Had it not been for leebos thread, I wouldn’t have found this one because I was ignoring it

Maybe having a title that would catch people’s attention would get leebo more questions in this thread.

Yeah, I mean I can only speak for myself but that certainly caught my attention when I read it.

I just assumed people wouldn’t post in his original thread as time went on, so this one would be the only one showing up in recents

Waits patiently for people to come

Im curious how much leebo will actually get, though. I mean, I know he has a higher level than me, but some of these questions were pretty tough lol. Hopefully the entire video isnt him being stumped.

Anyone have a good source for sentences?

I just type the word + 例文 in google. Usually weblio is what I end up using tho

I love this site: http://yourei.jp/

Gee, thanks. I wonder why I didn’t try that before

Ohh, I should start using this. It seems like a better version of http://jp.wordmind.com/ without the english translation

I’ve had it bookmarked for years, I might have seen it on Tofugu’s Japanese resources newsletter at some point. It’s been a great resource so far

I’m reading the great book Breaking Into Japanese Literature and some of the sentences below, all from Ten Nights of Dreams by Soseki, utterly stomped me. But I don’t know if the average native person can read that stuff easily or if it’s actually super hard. Let’s see if it stumps Leebo

Last one just for fun :

Ok, since I have 5 minutes, here’s one that would not stump a native, but would definitely trip up a Japanese learner:

All of these seem really good submissions, but there is a limit of one per user, so you (and everybody else) should narrow it down to your favourite by Friday, I think.

Whoops didn’t know that. Well, the first one, then.