I’ve not been doing much wanikani, but I’ve been listening a ton! It’s true that passion can really drive you…

I’m just popping in to say I’m not sure if I want to host a fall challenge, so I’m putting it out to anyone else who wants to make the thread. I would join if someone else wants to take charge!

I could do that, unless someone else is very keen to do it themselves. It might even motivate me to actually complete the challenge this time

Just tossing this in here as I’m not sure where else to put it:

Kinda cool to see a loosening up around CBD + a bit of education. I remember just a year ago mentioning to a JP friend that I sometimes take it to help me sleep and getting a very shocked response.

Welcome to the “Listen Every Single Day” Challenge, Fall/Autumn 2022 edition!

Yesterday I watched an episode Yurucamp with real JP sub, and indeed collected a lot of vocabularies.

Today, I watched an episodes of HUNTER x HUNTER (1999), with generated JP sub (after reading half of manga volume first). Indeed, generation is quite inaccurate, but I have files from both GPU method (whisper) and CPU method (SubtitleEdit). GPU seems to be more accurate even with less-than-recommended small model, but some signficant senseless segments, so CPU needs to complement.

So for now, speech recognition doesn’t help that much. I need to know (or able to guess) vocabularies first somehow.

Kinda cool to see a loosening up around CBD + a bit of education.

Perhaps I should learn more about 大○ (not that shopping mall)'s constituents.

Some text written on screen, and I can guess.

I wanted to post about a few more things and then make a wrap-up post, but got too busy at the end of the month and ended up not having the time!

I had another small listening comprehension victory last week! I was working on translating Tokyo Joshi Pro Wrestling’s September 16 show, and for the first time, I was able to actually figure out a puzzling bit in the transcript of a wrestler’s comment by watching the video!

A couple sentences into Miu Watanabe’s comment, the shupro transcript had this: “そこで海外の方とシングルの経験を積めるのはすごいことですし、逆に英語の人…ですかね？ 日本語じゃない人と闘ったことがないので。でも語源？ 言葉じゃない何かで勝ちたいと思います.” I could not for the life of me figure out what “でも語源？” was referring to. 語源 just seems to mean “etymology”!

But then I watched the video, and I think what happened is that Miu says “” (language), then corrects herself to “” (etymology), then gives up on trying to remember the correct order of げん and ご in the word she wants and just says “” (words) instead, haha!

Here’s a photo from the show. This is the rookie Moka Miyamoto, who has a karate background, fighting visiting guest wrestler Mei Suruga, who came last minute in as a replacement for All Elite Wrestling’s nonbinary zombie Abadon, who unfortunately was not able to make it to Japan due to visa issues. Mei took her role as Abadon’s replacement very seriously, haha, and she bit Moka several times during the match. 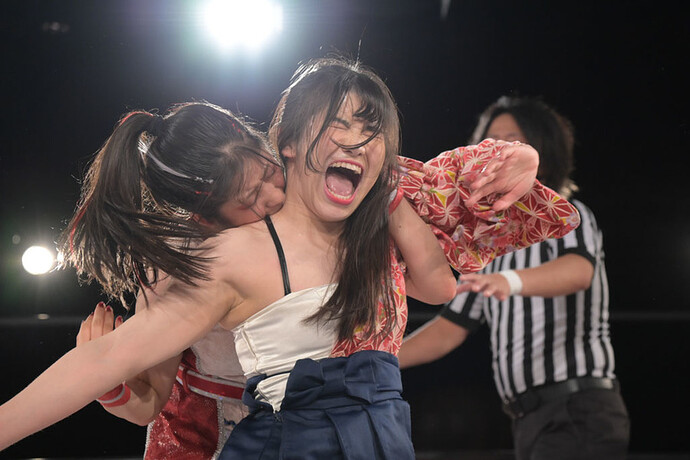 I also finished the show I was watching in Spanish (La Casa de las Flores), so I struggled a bit trying to find something else to watch in the last few days of the month because I didn’t want to start anything new.

I ended up choosing a netflix movie for the very last day of the challenge. It’s called Elisa y Marcela, and it’s a period piece about a real lesbian couple who managed to get legally married by tricking a priest over 100 years before gay marriage was legal in Spain.

I thought the movie was decent, and the dialogue was a lot more sparse than La Casa de las Flores, which made it a much easier listening experience!

I was extremely late to updating this chart and the day counter at the start of the thread, but here we are at the end of the second half of the challenge for me:

It’s interesting doing this challenge two months apart (June and September). I truly cannot believe how much progress I made on listening since the beginning of June. I don’t remember what I said in my reflection post after the June portion, but I seem to recall talking about how listening was very hard for me and progress was pretty slow and I didn’t think I was learning all that much from it.

Well, I definitely have been learning something somewhere!

I’ve made definite gains in being able to transcribe audio and follow along with a transcript/subtitles, including interpreting small bits of audio that did not make it into the transcription. With Japanese, I’d credit my translation work for the vast majority of my improvement, haha. I’m not sure how well my abilities hold up in a non-wrestling environment where I haven’t SRS’d a lot of the vocab and spent hours interpreting sentences.

I’m not participating in the fall challenge during the main challenge period, but I will probably be back for the off-month again! I’ll be listening to plenty of Japanese in the meantime still, haha.

Hopefully I’ll see you all in the other thread in December!

Also unlocking the thread so that polv can keep posting (max number of posts in a row is 3 if I remember correctly?).

While I can’t test this error when over 24 hours, when I am not OP; thanks for the help.

I should accept this one as a possible error. Testing would be a little rude for the actual OP.

It was my first thread on the forum, if i screwed something up I’m sorry. Tbh i have no idea what you’re talking about though, I’d appreciate it if you’d explain it to me.

. We were just talking back then about how WaniKani doesn’t let you make more than 3 posts in a row in threads where you are not the owner / OP. The rest of us weren’t posting for a couple days so I made a post to “unlock” the thread for Polv so they could continue if they wanted.