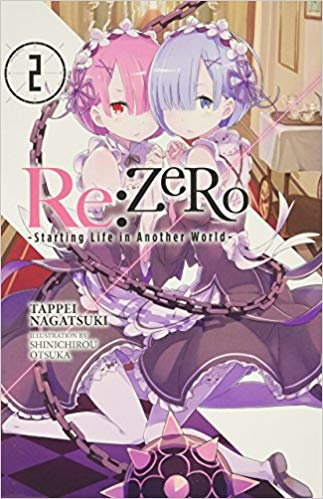 Week 1 Reading: Until the end of the first chapter

Word lists - Learn the vocabulary for Re Zero!

Thanks, I am not using flo flo so I have no idea how it’s working

So did you start reading volume 2 as soon as you finished 1, @icefang97?

He’s done with the series already

So it wasn’t just my paranoia…

On the plus (?) side, I “learned” some new words in the chapter titles already.

On another note, what’s up with the forums? Editing seems different.

Never mind, it’s just that one post. Something smells fishy.

If you’re talking about , I had never seen that word before either

I bought the book, stared at it for a while, and only looked it up some two weeks later. It left a deep impression in me for some reason, I still think about it sometimes.

Oh, there’s another weird word in the title of another chapter. I’ll look it up in two weeks, I guess.

That’s one of them, yes.

It pains me to admit it, but I also had to look up 鬼ごっこ.

pretty sure that’s one I knew at some point.

Just want to take the opportunity to say that this is the only thread in which I’ll be “I’m reading along”, so I’m enjoying it while I can

o did you start reading volume 2 as soon as you finished 1,

yes, I needed something to read. It’s harder to understand than the first volume though

He’s done with the series already

I have a question. Around the end of the first chapter Subaru says:

I can hardly get the meaning of it.

so… hum…
“Anyway, I want to be valued from Emilia??? No, being shine at like a commander from a horse??? No it’s a cat but it’s the same effect what do you think?”

So パック called him 好ましい earlier. So that’s the 評価 that he’s referring to. Something like “If I were to choose, I’d have preferred Emilia-tan be the one to say that.”

Then he goes on about the commander and the horse.

I thought this looked like an idiomatic expression so I looked it up in full in my dictionary app. That’s what I usually do with phrases with weird grammar like this, there’s a good chance it’s an expression. 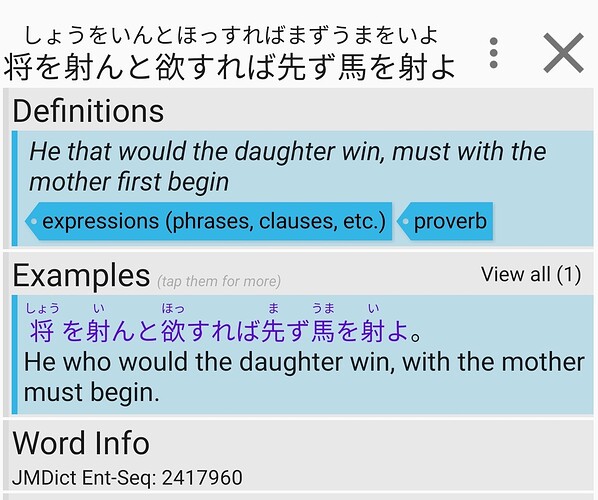 Another translation I found on dictionary.goo.ne.jp is “If you wish to win someone’s heart, you should win over those around him first.／If you wish to achieve a great aim, you should begin by removing all the obstacles.”

So something like if you want to shoot the commander you start with his horse. Only in this case it’s a cat. Would it have the same effect? Subaru wonders.

Edit: Regarding the 方, it’s エミリアたんの方 as opposed to パックの方. You use の方 like this to refer to, for example, just one person out of a party of people.

Regarding 評価 it’s not price/value, it’s more like “how one evaluates something / someone” 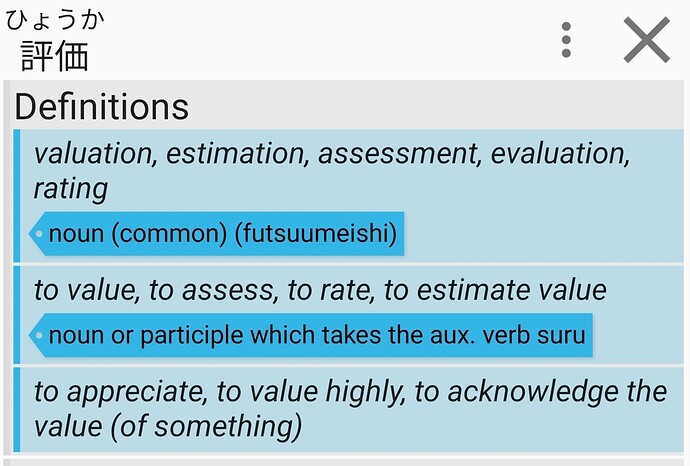 In this case it’s referring to what エミリア and パック think about スバル.

Nice how with the variations in what they say, the author have went through the trouble to make the sister’s lines remain exactly of the same vertical matching length hah

Careful, you just might mark the next poll reading along, too!

I’ll live to see another week, finished it! But it just so happened that I had an accidental day off yesterday. Gotta love those

I finished the reading for the week. After the break, I had to get used to the writing style and the slang again.

Re zero has been the hardest series I’ve read so far, but I feel I’m getting better as we progress each week with it. That being said, I was able to read this week’s in one sitting.

We finally get to meet レムand ラム. They are so 可愛い

It is interesting how difficulty fluctuates. I’m still behind on Haruhi, but the part of it I read this week is so much more difficult than the part of re ゼロ I read so far.

I’m not done with this week’s reading yet, but the first half felt very nice to read. The most jarring was the scene breaks so far. Suddenly, people.

For the people so reading Haruhi, I’m comparing this with the part where 長門 talks like 10 pages about how she’s an android.

Generally I’d say they’re about as difficult as each other, with Haruhi more prone to wordiness and rezero more prone to over the top colloquialness.

Generally I’d say they’re about as difficult as each other,

That’s interesting, I’d personally have ranked the stuff I’m currently reading re:zero > SAO > Haruhi >> everything else, in terms of difficulty

(haruhi mostly just has long sentences and rare vocab sometimes but not that hard otherwise and it also has less text per page on most pages, SAO uses a decent amount of more uncommon words or different ways to write stuff but isn’t super hard gramatically, and I’d personally say re:zero has more uncommon vocab, occasional long sentences, and overall harder grammar than the other two)

Well, I guess people are good at different things! I think a lot of unknown vocab tends to be the main thing that makes me find stuff difficult, so I guess it makes sense that I would find re:zero harder then.

For the people so reading Haruhi, I’m comparing this with the part where 長門 talks like 10 pages about how she’s an android.

Yeah that specific part was hard because of the switch in terminology. But overall ReZero still feels at least 10 folds harder than Haruhi

That’s actually the same for me! I guess this means that I have such a vocab deficiency that both Haruhi and rezero just feel the same to me!?

It’s also possible that I’m just more used to the style of rezero now, since I did 3 weeks of only rezero and no Haruhi.

Thanks for sharing your experiences, makes for a not quite so subjective picture.

h-how much would you say is one fold in, let’s say, scarves?