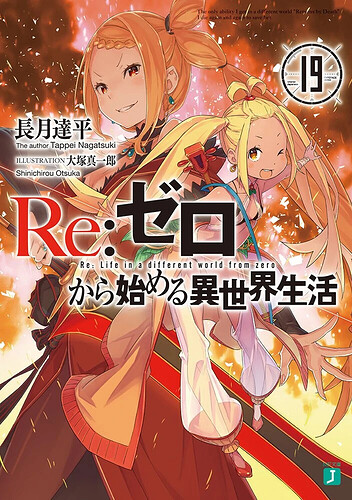 Here you can post all your comments" questions about the book.
This is an independent thread and there is no schedule.
This is part of the Re Zero Book club
Previous volume : Re Zero Volume 18
Next volume Re Zero Volume 20
Rules
-Please keep all information about this book blurred on behind a drop thingy.
-Be sure to identify which part you are commenting on so that people know at which place you are to not spoil themselves.
-I don’t think I need to say it but I will do it anyway. Please refrain from hateful comments or insults.
-Have fun and don’t forget to practice your Japanese.

Just finished this volume yesterday and so many things are happening.

This time I managed to actually see the thread because you mentioned me.

I’m surprised Subaru hasn’t died and restart everything yet.

Properly putting what he realized in arc 4 to good use here. Proud.

I need to speak about how perfect the teams are.

Oh yes! That was the perfect teaming.

I had a question, where was it implied that the dragon was the husband of Garfield’s mom? I don’t remember seeing it but everyone took it for granted.

Can’t answer since I don’t remember the details, but I remember it was clear at some point or another.

Another thing: @mrahhal made me realize that Glutonny had a different name.

Crazy to think about it especially that Subaru doesn’t know that.

100/10. This was the result of everything that he experienced so far and how his characters was shaped and changed by it, and it shows. What a speech, can’t wait to hear it.

I don’t know why Emilia was trying to do by pissing Regulus at the end. Not the best idea. I’m not sure why she does not even remember him.

She was young, and also all that crazy stuff in addition to the freezing happened in between, so probably just that.

Regulus does not want Emilia to smile because he finds it ugly? Weird… His version of love is just I possess you as an object… Interesting.

That’s the same old punchable-in-the-face Regulus for you.

I have a few/lot more thoughts of my own to add. (thanks to the illustrations, I can remember my thoughts at the time)

She was young, and also all that crazy stuff in addition to the freezing happened in between, so probably just that.

She saw him in the trial a year ago though.

Isn’t the last part you added is next book content?

Edit: My bad I got the wrong book… I made a mistake. I wrote stuff for book 18 into book 19 thread for some reason…

A few more think I remembered.

I just finish this book(for real this time)

how long did it take you to get to a point where you were comfortable reading light novels? that’s my main motivation behind learning Japanese and was curious what steps you took to reach this goal.

I think I already explained it in my level 60 post but the short version is… you are never ready. If I remember correctly the first light novel I read was after 3-4 years of self learning. I started because I wanted reading practice and the first book club was created. I started reading 1 hour per pages. Pretty slow eh! I read and read and read until now I can read faster. It’s the habits that help getting hangs of kanji readings, expressions, way of speaking, sentence structures etc… There is plenty of time when I don’t get everything.
I can get the gist of light novels but each of them uses different expresisons, way of writing, etc…
Even after around 6 years of learning I still have trouble sometimes.
I’m kinda comfortable reading but don’t wait until you are because you will never be without practice. I would advice joining a book club (depending on your level) and start practicing. Nothing shameful about asking questions about grammar here.(I did it a lot and still do)
Not sure if that answer your questions but the best way to get good at something is practice.

what steps you took to reach this goal.

My learning journey was full of try and retry, method changing and others. I suggest finding a method you prefer. If you really want to see what I or other people did just look at their level 60 stories. Lots of good stuff in there.

I hope I did no discouraged you and answered all your questions. I really hope you will suceed in your learning. It’s so much fun to know Japanese and has lots of good perks. Reading light novel not translated and annoying your friends that don’t read Japanese that you can read farther than them cough
If you have other question don’t hesitate, everyone is nice here.

thanks for the response, that does really help a ton! I’ll get to it and maybe you’ll see me participating in the LN book clubs in a couple years.