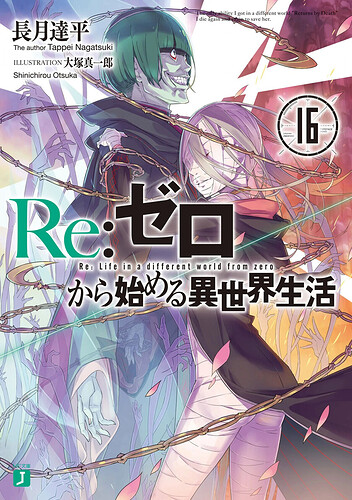 image839×1191 385 KB
Here you can post all your comments" questions about the book.
This is an independent thread and there is no schedule.
This is part of the Re Zero Book club
Previous volume : Re Zero Volume 15
Next volume Re Zero Volume 17
Rules
-Please keep all information about this book blurred on behind a drop thingy.
-Be sure to identify which part you are commenting on so that people know at which place you are to not spoil themselves.
-I don’t think I need to say it but I will do it anyway. Please refrain from hateful comments or insults.
-Have fun and don’t forget to practice your Japanese.
2 Likes
Re Zero Volume 17 Discussion thread
icefang97 April 16, 2021, 9:27pm #2

I look at the first few pages(Pictures only)

Will this be a thread of me talking to myself? We will see I guess

Will this be a thread of me talking to myself? We will see I guess

Well, I’m planning to comment in the various threads as I read, but I do not have volume 16 (15 is the last I have), nor do I know yet if I will ever own it… so maybe? Maybe not?

im only about halfway through volume 4, but just you wait

Sirius said that the boy was brave because he confessed? Is that all or did he got rejected?

I thought she said he was brave because he 'volunteered to stand in for whats-her-name, the girl she wanted to use first.

I took notes reading this volume (somehow I missed when you made this thread), so… I’ll share those when I’m not accessing the forums on my phone. Wouldn’t want you talking to yourself~

Alright! I’ll start this today and see how it goes! Very excited to continue the story (at first I was going to wait for a new anime season, but that might take years

) and see how the novel differs from the series.

First impression, as I have only seen the cover:

and see how the novel differs from the series

Arc 3 was extremely shrunk in the anime, so there’s lots of differences there in the novel. There are a few important scenes that weren’t adapted in arc 4 too. Other than that, season 2 was very faithful. Regardless, you can continue from this volume onwards, you won’t be affected much because of missing scenes, at least for now.

Thank you for that info! I’ll try to be active here, and I will certainly ask loads of questions

I had the same first impression.
I will be waiting for your comments

1 year passed. It was pretty quick to build a mansion. The first time skip I’m sure Napthalene would be happy.

Did Subaru get OP in the process? If not, I was right, and thus happy.

The answer is no but I’m sure you will like this time skip. Not like Subaru really got any stronger. Or at least not visibly.

Well, I dropped the series, so I’ll probably never know.

Or at least not visibly.

Does he finally know how to read and write?

Not much more than before

Is there a vocabulary / kanji list or document help for this book already?

There is none sorry. Not a lot of people read that far so it is mostly everyone their own but if you have questions just ask.

I see! I’ll keep doing it myself, then

I actually have a question: on page 5, in the prelude where there’s the double-page illustration, there was this

I managed to understand by translating it together with “目を〜”, but by itself, I couldn’t find it anywhere. It’s a verb, right? Does it have a kanji alternative? I tried so many combinations to try to find it on Jisho

Yes, this is a verb.

Check this link from it (you’ll need to create an account): 息をこぼしていた

Clicking on こぼしていた will show you the conjugations too in steps:

What’s nice about Lapis is it automatically parses even complex conjugations and grammar points.

Thank you very much!!