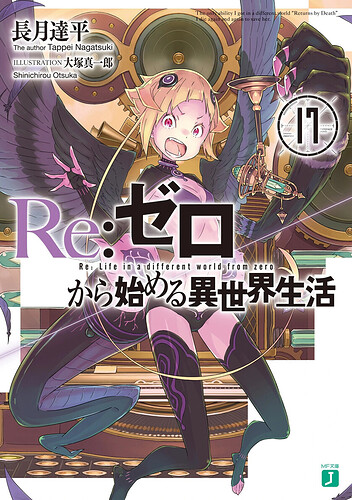 Here you can post all your comments" questions about the book.
This is an independent thread and there is no schedule.
This is part of the Re Zero Book club
Previous volume : Re Zero Volume 16
Next volume Re Zero volume 18
Rules
-Please keep all information about this book blurred on behind a drop thingy.
-Be sure to identify which part you are commenting on so that people know at which place you are to not spoil themselves.
-I don’t think I need to say it but I will do it anyway. Please refrain from hateful comments or insults.
-Have fun and don’t forget to practice your Japanese.

Another thread of me talking to myself

I’m not sure what lust talked about with love. She wants to love everyone? She wants everyone to love her so she can change herself to please anyone? She hates nice words about loving someone?
I like her way of laughing.

The way I understood it, she ‘loves’ everyone, and so she wants everyone to ‘love her’. By her definition, ‘love’ is really just the primal connection between male and female, and moreover, solely occurs in reaction superficial qualities. So she changes everyone else into ‘monsters’, and herself into whatever is it people are into, so she remains the only one asthetically pleasing enough for people to be able to love and not be repulsed by.

He probably died at the end by the dragon’s fire but why he attacked Lust is a mystery.

The dragon is one of the people working at the town hall probably, right? Maybe the fall reset something in their brain and allowed them to resist her or something?

You probably know by now, I’m just having fun theorizing.

About 3 months after I started reading, i finally finished the volume.

I really read half of it in a few weeks, and the other half in about the same time. It’s just I didn’t read at all for 1-2 months.

It’s weird, because I did actually really like it. There’s a lot going on, and we get to see a new status quo, and learn more about various characters.

I also really liked the ガーフィール and ミミ stuff a lot!

congrats on finishing it. It gets even more intense from here.
Yes, I got my answer later on.

Don’t call attention to my problem with numbers please!

Just how do you remember everything?