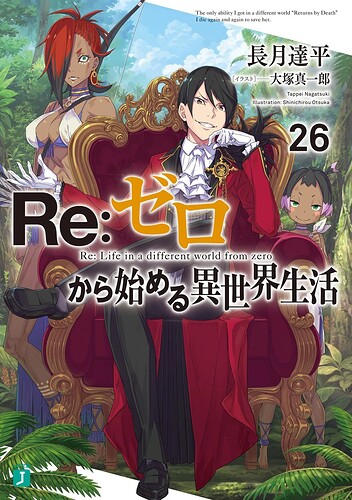 Here you can post all your comments" questions about the book.
This is an independent thread and there is no schedule.
This is part of the Re Zero Book club
Previous volume : Re Zero Volume 25
Next volume Re Zero Volume 27
Rules
-Please keep all information about this book blurred on behind a drop thingy.
-Be sure to identify which part you are commenting on so that people know at which place you are to not spoil themselves.
-I don’t think I need to say it but I will do it anyway. Please refrain from hateful comments or insults.
-Have fun and don’t forget to practice your Japanese.

Hey, it’s been a long time. I was reading some other stuff at the same time so I took that chance since we changed arc.

Fun fact: Since in bookwalker the books are in order of date bought, not on volume number, I started reading Volume 27 since it was in that order. After 2 pages and Subaru summarising this book, I realized I skipped a book ha ha. Kinda spoiled myself there.

ONLY ONE BOOK LEFT T.T
Here are the tag since people want me to tag them:
@mrahhal @HaseebYousfani

Did I? I think I might have just wrote it twice actually

I also remember you mentioning that a few volumes back.

I also remember you mentioning that a few volumes back.

Edit: I remember it was around volume 18 ish