A sword I bought recently has some Kanji on it that I do not recognize. I was wondering if anyone here might know what they are? Here is an image of my attempt to draw the kanji (please excuse the bad handwriting). 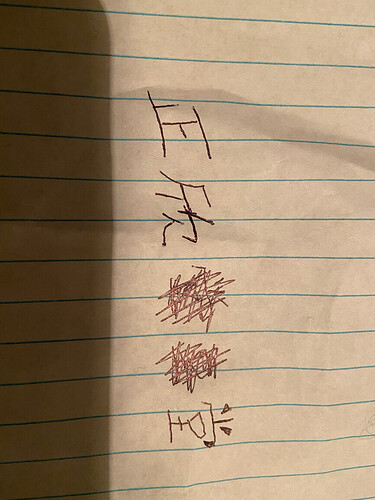 Thanks for the help!

The first one is 正, from level 2 here on WK.

The second one looks like 欣, which is not taught on WK. I’m curious where you saw it, because it’s not very common

EDIT: Oh, never mind, you said it’s from a sword.

It was an old wooden sword I bought on a whim, is all. It was inscribed in the hilt.

Googling for them together 正欣堂 brings up a lot of Chinese results for me. Maybe @Jonapedia knows something about it.

A sword I bought recently

That is so cool

So through googling, it seems to lead to Chinese, so it could just be the name of the company that made it.
Someone asked the same-ish question on HiNative (link: 【「正欣堂」】とはどういう意味ですか？ - 中国語 (簡体字)に関する質問 | HiNative)
With the 堂 meaning like gang/organization/company/place etc. and the 正欣 being code/shortened form of something else? It’s just a possibility though since nothing seems to come up for the Japanese.

Why not post a picture of the kanji on the sword?

Googling for them together 正欣堂 brings up a lot of Chinese results for me.

Yeah, it seems like most of the Chinese results are linked to a clinic using Traditional Chinese Medicine (TCM). It’s quite common to use 堂 in the names of TCM clinics, I think. ‘XYZ (Medical) Hall’ is roughly what it sounds like in that case.

@khudd2 Do you have any idea what sort of sword it is? Is it Japanese (i.e. does it look like a katana/bokken) or Chinese (closer to European sword design, with a something like a cross-hilt and a straight blade)? There was actually a Chinese blog post mentioning a sword with the same characters on it, but I couldn’t open it because it was private. What I did notice, however, is that the same characters appear on a quite a few pieces of calligraphy involving names of martial arts, so perhaps it’s just the name of a calligrapher. Are there any other kanji on the sword?

I would, but the kanji were on a really rough part of the hilt. It makes getting a clear picture… difficult.

It’s wooden, but the style of the blade is definitely more that of a Katana

I see. If the sword were more ‘Chinese’, the other guess I would make would be something about Taoist ritual swords, but I think that’s really unlikely (and I honestly don’t know if they’re usually wooden or made of metal). Besides, I don’t even know if those sorts of rituals still exist or if they’re just a historical relic that appears in period dramas, since modern weapons laws might make owning such items a bit more complicated.

Anyway, my best guess is still that it’s the name of an artisan, though that really doesn’t sound like a person’s name in Japanese or Chinese. Alternatively, perhaps it’s the name of a dojo that once owned the sword. I don’t know if Japanese dojos are named using 堂 though. I think Chinese martial arts schools might be named with 堂 or 館 though, so it seems possible… it was interesting to think about anyhow.