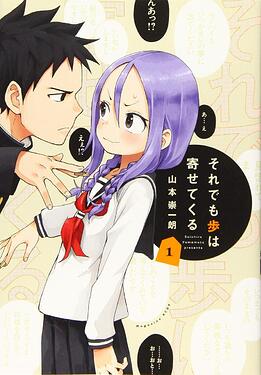 それでも歩は寄せてくる - When will Ayumu Make his Move?

Finished read the chapter 7th and I have few questions this time around!

In case anyone wants to see how 将棋崩し looks like in action:

I read chapter 7 - first without looking up vocab (I hardly understood anything, and it didn’t help that I did not know what a 返事 is, haha), then once more with a dictionary. I think I got the gist pretty well, but there’s a lot of details that elude me.

I’m wondering what’s the best way to approach this, with this being my first manga (and my first book club). Should I try to understand all the details I don’t get, or just be happy that I the gist, or something inbetween? I don’t wanna completely swamp you with questions either.

Personally I think trying to understand as much as possible is going to be what helps you the most - it’ll get you asking more questions, looking more things up, and reinforcing things through repeated exposure (bonus points if you start putting stuff that you notice being common - through frequency info, or just seeing it a lot - into an SRS like Anki)

Don’t worry about asking too many questions - that’s what the thread is here for after all. There will be plenty of people willing to try and help explain something because that’s also a good way of reinforcing grammar stuff

And I think if you can get the gist of something, especially if you’re still fairly early on in your journey, then that’s something to be proud of. You’ve read something in another language, and that in itself is pretty special

Ask questions, as many as needed. We’re covering 16 pages per week. If you ask questions on three pages per day (or more if the pace works for you), you’ll probably find that after a few weeks, the number of questions you have will have steadily decreased over that time.

Should I try to understand all the details I don’t get, or just be happy that I the gist, or something inbetween?

I recommend aiming to learn as much grammar (used in the material) as you can, but don’t expend to understand it all right away. Most of the grammar you’ll see over and over again, allowing it to sink in over time.

people love that shit bro, you could ask a hundred questions back to back and get an answer for every single one haha.
no seriously, take advantage of this fact, i personally go for general gist when i do my solo anime/manga immersion, but i have found going for 100% understanding with the bookclub manga is so so good, i highly recommend it.

First page panel in chapter 7 is bugging me.

The last thing Urushi says. Mainly the 上. I know 上, it’s so early in WK. But its usage here is… new to me, I think. Jisho lists before/previous as a possibility, is it that? Like, is わかった上 something like to already know? As in, like, you knew and were making fun of me? I think something like that is the general gist here, just want confirmation because I’ve exclusively seen 上 used in physical “above” / “raise” / etc contexts.

Not completely sure but I believe 上で here is a specific grammar structure that means “after” or “upon” when used after a verb in the past tense. (Bunpro link).

So basically Urushi thought Ayumu was making fun of her without actually understand what her silly pose meant, and is now surprised to see that she was made fun of even though Ayumu already understood was that 「と」 pose meant.

A possible natural English translation would be:

“Even though you understood (what it meant), you made fun of me!?”

The only thing that I find strange is that 上で is a rather formal structure, which is rare for Urushi to use. Wouldn’t be the first time I see it used rather informally though.

I just started with Ayumu too, but I’ve been here since chapter 1 (and doing plenty of extracurricular reading, recently). Everyone’s already given you good advice but I just want to say, I think just as much of this (or at least it was for me) is initially learning how to parse and figure out exactly what you don’t know. Do your best to look up and ask about anything you don’t understand, but I think you’ll get a feel for where your own attention is best directed over time. There are sometimes panels I think are just too far off for me to bother asking about, but there are usually a few I’m close enough on, and those are most instructive. There are gonna be sentences where just getting the gist is an accomplishment too, and enjoy those still. Either way, asking here is never bad!

Edit: And thanks for the explanation on 上で! Super helpful.

Come to think of it, the only time I recall encountering わかった上 is from Fuuko in Clannad, and she (matching what you wrote) speaks formally to Tomoya and the others as they’re her せんぱい.

Thank you for all the encouragement! I’ll ask away, then!

Upon reading the pages a third time, I’m realizing how many of the parts that tripped me up were just casual ている forms with the い omitted. It’s interesting to see so many instances of something that I knew existed, but which is not really repeated in my Genki 2 textbook after they mentioned it like once.

haven’t answered everything to a satisfying degree, so it would be great if someone else could fill the gaps and correct my mistakes.

I will answer what I can, but others might have some better answers on some of these things.

Seems like all your questions have been answered! I just want to add something about the あんな感じで (pg 61):
I always translate that as “In that way”. The “Impression” translation that @wanikani_94032 and @MrGeneric use is probably closer to a literal translation, so maybe sticking with that is better… But maybe this makes the sentence feel more natural.
So the whole sentence reads as “… So in that situation I have entered in that way…”

This is the perfect time to mention: when you’re first starting to read, much of the grammar and explanations here may seem a bit all over the place. That’s because there’s a lot to take in. It’s perfectly fine to not absorb most of it right away. You’ll be seeing the same grammar over and over. You may recognize it a little bit next time, or you may not recognize it at all and ask about the same grammar in a future sentence. That’s all part of the process.

I have finished Chapter 7, and will read Chapter 8 tomorrow morning. My questions are pretty much just the ones leftover in my response to @TobiasW above, so nothing extra on that front, but I do have to say I love the art style of this manga. Some of the facial expressions legitimately make me burst out laughing. The two in this chapter that got me were:

And thanks for the additional translation. DeepL and Google Translate also think it might be “like that”, which is really close to yours.

@ChristopherFritz
Thanks for the reassurances! Don’t worry, I might ask a lot of questions, but I’ll take it easy if I don’t understand everything perfectly. I got a bit stressed earlier while learning Japanese, e.g. about groups of words that seemed to say the same or with subtle differences, but these days I’m a bit more relaxed and open to ambiguity - it’s a long game and it’ll all become clearer sooner or later.

One question might still be open (or at least unsure):

…also, sorry for the post spam. I considered to make it into one post with name tags halfway through, but then realized I cannot actually delete my previous posts without still leaving a “[Post deleted by author]” post. Next time it’ll all be one post, I promise!