It feels so low effort and barely worth it but I’m keeping the habit. ;_;

I finished the second half of chapter 6 of ミッツ星カラーズ。

I also saw a friend today, for the first time since my birthday. So I got presents

Namely the Kadokawa Tsubasa Bunko editions of 君の名は and 天気のこ - excellent gifts at the best of times, but especially perfect while I’m in the middle of a read every day challenge!
I’m going to be disciplined and finish レンタルおにいちゃん before starting either of them though since I only have 4 more chapters.

I did it. I started Honzuki 8

This was not according to keikaku, I wanted to read more Saikawa & Moe, but the Honzuki book on my digital bookshelf was staring at me, I couldn’t stop myself from opening the book, and then I got so excited I ended up reading all morning. Hopefully I can balance reading the other books too?

Also randomly had the realization that one of the characters has a pretty similar hair style as Kuroo from Haikyuu.

January 23 update:
Read 5 pages of 時をかける少女 today, i.e. chapter 16. The story took a somewhat unexpected turn. I was almost sure that Kazuo was somehow involved in this, but the explanation he provided was much more elaborate than anything before had been hinting at, especially coupled with his newly introduced device. The conversation started in the previous chapter is still ongoing, so I guess there are more details to follow. (I had no time to read another chapter, but couldn’t resist peeking at the title, and it looks even fancier than the explanation so far

Yesterday I read this week’s Death Note assignment as well as the first half of this week’s 笑わない数学者.
Today I finished Demon Slayer 3 and continued 笑わない数学者 (I hope I can finish this week’s reading later today).

And another week, success!

Oh also I forgot to ask, @chrisosaurus are you still interested in my vocab list from volume 3?

Only one chapter of 時をかける少女 today. I think I need to count chapters again, because I’m somewhat unsure

(Should be 15 if my previous count was right?) Kazuko went to school and everyone was confused as she suddenly had disappeared. Aaand she’s once again at the place and time where it all started. And there we conveniently stopped. ah!! I also found Kazuo a bit suspicious this chapter “夢みるような目つきのまま” and all that, but maybe I’m just thinking too much.

So I finished 山田くんと７人の魔女 １ today. This challenge has been the best tool for getting practice in Japanese reading for me so far. I’ve always had the goal to read in Japanese but I’ve never actually sat down and followed through. Now I am glad that I finally started. I am recognising more and more kanji and vocabulary in ‘the wild’ and not simply relying on my memory to follow the plot. However, I will still be reading manga that I’ve read in English for the next while. I am not confident enough to branch out as yet. Since I’ve just finished a shounen manga, next in the pattern is a shoujo manga. So tomorrow, I will try out 会長はメード様 1 again and see if I can get past the wordy dialogue. If not, then I will have to try another shoujo manga. I have many on Bookwalker to try out.

I love the kanji of this color, they’re so descriptive - 東雲, eastern clouds

Apparently 東雲 is an archaic word for daybreak/dawn. Why did we stop using this as a mainstream word for dawn, though, that’s what I wanna know

Today’s reading talked about 春菊 (しゅんぎく) - edible chrysanthemum/crown daisy/garland chrysanthemum. It’s supposed to be good for your respiratory system and gastrointestinal tract, as well as your autonomic nervous system.

Hm, now we have chapter 4 centered on a completely different person

I love this chapter so much though, it’s so sweet and cute <3 Today’s tanuki candidate (this is what I’m calling them now) is basically a host club guy who’s a big a-hole to this little boy (because the boy accidentally bumped into him and got ice cream on him) - as a result, he gets turned into the most angry-looking tanuki ever xD 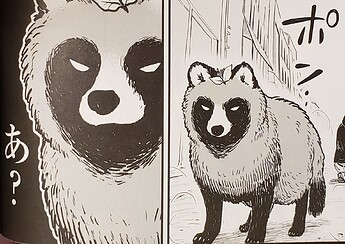 Today and yesterday I read some Death Note (almost finished the part the book club’s supposed to read this week). Reading this I’m realizing I need to work on grammar so I’ve been getting back to that too.

Also, I got Chi’s Sweet Home 1 today and got about halfway through. Definitely an easy read, but it’s kind of a nice change from having to analyze every sentence to only needing to look up a word here or there

I was struggling a little more today with sentences I should definitely theoretically be able to understand – perhaps just an off day for me. Not bad enough to be a true bother, not at all, just lots of moments of not quite putting the pieces together right, or a sudden shift in unstated topic catching me off guard, or the like. Played for an hour and 20 and had already mined too many words, plus it’s getting late.

Much more dialogue today, as I ran into two new characters. One of whom, is Umi: 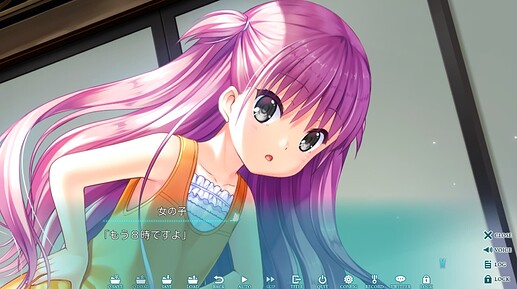 We’re going to have the childish sibling-type character in this game it seems (though not a literal sibling, a… cousin? I think? This isn’t a reading comprehension problem, either it’s intentionally vague or was mentioned briefly and my memory is failing). And of course, that has to start with her trying to drag us out of bed. Not exactly breaking new ground in this VN so far, but it’s got great production values for what it is, and while it’s too early to know anything substantial, I’m finding that it flows nicely so far. I also love the aunt’s voice acting. She’s probably exaggerating pitch a bit; everything she says is almost sing-songy and it’s just really pleasant to listen to.

The neat new word of the day is 夢見心地 (ゆめみごこち), “dreamy state of mind.”

Oh yeah, one of these days I need to remember I’m in a book club or two…

My listening level is I recognize this. This is Japanese.

Haha, well said. You know, there are a few people I’ve come across who slur enough that even that is almost an achievement.

This was on a different story, but please enjoy this image of a fox and a cat enjoying a kotatsu together:

I just need to indicate how much I adore that picture, and a simple “like” isn’t enough.

I love this chapter so much though, it’s so sweet and cute <3

I decided to click through for the spoiler and wow, so sweet. Had never heard of it, but what you’re reading looks really nice.

If it isn’t any additional effort for you, then yes please I’d love it =D

I attended a 3 day wedding and needed some reading for the train and down points of the wedding, I didn’t feel comfortable reading manga/鬼滅の刃 in that context, so I started 星の王子さま and found it quite funny although a LOT of work - the shift from manga with picture context to full sentences is really a lot for me.
It was doable and fun, just slow. Post-wedding though it was a bit much for me to keep reading that alongside 鬼滅の刃 so I’ve re-parked 星の王子さま for now.

I’ve also started reading デスノート with the Beginner BC, so far so good, read the first half of this week’s assignment in one sitting in a little over an hour. I’m expecting this good progress mostly comes down to this being chapter 1 and me having a lot of context. Later on it will presumably get rougher.

Still working my way through ファイナルファンタジーIX in Japanese, taking lots of screenshots and writing out the lines to do breakdowns.

I’m still thoroughly in the character introduction portion, so it’s fun getting to meet them all in book form! Looking forward to meeting some of my faves, I miss them haha. The twins (who I honestly forgot about lmao but I’m reminded now!! I love them!! first being introduced with them stepping through the ceiling is just… so in character

And ハイジ’s a (loveable) weirdo as always, and (yeah that’s his name, on the nose huh) is already just like “what is going on”

very relatable. (foreshadowing spoilers) I already know is going to scar me, it came up like once and I’m already tense lmao

I do miss the ビスコ squad so I’ll definitely have to go back to them sometime, but this has been a lot of fun too! It’s really nice to be in the world of つよ again

皆さんこんにちは、久しぶりですね
I’m glad to say that I’m on Chapter 3 of また、同じ夢を見てた and realised a very weird thing about myself: I’m more likely to stick with a book that I randomly selected than one that I actually want to read

Has anyone read that book before?

I’ve decided to stick with weekly updates due to the surprising amount of work from school!

Weekly check in for January 23rd:

Thoughts:
I haven’t actually read anything since Thursday because life got in the way (in the best way possible) and I was away for a long weekend celebrating my best friend’s 30th birthday. Back on it this week and will probably try to get the last couple of graded readers for this level thrown in to break up some of the hard work of reading Kiki. I’m also revising the previous chapter of Kiki before moving on just to make sure I’m taking the time to understand more complex grammar/unfamiliar vocab. As always, the best thing is learning new Japanese onomatopoeia!