Today was another low-energy day for me, so I just read a little of 2.43, since my hyperfixation makes it feel like it takes less energy to engage with, and started rewatching the anime again, with ENG subs since trying to watch with none would take too much energy rn.

I watched 3 eps of the anime, though I wasn’t particularly trying to listen like I generally do these day. But I did hear Itoko telling Yuni which kanji the name of Chika’s former middle school is spelled with (before reading the LN, I’d always wondered how he knew how to spell it). And, I heard that Chika did tell Yuni to draw 人 on his palm and swallow it when he was nervous during the second match in ep 2, just like in the novel! That’s a completely different feel than him just telling him, “Well, figure out a way to calm down,” in the subs. He actually tries to help him, even if he doesn’t really know how, doesn’t just leave him out to dry. The subs make him seem uncaring, when that’s just not true at all. Awkward, and not sure how to deal with people, yes, but uncaring, no. (He’s autistic, not a robot.)

There’s still so much I don’t know though lmao, all I’m doing is getting more questions!! It’s a great time as always though, I’m anxious to find out more

I plan on getting the game eventually

not like I’ve been able to shut up about it ever lmao, but based on things you’ve talked about enjoying I’d certainly think you’d like it!

This is the first challenge I’ve joined! I started a bit late but I ordered some manga and just got them on Monday so I’ve started a habit of reading everyday.
I’ll be reading:
レンタルおにいちゃん 1 and シャドーハウス 1
Maybe start something else too

Mid-July update! What have I been reading this month?

Calendar for novels only: 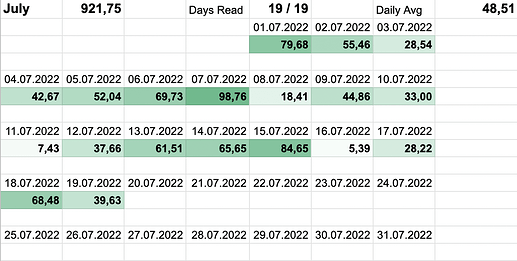 I also started tracking my reading time on July 5th, so I have pretty reading statistics to show for! 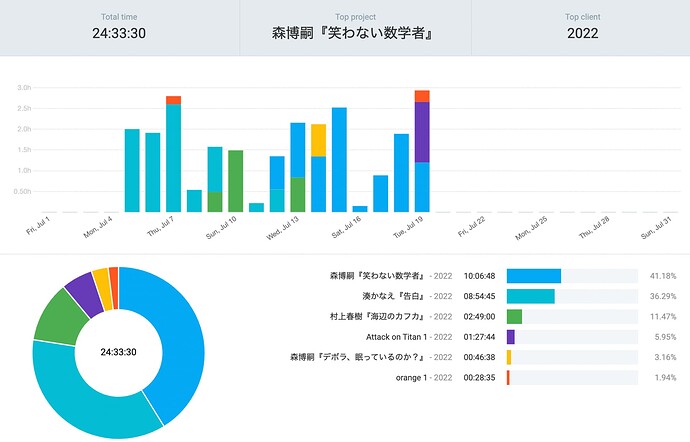 Hello everyone – I’m just a couple of days on this forum and already I am participating in my very first challenge here. Pew, quite some work to figure out how this works, but I think I’ve got this, now. It will be a hard one as I am a WaniKani Lvl 3 and worked through chapters 1 and 2 of げんき１ a while ago (need to re-read those, I fear), so don’t expect much from me. My goal is to make it a habit to think about reading Japanese every day – hopefully some day I’ll be reading whole books and participating in the book clubs, but for now I am content with just getting into the habit and if it’s just one sentence for which I consciously sat down to read it.

Activity log
Yesterday (2022-07-19T20:00:00Z), after asking here and reading around on the other topics, I stumbled upon Graded Readers and found this link, where I read the sample page: How to start tadoku – にほんごたどく – not much but we all get to start somewhere, no? I researched on getting them through eBay or Amazon, but decided to postpone this for next week.

But today (2022-07-20T06:00:00Z) I found this helpful link: Graded Readers and Parallel Texts "Book Club" which also contains PDF versions of some graded readers material; while I rather have physical books I love this material and it is actually quite good, once you understand how they work. Took me a while to get that it was talking about the color 青 on the first pages (I actually fed google translate with it), and I was irritated to learn that this actually has two meaning

I also read a page (edit: 2 pages) of the prefectures book. Things are quite busy with packing/work/life admin.

More reading before work. A little over halfway through volume 3 of 少女革命ウテナ now. The manga is deviating from the anime quite a bit, mainly in that the story lines / relationships are vastly simplified down into the essential components only. Given there’s only 2 volumes after this I really wonder what kind of resolution there will be, although I think there is a follow-up series.

For anyone curious about language difficulty, there is an increase in unusual grammar from the 2nd volume on, but the sentences are still quite short and the choices are highly stylistic. It’s nothing I’d consider regular everyday grammar so if you can get the meaning you can move on as you’re unlikely to encounter it again soon.

Only read page 116 of かがみの孤城 today. I realised not getting enough sleep takes a big toll on my motivation, which makes me procrastinate even more than usual, and then I go to bed late and wake up early, and the cycle starts over and over again…

At 9pm I had a trial (online) tutor session for Japanese conversation practice with my Korean friend and her tutor, who can only speak Korean and Japanese. I found it hard to understand a lot of times (partly due to the bad reception, partly to simply not knowing the words) and it was difficult to express myself, but I’m sure if I continue this my speaking ability will improve fast!
After that I did literally nothing.

I didn’t even do WK reviews, or read かがみの孤城 until ten minutes ago, which was what I stayed up for. It’s nearly midnight and I have to wake up at 6am the next morning… hopefully I can catch up on sleep (and reading!) tomorrow night lol.

I could finally set up the Loopers VN with textractor and read the prologue for the club. I wasn’t sure what to expect but it went by pretty quickly.

Then I (re)read chapter 4 of 青のフラッグ. I’m hoping to finish re-reading this volume in the next session so I can finally start with new content in Vol. 2.

I also reaaaally want to finally get started with ビブリア.

Random article - didn’t even know what cross-bedding was in English, there’s also lots of geology-specific words here that I had to look up that I don’t think I’ll encounter again any time soon (but you never know)

Japanese found in the sand

Today read 9 pages of よつばと! in order to note 10+ new words/expressions. That said, not all of them are “new,” per se; I find myself recognizing words without remembering them (like かしら), or looking words up and realizing I’ve encountered them before (like ようじ in hiragana, which I recognized when I saw the kanji [用事] in the dictionary), which is to be expected but means that my lists sometimes annoy me, as they remind me of the things I’m not absorbing.

I thought for the longest time today that I might read two chapters, but I ended up doing other things in the afternoon. I’m having some vacation time right now, and I’m enjoying it. ^^

I’m so glad chapter 4 went well for Hanabi. I can’t imagine her anxiety leading up to the conversation with her parents.

I like how easily I’m reading this novel (some call it a light novel, but from what I understand something is only a light novel if it is called such by the publisher and I didn’t see that on book buying pages? Light novel vs novel distinctions seems to be non-existent from reading discussions about it here on the forum; but I could also have missed it?).

There have been maybe a couple of sentence across 4 chapters that have had me scratching my head a bit, but since I’m not reading this full comprehension move, I tend to move on pretty quick if a couple of rereads doesn’t clear it up. Also, so far I’ve not been completely confused, so context around it have always made it pretty clear what is going on.

from what I understand something is only a light novel if it is called such by the publisher and I didn’t see that on book buying pages? Light novel vs novel distinctions seems to be non-existent from reading discussions about it here on the forum; but I could also have missed it?).

Yes, but personally I (and other people) pretty tightly associate certain tropes and writing styles with light novels. Two books I’ve read that I went “hmm… Was this actually a light novel?” I went and checked the reviews and saw Japanese people saying the same thing.

If it’s not “officially” a light novel I call it light novel-ish to get around it.

I can see that. Personally, I don’t have any experience with light novels so I wouldn’t know what the common tropes are. (Nor do I have experience with Japanese novels…)

So it is due to tropes/writing style that people have called 夜カフェ a light novel.

However, for me personally, this would be my first novel (ニャンニャン探偵団 is half picture, half text, so 絵本 I guess?), so in that way it benefits me to call it a novel. xD

Although I guess I could say the same for calling it a light novel since it would be my first there too, but novel comes with a bit more prestige, doesn’t it? xD

As I mentioned in a previous post, I finished the first story, and started the second. I’m finding it a little bit harder, as it’s almost all dialogue up to now. Different feel to the first story so far, I wonder how it develops.

Interesting expressions I came across:
やるかたない - unable to clear away one’s negative feeling, not able to do anything (about…)
訳知り顔 - know-it-all airs
手を焼く - to be at a loss, to not know what to do with
いたちごっこ - going around in circles, pointless and repetitive back-and-forth. (いたち means weasel, and the original meaning of いたちごっこ is a children’s game where the two opponents pinch the back of each other’s hands in turns?)

I like how easily I’m reading this novel (some call it a light novel, but from what I understand something is only a light novel if it is called such by the publisher and I didn’t see that on book buying pages? Light novel vs novel distinctions seems to be non-existent from reading discussions about it here on the forum; but I could also have missed it?).

Yeah, it’s like manga genre definitions – there’s a strict definition that says ‘shounen is anything published in a shounen manga magazine’ and so on, and a looser definition that is more “I know it when I see it”. Similarly if you want an “always gives a bright line answer” definition of “light novel” you kind of have to go with the “which publishing imprint is it”, but because in practice light novels aim at a particular reading audience they tend to have enough traits in common that you can use a loose definition too.

For me, at least, a light novel is a subtype of novel, rather than a completely separate category, incidentally.

The vocab is fun. Lots of katakana and technical terms. Most of the katakana are familiar stuff, but other than those I essentially have to look up everything. But that’s fine, I have a low threshold for utilizing yomichan. If there’s anything I’m unsure about I look it up. It’s almost like SRS in a way.

Sometimes I make mnemonics, sometimes the mnemonics make themselves. For instance, just one radical sets this pair of words apart: 捻る and 唸る. (ひねる and うなる). I’ve been struggling with remembering the correct reading of the latter one (almost believed it was ひねる). However! This time the latter showed up describing a character going 「うーん」. That’s similar to the sound of うなる itself. うーん(aru). Not too farfetched imo xD. In addition, it makes sense that the mouth radical would be used for that meaning. Meanwhile, the hands/fingers radical is used for the “to twist” meaning (ひねる). So, I didn’t construct any mnemonic, it constructed itself.