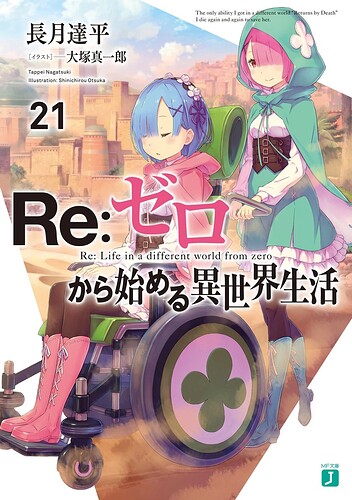 Here you can post all your comments" questions about the book.
This is an independent thread and there is no schedule.
This is part of the Re Zero Book club
Previous volume : Re Zero Volume 20
Next volume Re Zero Volume 22
Rules
-Please keep all information about this book blurred on behind a drop thingy.
-Be sure to identify which part you are commenting on so that people know at which place you are to not spoil themselves.
-I don’t think I need to say it but I will do it anyway. Please refrain from hateful comments or insults.
-Have fun and don’t forget to practice your Japanese.

The new arc begins and lots of actions in it.

Only 5 books and I can speak about all my Re Zero theory with @mrahhal I will reach you level of Re Zero enlightnement.

Ah how I wish to be able to join in this reading, but my Japanese isn’t there yet. Unfortunately I’ve only been able to read the WN of this arc. Definitely my favorite arc as of now, hope you enjoy it as much as I did

Keep practicing. One day you will be able to read it

hope you enjoy it as much as I did

I really enjoy it a lot