Level Up Work Around

If you’re like me, you may be thinking to yourself, “Why did I just level up? I haven’t even completed all the vocab for this level yet.” If you’re not like me then read no further haha

Still here? Well then let me tell you about a nice work around to leveling up too soon. It’s not perfect, far from it, but it is a way to stay on your current level until (most) of the vocab are complete!

So why do we level up? WK requires only 90% of the Kanji to be Guru before you can move to the next level, that’s it, it doesn’t care about the vocab or the last 10% of Kanji.

Why do I not like this? Well I’m a completionist, I don’t want to move on until the level I’m on is at 100% for Kanji and Vocab. Also seeing my lessons go from a relatively small number to a really huge number all while never hitting zero isn’t satisfying.

My previous workaround was installing Kumirei’s True Level & Reorder Omega script to keep my lessons focused on my current level. This has quite a few issues: first, it takes a little bit for the userscripts to load in, so I see what my real lesson number is before it refreshes, and second once I level up my progress bar below the extra study section moves on to the next level.

My new solution isn’t perfect by any means, but I think it works better than my previous solution. At least until WK devs allow us to choose when the system levels us up (they say it’s on their to-do list).
So what is that solution? Simply never reach 90% until most of the vocab is completed. I do this simply by using Reorder Omega to switch kanji for vocab when I’m 1 kanji away from 90%.

For example, here at level 4 there are 39 total kanji, 90% of that is 36. So if I only do 35 Kanji and then switch to Vocab, I’ll never level up until all the available vocab is complete. Then I can swap back, finish the 4 kanji, get them to guru, level up, finish off the remaining vocab that unlocked, then move on to the next level.

It’s a little messy, I’ll be honest, but it does the trick! I also created a script that shows your vocab progression, you can find it here!

Why do I not like this? Well I’m a completionist, I don’t want to move on until the level I’m on is at 100% for Kanji and Vocab.

While you can’t do anything about the last 10% kanji to guru + vocab, you can plan out how you guru kanji in general. Never guru kanji in one huge group at the end of the level!

Spread them out in time, even if it’s just over the same day, and the immediately do then following vocab lesson. Toward the end of the level, you shouldn’t have all that much vocab left. Especially if you only have a handful kanji left to guru.

At the end of the day, there is little need to worry about the order of completing lessons, such as the last 10% kanji and vocab. They won’t affect you moving forward. And if you don’t use any reordering, guruing those kanji will move the unlocked vocab lessons to the top of the lessons queue. So, you’ll finish them long before finishing the next level and so on.

This. But to piggyback off of that, just focus on doing the same amount of new kanji every day or at least the same amount of apprentice items and you’ll level up pretty consistently. When I did everything at once it took me 7 days to level up, which is cool, but now it takes 11-13 days and I feel like I am genuinely learning the words now, which is much more important.

So why do we level up? WK requires only 90% of the Kanji to be Guru before you can move to the next level, that’s it, it doesn’t care about the vocab or the last 10% of Kanji.

Thanks! I was wondering what was going on.
It does feel cheesy to level up while still having a big bunch of vocab remaining, but I can’t be bothered about installing user scripts. I just live with it.

Everytime I level up I spend another whole month only doing vocab for that previous level, crazy. It started becoming like this after hell levels. Before I was leveling up in 7-10 days altogether.

I actually think I move pretty slow compared to other WK users, I only do 5 lessons a day; whether that’s 5 radicals, 5 kanji, or 5 vocab (though sometimes I do more vocab if it’s super easy stuff like numbers and counters).

That’s my progression, but I do my reviews almost immediately when they appear, I really enjoy the reviews. So I feel like I spread them out pretty well. My only issue with swapping back and forth between kanji and vocab when the vocab becomes available is that it takes about 2 days to guru a kanji which means there’d be a little gap where I’m not learning new things because I’m waiting around for the vocab to unlock.

And if you don’t use any reordering, guruing those kanji will move the unlocked vocab lessons to the top of the lessons queue. So, you’ll finish them long before finishing the next level and so on.

I mentioned it in my post, but I really don’t like having a bunch of lessons in my queue, I want to see that number reach zero (or close to it), plus doing this will have my Progression Dashboard move on to the next level, so I’ll constantly feel behind because I’m still doing last levels vocab but WK wants me to start learning my current levels kanji.

I can’t be bothered about installing user scripts.

It’s actually surprisingly easy to get user scripts up and running! It was daunting thinking about it, but when I went for it I found it was actually really really helpful for my learning! I’d definitely recommend it!
Here’s a page that can help you figure it all out and you can pick and choose which one’s you’d like to use.

Yeah I just added to the point. Of course there I no stopping you from getting 0/0 each level, even with vanilla WK. That’s more to do with your lessons pace.

Before I was leveling up in 7-10 days altogether.

Before I was leveling up in 7-10 days.
reference

Honestly, I am more annoyed with having all the kanji but the one I need on Guru, and then having to wait two days to level up because of a typo.

I see that people have different opinions. Some may want to level up fast, then focus on other areas later.

However, I wish that WaniKani provides optional native features, if the team aren’t somewhat concerning about them. Making optional vocabulary bar should be an easy one. (So far, I only saw Ordering by Level, and Extra Study.)

UserScripts are quite hacky by nature (editing the website by generated HTML?), and now already counting their days to demise. 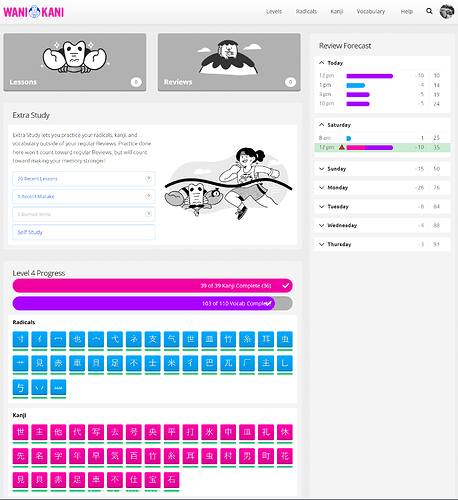 My method is working! It’s so satisfying seeing that Lesson box all greyed out!
I timed it so that tomorrow when I do the review for the four remaining kanji it will unlock the last 7 vocab for this level and then I’ll level up! I’ll be a little sad that I won’t be able to see the vocab bar hit 100%, but at least I got to see it climb up really high before I leveled up!