After a day of fiddling with Javascript (I knew absolutely nothing before attempting this), I managed to customize my progress bar to what I want to see! 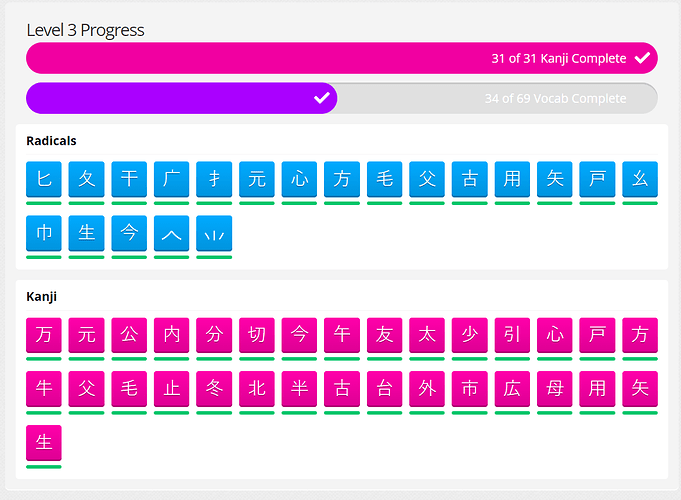 I’m not a fan of WaniKani progressing me to the next level before I’ve completed all the vocab. To me vocab is the reward after learning all the kanji for each level. So I installed True Level which doesn’t level me up until I’ve completed all the vocab, and used Reorder Omega to not show the next levels lessons in my current lesson. There’s just something about having my lessons skyrocket after a level-up that isn’t satisfying to me; I want that lesson number to hit zero first. The only issue with all this is that it’s hard to tell just how much vocab I have left, and have it be satisfying to complete it. So I messed around with Gorbit99’s “Better Progress Bar” and was able to change it up (while learning a fair bit of Javascript) to show all the Kanji (not just the amount needed to level up), and all the vocab!

I feel accomplished, now to study!

Some of you have asked that I share the code, so here it is! It’s not the cleanest, but it works! (for me at least… let me know if it doesn’t work for you hahaha)

I feel accomplished, now to study!

And good luck with your studies!

Good for you! Personally I’d be too impatient to ever use this, but it’s cool that it exists.

Is there no way to install this ourselves? I would like this too.

That’s an awesome idea. I know theres reordering so people can just blast through the levels without learning vocab, so it can be hard to trust some people who are 60 but have like 2000+ lessons of vocab waiting for them.

Yes, OP should publish it

Ummmm hahaha I totally would but then you’d see how inefficient and gross my code is XD
There’s a fair bit of redundancy that an experienced Javascript coder could eliminate.
I wouldn’t mind handing it off to you, Kumirei, to clean it up though. I also have to give a lot of credit to Gorbit99 since it’s based off his script.

There is nothing to be ashamed of, I learned to program exactly the same way

The first script I made barely worked, but I still published it. As long as it works it doesn’t matter what the code is like.

Alright! I posted it! Have at it!

i also like to leave as few vocab as poss before levelling up.

Thanks for using it!

I just posted an update to the script that loads the HTML/CSS first and then grabs the data from Open Framework. That way there’s not as much visual lag.