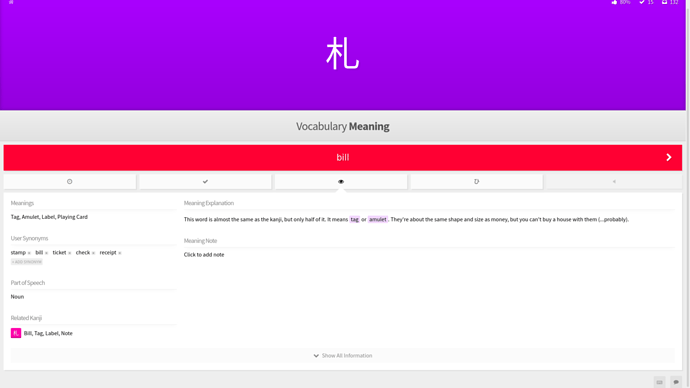 It’s probably blacklisted by the staff, which supersedes user synonyms. It’s not correct, by the way - it only ever means that as a suffix, not as a word on its own.

Yeah, ふだ doesn’t mean bill, so they appear to have blacklisted it from being used as a synonym.

I feel like the system should give a warning when a user has a blacklisted word as a synonym. @Mods (? not sure it that’s the right people to tag for suggestions, if not, sorry)

Hi there! We are the right people to tag. I’ll have the team take a look at this suggestion, thank you

Hi @Naphthalene circling back on this, I don’t think it’s the fact that “bill” is on the blocklist/blacklist for this item (it’s not). Rather, I think it’s an issue with your user synonym being accepted. I’ll have engineering take a look into that part.

We have had requests for a warning/indication when a user synonym shows up on the blocklist. Luckily, we’ve found that the two lists don’t overlap very much, so it’s not at the top of the priority list right now. That said, if you have any other examples that suggest otherwise, we’d love to hear them!

Has anyone else run into this sort of thing?

I have “front” as a user synonym for the kanji 表, but “front” got marked incorrect in a review

According to the internal WaniKani API, the kanji 表 has an auxiliary meaning “Front” of type “warn” with the message “Oops, we want the kanji meaning, not the vocabulary meaning”. Therefore, the intended behavior is that WaniKani should reject your input of “front” with a shake and the warning message, regardless of your user synonyms. However, a bug causes WaniKani to instead mark you wrong in case you have “front” added as a user synonym.

If you remove “front” from your user synonyms, it should return to the behavior of giving a warning instead of outright marking it wrong. Not a great solution, but at least better than failing the item.

More details about this bug are in this post:

It seems that the result from the public API is missing the auxiliary_meanings:

@Mods, is this bug still being worked on? Or is there a problem replicating this issue? I just tested it in an extra study session and still encountered the problem.

It’s on our list of bugs, but we just have some other higher priority tickets so it hasn’t been fully worked on yet although there is a proposed solution already. Sorry!