Anyone else get frustrated with radicals sometimes?

I wish with radicals, there would be that “uh-oh” shake like when you type the onyomi instead of the vocab pronunciation.

Sometimes, I’ll type the actual meaning (e.g. “10” instead of “cross”, “one” instead of “ground”), or a similar meaning (say vs speak) and get my radical sent all the way back to Apprentice or Guru. When I haven’t seen it in a couple weeks, I sometimes have to ask myself “Wait, does that one use the actual meaning or a mneumonic?” I’ve found myself searching the mnemonic list

Not arguing against the use of mneumonics, in general they’re useful. Just wish they’d implement those little checks with radicals too. 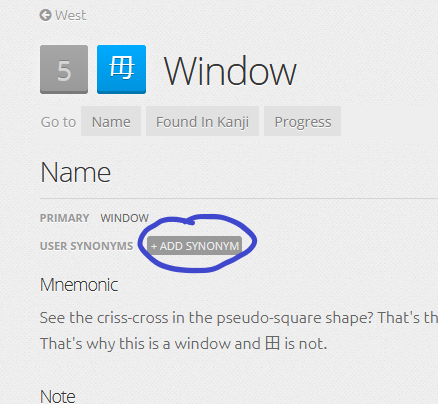 Mnemonic. It relates to the memory, not to the lungs.

I was thinking of pneumatic.

Absolutely. The best solution is to get one of those “ignore answers” scripts. Then, after erasing the mistake, add whatever you put in as a synonym.

Of course it would also help a lot if we could just add user synonyms during lessons.

You’re free to add your own user synonym

That’s still not going to erase the mistake. It just sucks, especially if the item is enlightened.

Of course it would also help a lot if we could just add user synonyms during lessons.

There’s a script for that.

That’s still not going to erase the mistake.

Not for previous ones, no, but it’ll do the trick for any future ones. Installing the ignore script won’t fix past mistakes either.

Personally, I always undo mistakes on radicals, even if I genuinely forgot, I don’t think it’s worth my time because when I learn a kanji they show me the radical again anyway, plus, the goal is to not have to break down kanji into radicals when I’m reading, so it works out for me. It may sound a bit risky but I really have no issue with kanji doing this.

Everyone’s different but I just don’t care to keep radicals in my review pile, thinking they’re important enough to come back. I just get them burnt asap.

For me, the radicals help for the initial learning of the kanji, but for the most part, I don’t use them. I just use the undo-mistake script.

I’m much more strict about Kanji meanings, and even more strict then for the vocabulary meanings and readings.

I go back and really drill the mnemonics and constituent radicals if I have a leech that I can’t seem to get rid of. But all in all, I spend little time worrying about if I have radical names memorized exactly.

There’s a script for that.

Really? Would you mind giving me a link for that script? I’ve been looking for one for a while.

Not for previous ones, no, but it’ll do the trick for any future ones. Installing the ignore script won’t fix past mistakes either.

Well, past mistakes are past mistakes. I don’t think you’ll find a script for that one (but go ahead and surprise me again).

The ignore script will fix present mistakes, and those are the most infuriating ones. But like I said, using both the ignore script and user synonyms in combination is probably the best solution here.

Really? Would you mind giving me a link for that script? I’ve been looking for one for a while.

thanks! i had no idea.

also whoops, went back and corrected it

I’mma be honest with you, I never cared about the radicals and always used the redo script when I got one wrong. Who needs these things anyway?! They are not part of the Japanese language!

I also did the same thing with the kanji and vocab, to be frank. I just don’t see the point in punishing myself for not knowing things I don’t know, you know

I’m another who doesn’t bother with the radicals but i don’t use a script, i just do them all togethern in one lot. when they come up, i open the radicals list in another browser and copy the answers over. As far as i am concerned, if i have looked at them at least 5 times, i have learned them enough. I can recognise that component in kanji when it comes up but i don’t need to know it as wolverine, etc.

started using the undo script, wish i knew about it sooner

i have the same mentality. especially the ones i know the meaning of, but am forced to use the made up one.

Don’t even get me started. They push these grandiose ideals with little consideration of the consequences and a very narrow understanding of how the world is. Unable to see things other than black or white. Its frustrating because its very difficult to pull them away when they’re on the high of a grand conspiracy that everyone is working against their ambitions.

But yeah the kanji kind can be frustrating too, especially considering you don’t actually NEED to burn them, they’re just kind of useless by the time they get to master IMO.

To the topic title.

no, I always mark them correct even if I dont remember them. (I use anki mode script in reviews)

Radicals are relative to your learning tool.

You dont need its reading/meaning like you need for kanji/vocab here. As soon as you move to another japanese language method, or study, you will see completely different readings and meanings for them.

That’s why I dont care

I even showed readings for them to a japanese coworker once and she laughed because she would never ever associate what WK does to them, and when she told me how she learned them, for me it was absolutely different as well.