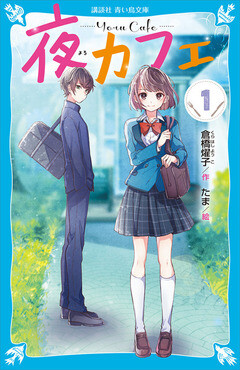 We are reading the first volume of 夜カフェ as the Beginner Book Club!.
This thread is for chapter related discussion. We are reading together from the aforementioned date on, but this thread will be kept open mu~ch longer (like 10 years longer). So don’t be shy to ask questions even if you are late to the party

Feel free to add any words you looked up as well! Page numbers may be off by one or two because of differences between physical and digital editions, but we try to keep the words roughly in order of appearance

Guidelines When to add an entry If you are reasonably confident of the word itself and the appropriate meanings or translation within the context, go for it! Please don't add words if you are unsure; this can cause a lot of confusion for others. If...

The book is also available over at koohi.cafe (formerly known as floflo).

Bruh. I loved this week!
The amount of new vocabulary was a bit more than the last weeks. Especially the sewing part in the beginning was basically a sewing tutorial ^^.
The amount of onomatopea this week was also especially high.
But the sentences somehow flowed so well this week and the development was fast, gripping and interesting.

I mean the development with Yamato was basically hinted at already in the adhesive plaster scene so I wasn’t surprised. The dude seems to be everywhere though XD.

By far my favourite chapter so far. Let’s see if the Tina situation was a misunderstanding somehow. I sincerely hope so.

EDIT: I blurred anything that could be too revealing. Although If you ask me I wrote nothing spoilery. Probably a better word would have been “adhesive bandage” or “sticking plaster” I somehow mixed them both together -.-.

Ha, I’d never heard the term “adhesive plaster” to refer to a band-aid/bandage before. Today I learned.

P.S. Might want to spoiler tag for safety; nothing was too revealing, but better safe than sorry, I think?

Must be a British term or something, eh? And not one that actually made it to Canada (or, if it has, I have yet to hear it!).

I’ve never heard the term “bandaid” used here in the UK (many people will recognise it from media though), and although “bandage” is sometimes used, “plaster” is by far the most common term.

The amount of new vocabulary was a bit more than the last weeks. Especially the sewing part in the beginning was basically a sewing tutorial ^^.

Exactly how I felt when I first read it. The description seemed endless that I had half a mind to skip it.

…but pushed through it in the end for the purpose of learning new vocab. (I’m sure I forgot the meaning to all of them already though haha.)

I do like that Yamato was there to push Hanabi’s growth further and that their misunderstandings cleared up. I sense in the coming chapters, the issues between Hanabi and Tina will be clarified too.

I have a few questions, some of which seem very basic, but might as well lol:

Once again, thanks in advance for any answers!

Edit: Sorry, this message replying to @Hantsuki is a mistake on my part lol

I assume it’s a cultural thing for Americans to refer to a thing by the company name vs the product name, such as Xerox instead of copy machine. Do you all do that in other countries too?

I can’t think of any items commonly referred to by a brand name (which I believe is called “Metonymy”) in the UK so I don’t think it’s much of a thing here. But I’ve actually had a similar discussion with a friend from the Middle East before, and he mentioned that it’s actually a pretty common thing there. Unfortunately I can’t remember anything other than tissues commonly called “Kleenex” there.

“Hoover” for vacuum is one I’ve heard from over there (meaning UK, not Middle East), but I dunno how widespread that is.

I can also say that Canadians do it basically in every instance Americans do, but we take a lot of pages from the USA’s book quite often, and I doubt if most Americans even really see Canada as all that foreign.

Just want to mention I’m not looking at my book as I answer so the meanings are based on the context you provided.

Conjugate a verb into short past tense and change た to たら to suggest “if something happened.” In the context of the sentence: “If you listened/asked Aiko-san…”.

怒ってる is formally written as 起こっている。It’s just shortened to 怒ってる in casual speech. It’s infinitive form is 怒る which yes, is a う verb. Meaning is also correct. You can ask if someone is angry by adding a question mark at the end. 「怒ってる？」

This one is a little hard for me to explain because it’s not directly translatable in English (it doesn’t sound natural anyway). But the きた technically means “come back.” In a more useful example, 「家に帰ってきた」vs 「家に帰りました」。The former clarifies that the person came back home and is home while the latter means the person returned home at some point but more info is necessary to deem if the person is still home.

「パパは帰ったの？」Did Papa come home?
「うん、昨日帰ったけど、朝早くまた出かけた。」Yes, he returned yesterday but left again early this morning.
or 「うん、もう帰ってきたよ。」Yes, he already came back.

な is a casual speaking marker which can suggest “right?” “don’t you think?” It’s a speech filler in a way that expresses the speaker wondering about something. “I guess/ I think (he/Yamato?) must be angry huh…” or more natural English: “I get the feeling he’s angry… why wouldn’t he be? / he must be huh…”

If I remember correctly, this was connected to the previous sentence, and the と before it is the connecting point that precedes this sentence. So to translate both parts together: “When I think about if he’s (still) angry, my chest (starts) hurting.”

There’s some parts that aren’t necessary to translate into English and a couple words I included for better flow, but that is the just of the meaning. Even if it doesn’t translate directly, you should understand that Hanabi is concerned about Yamato being upset with her. She thinks he is and that also upsets her.

I assume it’s a cultural thing for Americans to refer to a thing by the company name vs the product name, such as Xerox instead of copy machine. Do you all do that in other countries too?

Hmmm, in Germany we sometimes refer to a thing by the name the company gave it (like Kleenex, for example, but also German names like Tempo (instead of Taschentuch for a paper hankie), Styropor (for styrofoam) and so on), but I’m hard pressed to think about a thing that we refer to by the name of the company itself (maybe Moulinex for a blender?). But often the well-known brands produce a wide variety of things and so it’s usually hard to identify a particular product with the company name.

The てきた has a bunch more meanings that what Hantsuki provided; it’s this grammar point: https://jlptsensei.com/learn-japanese-grammar/てくる-te-kuru-てきます-te-kimasu-meaning/
For the example at hand, it probably means something like “started to answer” if that makes sense in context? (Literally: “answered from now, going forward”)

But the きた technically means “come back.” In a more useful example, 「家に帰ってきた」vs 「家に帰りました」。The former clarifies that the person came back

Actually the “come back” meaning only applies if the verb before it is a different action, e.g. 行ってきた (went and returned, that’s what 行ってきます comes from by the way) or 買ってきた (went out to buy and returned). In your example, it’s more like “move toward the speaker” so 帰ってきた implies that the speaker was at the place that the other person returned to.

In 「胸が痛くなる」 “itai” is converted into an adverb because that’s how “naru” works right?

Technically this has not so much to do with なる but rather with how adjectives can be made to connect to verbs (namely by turning them into an adverb). なる is just a verb meaning “to turn into by itself; to become”. It’s basically the counterpart to する where する describes an action by somebody and なる describes something that happened by itself. Both have lots and lots of usages as auxiliary verbs which sometimes blurs their true identity somewhat. In this case the literal translation is “it becomes so that my chest is hurting” which we usually translate as “my chest starts hurting”.

How can we break down 「なんだか、ひとつ知恵がついたみたいでうれしくなる」

I can’t tell you the exact meaning here because I don’t read along, but a general breakdown would be

Maybe something like "It seems like [somebody] applied some wisdom and I became happy / which makes me happy " or so?

A bit sad as I was out hiking last week without any internet so I marked everything on my kindle I didn’t understand and then it started acting strange and after restarting it had deleted all my highlights for chapter 5 : (

I did start chapter 6 on my way home yesterday so I’ve at least got a few questions already.

I’m not sure how to interpret the first section ハサミから伝わる
And I don’t think I understand what the last part means either: ザクザクとした感触は、随分久しぶりだ

Then later on 「裁縫、出来るんだ… 。」 is this ヤマト君 saying that? And if so what does he mean by it? I understand the sentence but not in the context of what’s going on.

Then later on 「裁縫、出来るんだ… 。」 is this ヤマト君 saying that? And if so what does he mean by it?

That’s what I understood. He had been watching her, so then he remarks, “So you can sew”. It’s something he didn’t know about her, and it probably impressed him.

Yes its a saying (I like 慣用句 such a cool word). It’s used when one doesn’t know how to react and describes averting ones eyes in the direction of the sky and looking aimlessly around.
It can even be deduced a bit since literally it says “letting one’s eyes swim in the air”

Man, this chapter was rough for poor Hanabi, but what else is new, I guess. At least we briefly got a super cute & happy Hanabi illustration that almost makes me wish this was a manga! And she suddenly got much closer to Yamato-kun. Apart from that though, in my head, this here feels like an appropriate soundtrack for the chapter (or the whole book so far…), if just for the chorus: 【meiyo】なにやってもうまくいかない【MV】 - YouTube…

Man that is a banger

“Hoover” for vacuum is one I’ve heard from over there (meaning UK, not Middle East)

Hah, yep. “Hoover” is what we call vacuums.

Sorry if this is somewhere behind spoiler tags above (I suspect they cover bits later in the chapter).

I’m confused on p68 about the 注意事項.

It seems to be that she needs to soak it in detergent or soap, then wash with hot water. But then it says water will make it worse (not sure of the translation of this - make is sink in would be my best approximation). It is just saying, don’t use cold water?”

Also just a prediction on my part, having seen the image a few pages later. I’m wondering if she’s going to all this effort to later discover Tina threw the bag away herself because she doesn’t like gym…or something like that.