I might be miles out here, my Japanese grammar is awful, so don’t trust this at all, but I think…
ん - explanation particle
だ - declarative (similar to, but not the same as, the polite marker です)
よ - “you know” sentence ending particle

って - not sure about this… is this the informal quotation particle?

な - between な-adjectives and the の particle, you have to put な. Is that right?

Ah, yes, now that makes much more sense! Thank you!

分かった! Thank you so much!

Thanks. And thanks to @Belthazar too. I managed to get the gist! Woop!

Also, thanks @marcusp for sticking around for this one, I’ve already learnt new things from seeing you break stuff down. I managed to get the gist of those sentences by myself and felt reasonably sure I had them right (so I didn’t ask), but now I feel like I understand them.

Lot’s of useful advice for learners on this thread already. Thanks everyone! I’ve been a bit put off by the baby language, especially with an unfamiliar word like びっくり. But the vocab sheet has been really helpful - thanks to whoever has contributed to this. And thanks to @Viridithon I got the book when it was free on bookwalker a few weeks ago!

Here was my translation for chapter 1 - probably with plenty of errors!

ママどこかしってう？
(ママどこかしている？)
Mama I know you’re somewhere?
“Mama where know”, or in better English “Do you know where mama is?”, as if Chi asked the dog. (Thanks @Toyger)

ころんでも自分で起きるんだよ
If you fall down get up by yourself!

Micki! So great that you are here too! This is starting to feel just like the good old days!
(Not actually all that long ago, it just feels like it!)
Thank you so much for your translation!

I read this as “Mama where know”, or in better English “Do you know where mama is?”, as if Chi asked the dog =)

Rest is exactly as I saw it =)

I think I can explain that one through the power of love friendship grammar. There are two questions:

For たがる, it does appear somewhat redundant, as たいみたい should be enough. That being said, the issue is IMHO that in English, when we say “looks like” or “shows signs of”, there’s an implied deduction/judgement on the part of the speaker: it implies that we’re not sure. However, I am not convinced that the same applies to たがる, in Japanese, to the same extent. Even if you’re quite sure the person wants it, because, e.g., they just said so a minute ago, you could still use たがる instead of たい. In other words, while it is indirect, the level of doubt thus expressed is rather weak, I think. In fact, a straight unqualified たがる would often translate “someone wants”.

Regarding どうやら, it’s a bit of the same and a bit different. First, you’re right that it’s non-essential; it’s like adding “somehow” before “looks like” in English. Beyond that, in Japanese, I think it is commonly accepted that adverbs and the likes cannot alone convey possibility, certainty, etc. The textbook example is もし: you can’t form a correct “if” sentence with just もし; it needs a conditional such as ば or something. You have the same thing with たとえ, which calls for ても or somesuch to express concession. The point is that the adverb usually comes first and announces the conjugation, so they act as a pair of delimiters, if you will. It’s actually pretty helpful for reading as you can presuppose the mood of the clause you’re reading before even reaching the verb at the end. They also help disambiguate between different senses of the same conjugation, sometimes.

So, if you put it all together, たがる externalises the feelings as a visible state, adding indirectness but still expressing desire rather straightforwardly. みたい explicitly reframes the sentence as an uncertain judgement from the speaker. And どうやら co-occurs at the beginning of the sentence to signal the correct modality ahead of time.

Is it just me or is seeing some of the kanji and furigana using https://read.amazon.co.jp/manga really difficult?

I believe it’s “What’s this?” and the reply is, “milk used for kittens”.

Is it just me or is seeing some of the kanji and furigana using https://read.amazon.co.jp/manga really difficult?

I have the eBook via Rakuten Kobo, which is likely the same images as you’re seeing. It’s definitely what I’d consider too small of a resolution. It’s probably a product of the source material being from 2004.

For those reading paperback, here’s what we e-readers see: 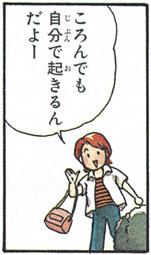 I’ve seen worse (especially for ebooks of 1990’s manga), but it can still be difficult at times reading the furigana in チーズ. So far it’s been kanji I already know the reading of, so it hasn’t been too difficult.

Edit: One more example (showing a more difficult one, with the furigana on 気持ち):

Edit 2: This isn’t meant to be a complaint of the book on my part, by the way. But, rather, if we e-book readers have any question on what seems like a clear-to-see kanji, please be understanding =) 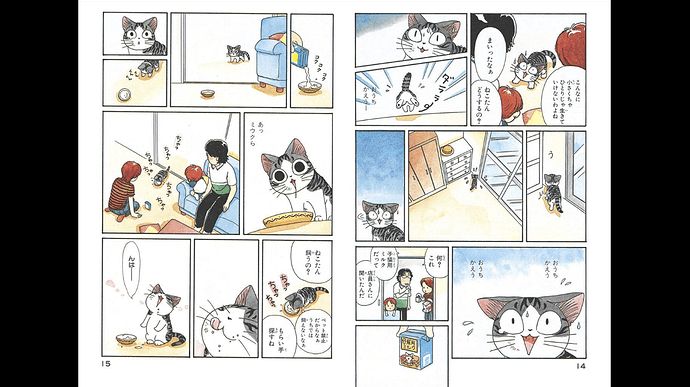 Here’s what I’m looking at.

That’s about 75% the size I’m getting. Can you zoom in? I’ve never bought e-manga via Amazon, so I’m not familiar with their reader. Do you have a tablet or smartphone you can view it on to see how zooming works out there?

It trolls me when I zoom in. I begin to zoom in and a second later it zooms back to normal, however it gets blurred with each zoom, haha. I don’t own anything other than my laptop, so those options wouldn’t work out. Best I could do is take pictures and use image viewers to zoom in and enhance. A pain, but , it’s worth it. It’s only for volume 1, anyway. I’ll get the real deal later on.

It trolls me when I zoom in. I begin to zoom in and a second later it zooms back to normal, however it gets blurred with each zoom

(Keeping in mind I do not know your computer software proficiency), this sounds like you may be using your web browser’s built-in zoom, rather than Amazon’s built-in zoom function (if there is one).

The browser’s built-in zoom function (which you do not want to use) can probably be invoked by Ctrl+[mouse scroll wheel up], or Ctrl+[plus key]. (Not certain about on a Mac keyboard.)

Typically, an image viewer (emanga pages are just image files, after all) allows zooming in by using a [mouse scroll wheel up] with the mouse hovering over the image.

If you are using Amazon’s built-in zoom function, and it still causes issues, you can also try with another web browser (if you are able to install one). Firefox and Chrome are two common decent web browsers that can be installed and run on a variety of operating systems, so they’re easy recommendations.

Wow, thanks for the detailed explanation. I appreciate this mini grammar class

I’m quite computer literate. I am using my browsers zoom. This manga reader from Amazon doesn’t have one (that I can locate). I have Chrome, although I never use it. I’ll check it out and see what happens.

This manga reader from Amazon doesn’t have one (that I can locate).

I just signed up for Amazon.com and bought a cheap manga so I could test this. As you say, there’s no (that I can find, either) zoom function. But it appears to zoom to fit your window. Try to unmaximize the window, then resize it larger than your monitor. That will cause the image to resize large enough to read.

I realize this is not a sufficient way to view the manga (unless you’re on a Linux system with a window manager that lets you move a window with Alt+[mouse click]). But I figured I’d toss it out as something to try.

Edit: Alternative for Firefox, press Ctrl+[i] for the Page Info window, then click on the Media tab. Look for files with an address starting with “data:” and you can view the pages full size. But they may not be sorted in order. Again, not a real solution, but throwing out possibilities.