Wow, absolutely no reaction to Yanda coming in the house :o That’s when you know it’s bad.

No, there was definitely a reaction, albeit rather brief. 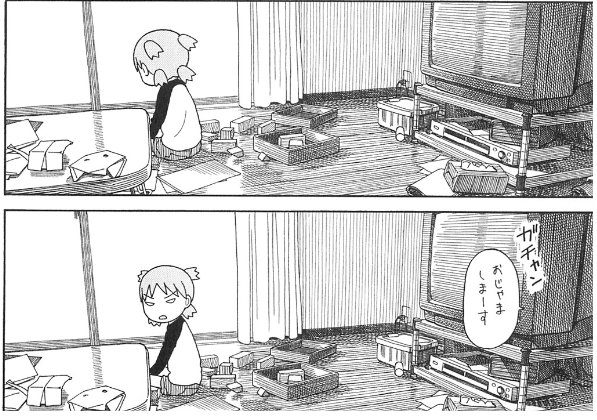 I also wasted some time Googling that. I knew that somehow she was meaning しゅじゅつ, yet couldn’t make the connection that しゅづつ was just her mispronouncing it.

I love Yotuba’s blank face. Especially when she’s sitting/lying under the desk.

Gives it a perfect balance of feeling sad for her and laughing at the same time.

Yay, I’m all caught up!
The last few chapters was so fun I couldn’t stop

And wow, just a few more now and we are completely done! O_o 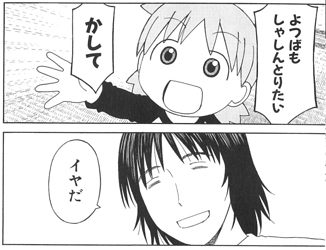 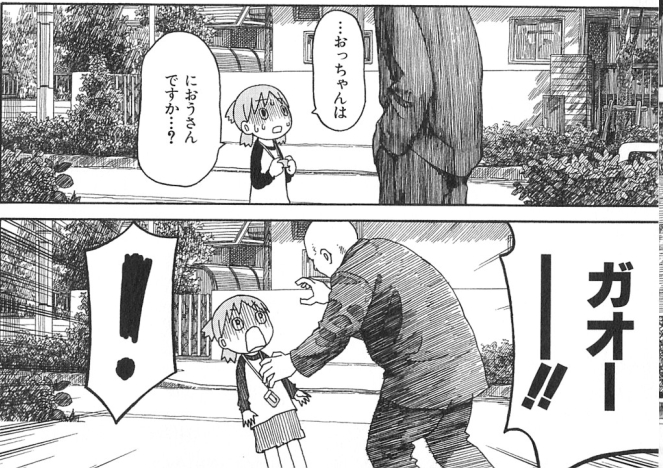 Oh, man. This chapter is so cute.

“I’m about to end this girl’s whole career.” 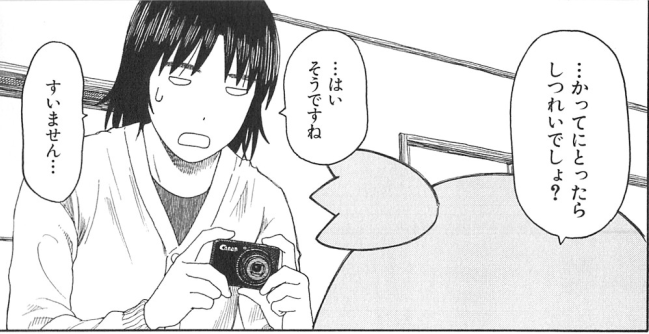 So, we just read this chapter in the other live-reading club, and I’m vaguely wondering if maybe it’s a misreading of うま? Maybe? Not sure…

So the staff are wondering where on earth Yotsuba has sprung up from, and she says:

I walked here, my house is just over there, a short distance away

I have a bunch of questions! Why is “over there” the object, marked by を? Is the いった the past of 行く or something else? I get the sentence, I just don’t have a feel for the grammar. Any pointers much appreciated!

That is an excellent question. I’m also not 100% on this answer but here is my take.

I expect it is 行く like you wrote. Concerning the を this one is a bit different than you assume. Movement verbs (wich iku is one of) can take the を particle to describe a medium or place through which the movement is performed.

These verbs are all intransitive. It’s not like you are swimming the ocean (whatever that would look like o_O). But it describes the medium/place in which you are performing the movement. In english you would probably say “swimming in/through the ocean”

I hope this explanation helps. I don’t have a nice summary link for further reading on this topic at the moment sorry. Maybe somone else can chime in.

Movement verbs (wich iku is one of) can take the を particle to describe a medium or place through which the movement is performed.

Another question if I may!

So, today we were going to Ena’s house, but on the way…

ちょっととおまわりしてー - we made a little detour

そっちまでいかなかった！ - to that place we did not go!

As you can see, I start off okay, but soon lose it! What happened? What is this story that Yotsuba is telling? Any help much appreciated, again! Thank you!

She’s not allowed to cross the big road (i.e. go over to the other side) without adult supervision.

Wow, I would never have got that in a million years! Mind you, I still can’t see it! Studying Japanese is like those crazy pictures made up of squiggles, I could never see those either. Thank you @Belthazar !

Why is “over there” the object, marked by を?

I would never have got that in a million years! Mind you, I still can’t see it!

Now that you’re aware of it, you may start to see things like っちゃだめ from time to time.

It’s more difficult to recognize at first when there’s no hiragana, but 〜ちゃだめ is used often to say it’s bad to do the action of a verb.

ってはだめ = essentially, “to go is bad”

And if doing something is bad, that means it is something you should not or must not do.

This is one of those cases where the common English way of wording something (“You can’t go”, a prohibition of doing an action) is different from the Japanese (“To go is bad”, categorizing an action as “bad”).

The Japanese way doesn’t outright say you shouldn’t or can’t do something, but it indirectly implies it by telling you it’s bad.

TaeKim has a page on this for further reading.

Other examples of this include:

I’m amazed, mind-blown, and so grateful! Thank you Christopher. I’m busy writing this all down and looking up all the other examples from the other volumes and making notes. You are too kind, and just amazing. I have no idea how you do it, but I am so grateful. Thank you!

Me again, back to volume 11, sorry. But no questions this morning, you’ll be relived to hear,… I worked it out by writing it out!

Yotsuba has explained to dad that because he doesn’t want all the flyers that get delivered, they are hers. Then she adds:

But sometimes things are also delivered direct to me!

Dad replies with an へー!

Me again, back to volume 11

But no questions this morning

So the pizza delivery guy has arrived and has listed what they’ve ordered and wants to confirm it, so he says:

So your order matches that (what I’ve just said), right?

Took me ages to figure that out until I saw definition.3 of 以上: the aforementioned!

They’re in the park playing with a couple of bubble-blowers that Yanda has brought along, and now Yanda is looking in his bag. Janbo says:

Clearly he’s saying “what are you looking for? Do you have yet more stuff?”, but I do wonder what that あん is. Could someone kindly tell me? Thank you so much!