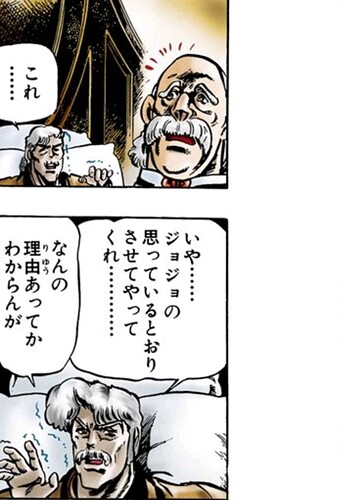 I’m by no means an expert, but some times characters use って as a speaking style. I know in Doctor Stone, Senku uses it a lot. So it might just be something like that.

It could just be a quirk, Araki is known for playing with the Japanese language a lot. You would probably have a better chance at seeing if Jonathan’s dad has spoken like that before, but either way, I think it’s just emphasis on the connection between how much he does not understand the reason why Jonathan would be doing what he’s doing. It reminds me of the だって or って type of speak that would replace the は in a casual sentence, like, “as for what reason you have, I have no idea but…” (but is added since the original text has a が）

I do not personally believe it changes the translation in a drastic way, and it would still be the same overall meaning if it had used あるか instead of あってか. Of course I could be wrong, but when it comes to Araki Japanese, he’s famous for his voice in his Japanese works for being a little off the regular path so

Your question gave me a kind of existential crisis trying to figure out what the purpose of ～て＋助詞 is, so my answer is going to be kind of disorganized due to it being in the order of research I did (I searched Google for grammar help in both English and Japanese). Here’s what I found out and keep in mind I’m not 100% sure in my conclusion though it seems logical:

I remembered that there are other times where ～て goes in front of a particle (ex: ～ても / even if ~、～ては / when ~) so I thought researching about the purpose of the ～て form might help.
～て connects two simple sentences into one sentence. The meaning isn’t as blatant as other grammar patterns (ex: ～ので or ～のに obviously give a reason) so you have to figure out why the two basic sentences are being connected.

So I guess with all that said,
なんの理由あってかわからんが = 何の理由（が）あってか分からないが…
I think the lower examples on this list seem to suit 「なんの理由あるか分からんが」 because it’s contrastive (there is a reason, though he does not know what it is). And signaling that contrast is what ～て is doing.

Edit: I forgot to say that I did find other examples of あって＋か (it seems to be a grammar pattern used in plain/casual speech, the sentence will end in a plain verb):
そんなわけあってか → そんなわけ（が）あってか（どうか分からないが） “Probably because of that”
そのせいもあってか “Probably/maybe because of that”