I started reading the Alice in Borderland manga and came across this: 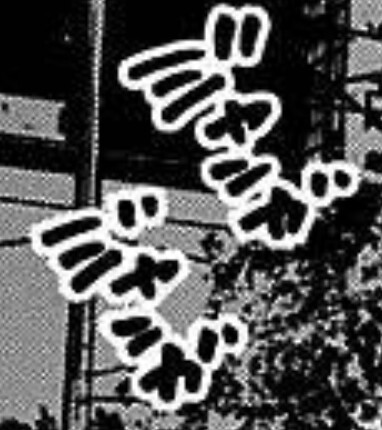 Why would there be dakuten on ミ? What sort of pronunciation would this indicate?

Isn’t it ジャンガ? The third character’s top line is shorter and tilts downward, similar to the lines in the シ, so I think it’s ン.

I CAN"T BELIEVE I MADE THE SAME MISTAKE AS OP

That said, you can sometimes find dakuten in weird places (I think I might have even seen one used on a ミ in the past). Wikipedia explains this as “In informal writing, dakuten is occasionally used on vowels to indicate a shocked or strangled articulation; for example, on あ゙ or ゔ. Dakuten can also be occasionally used with ん (ん゙) to indicate a guttural hum, growl, or similar sound.” (And yeah, this isn’t a vowel or an ん, but the idea is similar.)

I’ve seen it on a ま, I believe, I’ll try to find it
That being said @ChristopherFritz probably has a directory full of just these

probably has a directory full of just these