In my life, I’ve never been a motivated person. I always did what I felt like doing, and as little as I could get away with of things I “had to do”. This too was something I just felt like doing one day, for no particular reason. I mean, I like anime and manga and JRPGs, and one day some Hololive girl was streaming Duolingo and I thought it looked kinda fun. Also it was the pandemic and I didn’t feel like making bread. But somehow I stuck to this. Every single day, even when I didn’t feel like it, even on my birthday. I think making it routine was key in following through. And in so doing, I actually managed to build some good habits in other areas of my life as well.

I started with about a month of Duolingo, which was good for learning hiragana and katakana plus some basic sentence structures, and from the forums there I found out about Wanikani. After a while I got a tutor on italki for grammar and speaking practice, and I quit Duolingo since it was no longer adding much. Since then my schedule became around 2 hours of studying every day (Wanikani/Anki/Satori reader/various manga) and 2 hours a week of 1-on-1 lessons with my tutor. After about a year, I also started writing about a paragraph a week that my tutor gives me feedback on. At this stage, I would put my level at around low advanced or high intermediate.

As far as the road ahead goes, I plan to continue Wanikani until everything is burned, but I’m happy to be able to reduce my WK time in favour of more immersion. Of course, I will continue taking lessons, as well as mining sentences for my Anki decks.

Oh, if you’re like me you’re mostly here for some stats, so here you go: 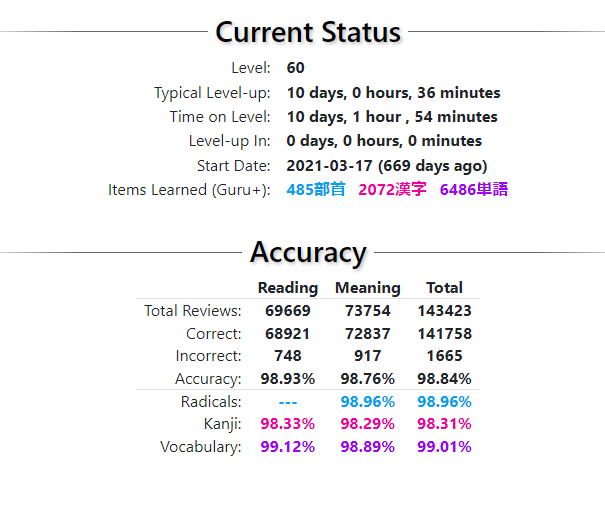 in so doing, I actually managed to build some good habits in other areas of my life as well

I love hearing this.

Awesome to hear it brought you other goods things besides learning Kanji. Big congrats!

Wow, that’s amazing! Your first paragraph almost reads like poetry. I’m someone who’s only ever put effort into things that were “expected” of me, and learning Japanese is one of the first things I’ve chosen to consistently put effort into just because I want to. It’s a different feeling for sure. And as a beginner, it’s incredibly motivating to see others achieve so much in their language journeys. Congratulations

1600 mistakes! What in the world? Had you studied kanji before? I get 1600 mistakes a month easily.

I started using the Anki mode user script after around level 30, so I no longer had typos and mistakes due to not remembering the exact English phrasing used for some words. I also didn’t want lessons to be delayed, so I would pass every item until Guru level and only then if I got it wrong would I fail it. Since mistakes mostly happen with young items, that probably artificially inflated my %.

Before this script my % was around 96% iirc. I guess my retention might have been higher than average because I did reviews every day. I also have a pretty good memory in general.

I also didn’t want lessons to be delayed, so I would pass every item until Guru level and only then if I got it wrong I would fail it.

I did that for a while too! Didn’t make sense to me to be stuck without having any lessons available when I was so eager to learn. And also it helped learning the kanji when I unlocked the vocab lessons and did them right away. (I don’t do it anymore, now I want less WK reviews so I slowed down and reorder to have the vocab first, and the new kanjis that level me up are last)

Hey eglepe, a big おめでとう on making it all the way to level 60! That is no small feat!

Every single day, even when I didn’t feel like it, even on my birthday. I think making it routine was key in following through. And in so doing, I actually managed to build some good habits in other areas of my life as well.

This is awesome! WaniKani did the same thing for me. Well it was two fold, it made my discipline to study other necessary aspects of the language stronger and helped me build a strong morning routine that I never thought I could achieve. So glad to hear WK did similar things for you too!

Don’t be a stranger!!

Nice, job. The stats do look really sketchy though. Anything above 95% sets the alarm off. Not impossible though if you did side study. And considering you took twice the amount of what I did during the reviews it’s not impossible either. I don’t know. Hope you got it without cheating yourself and get a bunch of leeches during immersion that will trip you up. Not really concerning me, just want people to succeed.

Keep it up, nice streak as well.

Congrats on such a big achievement. This is motivational. Thanks for sharing. How many lessons a day did you do on average every day? And for the Anki, is there a specific deck you’ve been using or is it all from sentence mining? Thank you!

When I started I had a lot more free time, so I would do multiple sessions a day, doing all reviews and all lessons available. Later on when I got more busy I would aim for 20 lessons a day, unless reviews took way too long or apprentice items were above 100. And a lot of days there were no lessons available at all, so my lessons graph looks a lot more sparse. Quick calculation puts me at an average of 13.59 lessons a day from start to finish.

Exactly the same way as I do it and I think some people would progress a lot faster with this method.

Congratulations! The accuracy is beyond impressive!