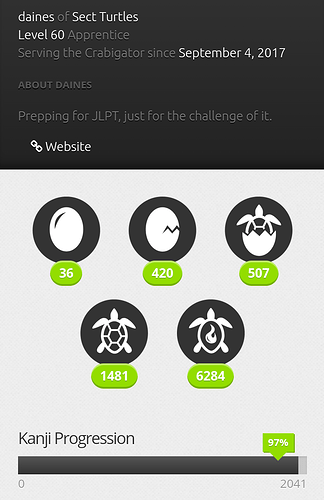 I signed up for WaniKani on 4 September 2017, so got to level 60 in 22 months, including a month in vacation mode. I started out pushing hard, and would level up in near maximum time, seven or eight days. My goal at that time was to be prepared for a three-week vacation in Japan. (It paid off, big time!) Upon return, it took about a week before I could really commit to restarting, and it was painful, of course. But that’s all just the SRS working for you. At that point, I realized I needed to slow down, so I migrated to doing no more than 8 lessons a day. This pace has really helped things stay more sane this past year.

I studied Japanese most intensively as an undergraduate, over 25 years ago. I learned a lot then, with a strong immersive approach based on Communicating in Japanese. I spent eight months living in Kyōto as part of a study abroad and did pretty well communicating about daily subjects and things historical (related to my studies and diving into 文語). But when I returned to the states, I didn’t have any time to keep up with Japanese so I forgot a LOT. Back then, I never got to the point where I read whole books, mostly just essays and short works as part of classwork.

Over the years since then, I’ve toyed with trying to rebuild my skills, but not had much luck. I tried a couple classes, but these were too remedial given how much I already knew. I also tried language exchange for a while, but those ended as students moved back to Japan. My most recent foray put me in DuoLingo, where I quickly worked through everything they had to offer at that time (right after they introduced it two years ago). That gave me confidence that most of my grammar was still there, but I knew that in order to read (something I wanted to be able to do), I needed to get kanji back in my brain. At that time, I knew maybe 150 kanji to read and write.

I’ve been happy with WaniKani. I use the mnemonics at least 80% of the time, and the regularity of the system has really solidified my abilities.

My Wall of Shame when I hit level sixty was 康 and 土地. The latter one is burned, so isn’t going to get any better, but shows that I tend to have more trouble with reading than meaning, clocking in at 76%. My most difficult kanji are those I learned about the same time but also have nearly identical meanings. I swear there are twenty words for “consent”, and another twenty that use the same kanji but have a different enough meaning for me to screw it up. I also have a weakness in non-standard readings and kun-yomi “oddities” (usually three or more syllable ones).

At level 60, I still have some unburned items from the lower levels:
Kanji:

My main complaint on mnemonics was on “names” that just didn’t have an association for me, like Mrs. Cho or Jourm. I never developed a mnemonic for ちょう. These were mostly few enough that I’d just do rote memorization. In some cases, I’d end up using words I knew, but this was always a bit tricky. There were some cases where I used an association with 長 to help remember pronunciation on this one. Another obvious pronunciation mnemonic for me was to use the Spanish word “oro” (gold) for “おろ”. I confuse the こく vs. かく words a lot.

I definitely reworked some of the radials for myself. I knew that 扌 was hand before coming to WaniKani, and the pre-“fingers” name was useless for me … so glad they changed that one, since the presence of that radical is nearly always something to do with using your hands to do something.

A few other radicals where a different meaning helps me:

It seem WaniKani avoids developing pronunciation hints aligned with the radicals, but this has been an obvious win for me. There were even a few I struggled with where it isn’t a “radical”, but the presence of another kanji helped me nail the pronunciation. One example I kept messing up was 帯 (Belt) versus 締 (Tighten), which was helped by learning 帝 (Sovereign). Suggestions for WaniKani: introduce 帝 (level 46) before 締 (level 27), and likewise for some other kanji like this (卑, 屯, 肖, 凡, 呉, 旦, 呆, 且, 丹, 召, 貞) … and identify that these are “Visually Similar Kanji”.

Lifetime membership … it helps take off the stress of feeling like you have to plow through to get your money’s worth.

Start using a J-J resource as soon as possible. I keep a tab of コトバンク open on my phone browser now, and try to reach for that instead of Jisho. It’s hard though, because all Japanese internet seems to suck hard with ads. I thought U.S. web sites were bad.

If you see a problem, drop a quick message to the team for them to improve it.

What I Plan to Do Now

I’m going to keep using WaniKani to finish burning things, and I may do piecemeal resurrections of words that I catch myself forgetting. I did this the other day, when I realized while reading that I’d misremembered 真似.

I will probably keep visiting the forums for a while, too. It’s a nervous tick at this point to check the forums when I don’t have any reviews left to do.

Books. I plan to keep up with reading and hopefully improve my reading speed. I’ve been reading along with the Intermediate club the last two books, but continuing for me depends on how much I’m interested in the book at hand. I’ve got a stack of books on the shelf waiting to be read, so those will likely get priority.

JLPT N2: I’m planning to try to take the JLPT in December 2019. I know that I’m woefully unprepared for it right now (too slow on practice tests, too many incorrect answers). To this end, I’m working through the 総まとめ books.

Articles and Essays. I’ve been thinking to push myself to pick a newspaper article regularly to work through. I’d love to have access to longer reads from magazines, but haven’t found a good source of interesting articles yet.

Listening. I really need to work on my listening comprehension.

YOU DID IT!!
Congratulations, and have some cake!

Congrats! One thing that helped me with

正直 - Level 6 … seriously, figuring out which pronunciation of 正 to use trips me up.

. But I do still regularly fill in ふしょう for 不正

I started a couple months later than you, and I’ve been moving at a slower pace, but I hope to get a golden badge before you’re done burning stuff!

So glad that you made it! We all need the inspiration from people like you.

Congratulations!!! And thank you for sharing your story. I always love hearing how other people experience and get through WaniKani. Good luck on your continuing road to fluency.

But I do still regularly fill in ふしょう for 不正

When I learned that word I was watching Orange is the new black, and somehow I’ve got this mnemonic now where I think about the injustice of what happens to Poussey.
Since it’s always only the second syllable that’s problematic I’ve nailed that nearly every time now. I just have to first shortly think about the meaning and it works.

Congratulations, I hope to join you soon!
I started a few months after you, so it seems we have a similar pace.

Good luck on the N2!

You just gave me war flashbacks.

Congratulations @daines! It was very cool to read your detailed description of your experience with Wanikani, mainly taking into consideration how many years you have with Japanese

Would you mind if I added you to this thread? It’s a compilation of level 60 threads. Yours is definitely worth for newbies to read

The Level 60 compilation - Learn from those that did it!

This thread is very simple: it kinda became a trend for Level 60s to make a thread announcing their arrival to level 60 and sharing their journey of using Wanikani and learning Japanese. So I think it’s time to start collecting these into just one solid post! In here, you’ll be able to find several posts of people that reached level 60, full of wisdom for you to conquer your WK/JP journey!

Would you mind if I added you to this thread?

Please do. It was probably coming across that thread some time ago that was the seed to me thinking of writing an experience report.