The example sentence for 万年筆 is:

万年筆を落とされましたよ。
You dropped your fountain pen.

Shouldn’t this sentence use が instead of を? I thought 落とされました was the passive form of 落とす. Or am I misreading it?

Shouldn’t this sentence use が instead of を? I thought 落とされました was the passive form of 落とす. Or am I misreading it?

I think they might’ve confused passive with causative, which would be 落させました or the passive + causative 落させられました which would probably fit here.

EDIT: Unless there is something I’m missing here…

It is, for all intents and purposes, a more polite version of とした. 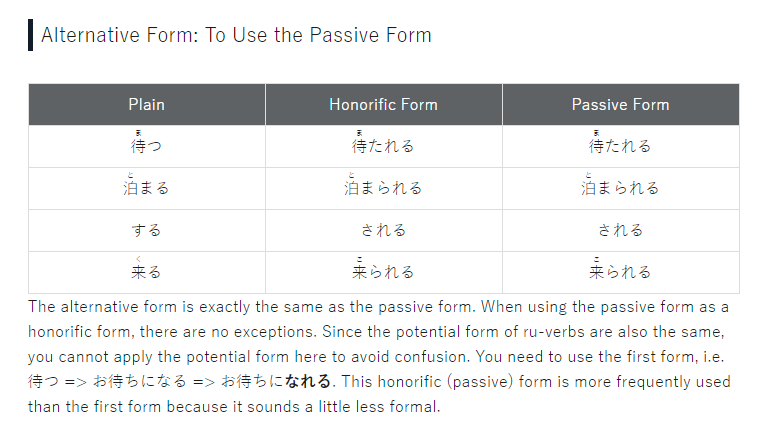 advanced grammar into the example sentences, but this is a kind of (honorific language) construction. It is identical in form to the passive conjugation though, which is confusing.

Ah, that would explain it

WaniKani actually does include quite some keigo sentences:

That one’s for 先程. It’s actually overly polite even, because 先ほど and いただく are spelled in full kanji.

WaniKani actually does include quite some keigo sentences:

That they do. They probably should have easier alternatives too though.

That they do. They probably should have easier alternatives too though.

I mean, in a way it’s fair game. The sentence is not wrong as you said. There are also plenty of sentences written in very casual Japanese, using gendered expressions. I’m usually more worried about the ones which use a taught word colloquially.

Thanks for the replies! I learned something new again and I suppose it makes sense that you would use polite language to someone who dropped their fountain pen

. I love it how Japanese has all these verb conjugations that are indistinguishable

It’s worth noting that honorific and passive aren’t the only meanings for ～られる. There’s also “spontaneous occurrence”.

The dictionary gives the example

性格が性格だから将来が案じられる
Because my personality is the way it is, I (spontaneously) get anxious about the future.

I don’t encounter that one often. I imagine it’s more common in literature.