Setting the wanikani forum to Japanese

Maybe many of you already knew it, but if you go to your account settings there’s the option to set the interface language to Japanese (that’s just for the community pages, not the regular wanikani pages).

It provides a little bit of extra immersion, but it’s not that much either so it is rather manageable for beginners of Japanese! 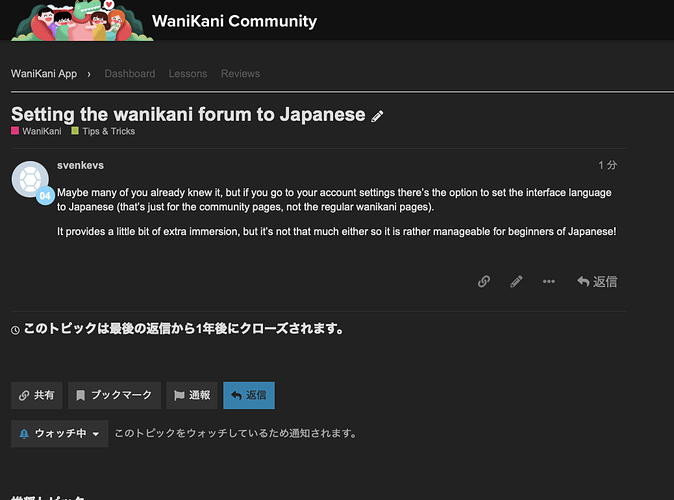 This is amazing! Having a Japanese Interface option on a language learning site is such a no brainer. Now I feel kinda dumb after not even thinking to try after all this time… Thanks for the tip!

Haha, I just ran into it by chance. I know that feeling of ‘why didn’t I think of it before’!

I think it works especially well on this forum because the software is designed with logo’s + text. You don’t have to know the Japanese for ‘reply’ (which is 返信 I guess?), as you also have an icon next to its which is typically used for replying to messages (also in other software). Posts/comments will still all be in English.

Normally I am not a big fan of such immersion options when I am a beginner in a language. But on this community site it just works really well as you can get around quite well on just the logos!

You don’t have to know the Japanese for

Not to say it can’t be useful, but this is one of the reasons it’s usually not. That is, changing an OS or similar to Japanese.

You just either remember the buttons you used to press, or figure out which buttons do what, and don’t really read them.

That’s also how people can use sites in other languages by just guessing.

Hope it works for you, and it is a nice immersion thing, it’s just better to have realistic expectations, maybe.

Yeah, I won’t learn much from it. It’s definitely not my expectation that this will make me fluent in forum software technical Japanese. And normally, like with an OS, I don’t like it as you can spend a lot of time searching for something you need at times, time better spend at normal language learning methods. So I agree with you there.

But on something basic (no offence) like the wanikani community site UI it doesn’t really hold you back, and it does get you a bit comfortable with certain things.

So far I learned to recognise a grand total of 1 new kanji because of it, the jellyfish for minute which I am repeatedly seeing in some context. So there’s some pay off for sure. And also how ‘like(s)’ can be translated into いいね！
As an absolute beginner, it’s also good to know that arabic numerals are used (things like wanikani/anki just teach the kanji for numbers, but don’t explain much about when they are used). It shows that ! is used, not solely the よ I just learned on Bunpro.

It doesn’t learn much new vocab/kanji I think, but it is still providing some immersion that doesn’t hurt. I would change the language for all software I use though (especially not OSs, the productivity software I depend on, etc.)

And also how ‘like(s)’ can be translated into いいね！

You see it a lot in Japanese social media, with people using “good” instead of “like” in their English translations.

I just did this myself, and it helps a bit. One thing interesting is the badge list. Instead of corny song references for using 100 likes, they just use standard Japanese words. One other badge that really caught my attention was 噂のリンク, a reputed link.

I imagine the badges take their text from the forum software provider and are localised for most languages they offer.