In 2020, I raced through Wanikani as fast as possible, reaching level 60, and then stopped after a year. However, I later realized that I had forgotten pretty much everything, so I resubscribed and attempted to start whittling down the pile of thousands of reviews I had accumulated.

This is the fifth thread documenting my challenge. You can read about my journey up to now in the previous four threads - Part 1, Part 2, Part 3, Part 4.

The journey so far

I started this challenge on May 12th, 2021 with a mountain of 6218 reviews. I naively thought that I’d mostly remember everything and that I could get through all that in just a few weeks, but instead I could barely remember anything from the higher levels, and it was brutal and my review count actually kept going up. After a month in a half, with my reviews up to 6618, I gave in and ended up resetting from level 60 down to level 46.

Even after resetting, it still wasn’t easy, and my review mountain reached a post-reset high of 5319 before it finally started going down again.

Even after my review count peaked, it was slow going for a while. This time last year, I was still struggling to keep my review count under 5000. However, as you can see, my review count has rapidly declined this year, particularly in the spring and summer. I am now down to only 1357 reviews, and it finally feels like I can see the light at the end of the tunnel. 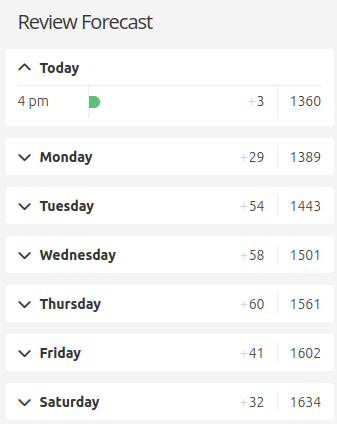 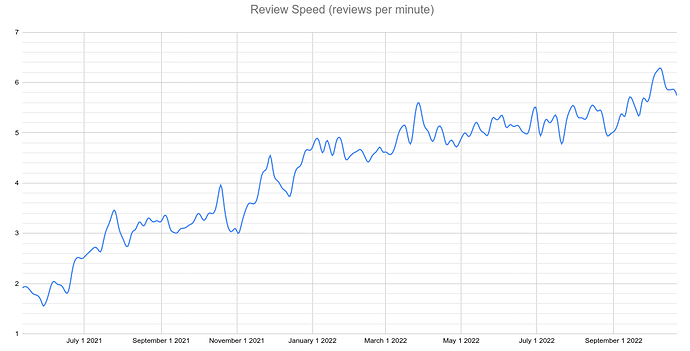 Of course, not everything has progressed so smoothly. My accuracy was of course terrible early on as well, and did go up a lot over time. However, after peaking around 83-85% this summer, it has now gone back down to 77% again. I suspect this is because I’ve burned so many of the easy items and a lot more of the remainder are leeches and unknown words. It’s still a bit frustrating though. 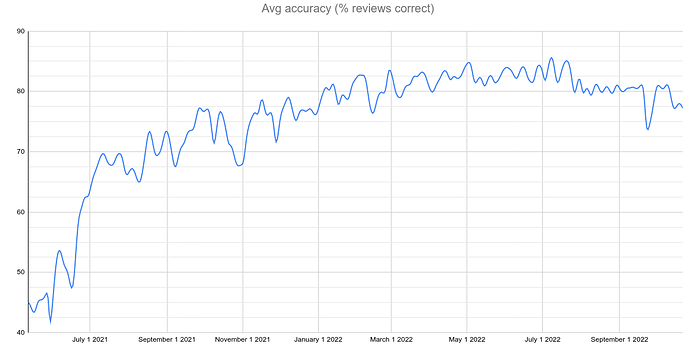 You can also see this effect in my counts of Apprentice, Guru, etc. over time. Recently, I’ve been burning tons of items, because a large fraction of the reviews coming up now are easy items that I previously got up to Enlightened and are finally coming up for burn reviews.

Your documentation of this process has been such an inspiration, I look forward to seeing you finally conquer that mountain

I only started reading about your journey a week ago but after absorbing all of the dense threads, your 決心 is stunning!
It’s like watching someone demolish an impenetrable building by throwing themselves into a wall over and over but then realising that somehow their impossbile seeming strategy is working!

I’m especially impressed by your speed, this morning it took me at least two hours to work through 60 reviews (and that included some radicals) I can’t imagine getting 6 kanji/vocab inputted per minute without dying from typos and finger cramps…

@Student-Bunny I think it might be because I’ve been doing Wanikani and studying Japanese for nearly three years now. I can answer most of the reviews just by instinct and still get decent accuracy. I’ve already seen every review many times in the past on Wanikani. If you’re just starting out, it’s natural that things will be a lot harder. You’ll get there eventually.

I’m kind of rushing it too, spending a lot of time per day on studying. My goal is to get lvl 60 in a year and so far everything goes quite smooth.

But how come you forgot almost everything after a year? Did you stop reading for a while after getting lvl 60?

Besides reading I think I will restart KW after I got lvl 60. Studying and doing reviews should take much less time then and I think it will be a good way to keep most things in my brain, bit not too sure if that’s the best way to go.

I figured that the new thread didn’t get off to a very exciting start due to me skipping Monday, so I decided to make it up to you by forcing myself to do double the usual number of reviews today.

I think that’s almost the lowest review count you’ve had?

In an interesting coincidence, the kanji 規 and 準 both came up in my last three reviews (out of 100) this morning (and I burned both).

Someone has probably asked this before, but have you ever looked at doing 2 review sessions per day, so 50 reviews twice a day? Or does that not work with your schedule?

Noticing a trend where you will have 1-2 days a week where you do a smaller # of reviews or skip them. Given that, I think it would be beneficial to do 2 sessions per day of about 60 items apiece (120 per day), which should take you about 10 minutes each. That way, even if you feel like doing a light day or need to skip a day, you’ll still be making forward progress with the number of upcoming reviews?

I sometimes do two sessions per day (for example last Wednesday), but usually I am too busy.

Sorry, too busy today. On the bright side, I finish making an awesome Halloween costume.