Currently reading:
ABBC: Prefectures book
IBC: Spy x Family
(I was reading 夜カフェ with the BBC at the start of the challenge but have finished that today)

With regards to the challenge, I’m going ok, but have kind of missed one day already. (I’m not sure if blankly staring at SpyxFamily in a sleep deprived state counts?)

Since I was having editing issues up to now, I’m just going to post my notes from the last 6 days!

Chapter I of note 3 complete, onto chapter 2!

And the main character turns his creepiness up by about 200%.

I am really inspired by the reports people are making on the things they’re reading. Maybe people have recommendations for things to read once I move up a bit from the よつばと・しろくまカフェ level? I expect I’ll be at this stage for a bit, but what did you start reading once you were a bit past the absolute beginner stage?

Cool, thanks! Yeah, Untitled Goose Game lets you change the language in the in-game settings, so I looked through all of Yakuza’s settings like three times trying to find it, but thanks to you and @natarin I could now! Yakuza’s gonna be one where if I replay it it’s gonna be in JP, so now I know how to do that when that time comes

I expect I’ll be at this stage for a bit, but what did you start reading once you were a bit past the absolute beginner stage?

You probably can’t go wrong with most of what was read in the Absolute Beginner and Beginner Book Clubs.

Working my way through レンタルおにいちゃん helped me build my grammar and readiness for things beyond absolute beginner.

Before that, I was reading some beginner-level manga, but was still struggling with it. This includes ふらいんぐうぃっち, 怪盗セイント・テール (which I read with the superpower of knowing it well from the English-subtitled anime and English manga releases), and 俺物語!! (which I was constantly referencing the English release for the first two volumes).

From yesterday, I finished

Today, I read TUGUMI a little (about 12 pages on mobile), but it seems harder than I think… Should I still continue reading this series (with the club)?

Also read 妖怪の子預かります, which I don’t feel overwhelmingly hard or un-understandable, but I did look up vocabularies every once in a while.

Yesterday I mentioned updating Bookwalker. I read some comments on the books as well; but at my level, if comments are too long, I probably won’t read (or like)…

I’m tired after work, but I read 17 pages of ピーチガール. Seems like the love triangle plot is taking center stage now and I can’t say I’m excited about that. Oh well.

I did it! It’s over! Summer Pockets Reflection Blue vanquished!

Congratulations!! That’s such a huge undertaking.

These are all great suggestions! I’ve been meaning to read ふらいんぐうぃっち in particular. I’m thinking I’d like to build myself a little library of physical manga to inspire me, so I guess it’s time to create an Amazon Japan account. Thanks for your input on this!

I am really inspired by the reports people are making on the things they’re reading. Maybe people have recommendations for things to read once I move up a bit from the よつばと・しろくまカフェ level? I expect I’ll be at this stage for a bit, but what did you start reading once you were a bit past the absolute beginner stage?

I mostly stuck to reading stuff I was already familiar with regardless of difficulty. My first manga was Haikyuu. A few months of reading that series, I joined the 氷菓 (Hyouka) book club. Then I decided to read the Sword Art Online light novels, even though I was told it is around the N2 level (or partly because of it even, 'cuz I wanted to git gud - lots of struggle and perseverance, but definitely worth it for me).

So my recommendation is “read something you’re interested in”. Joining a book club is also a good idea. If you’re going to read something you’re not familiar with, I’d at the very least advise against picking mysteries (like Hyouka) because the language barrier going on is quite puzzling already.

This is good advice; I do find myself rejecting some recommendations just because I can’t imagine being interested past the first few pages. I really wish there were a bookstore with a good Japanese section in my city so I could browse (I need to become a member of my Japanese cultural centre, which looks like it has a good library!)

If you don’t mind browsing things you’d have to import (if you want them physical), digital manga store sites such as BookWalker have a button marked 「試し読み」 on the book pages where you can often view the first chapter of a manga or novel. Some series have a very short preview (10 pages) and some have a long preview (50 pages).

Really enjoying the time tracking feature on Natively so far

As expected, my speed went up quite a bit after the first chapter of 告白, cruising altitude seems to be about 35 pages per hour. 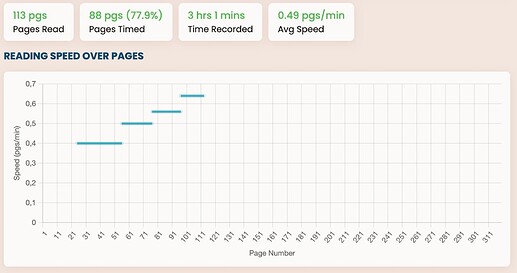 Chapter 80 of Yotsuba today. It was Halloween, so obviously Yotsuba was ridiculously adorable

I definitely have enough reading stamina to do that now, but I might have to save it for the weekend to have enough time!

@Daisoujou HUGE congrats on finishing Summer Pockets, what a great achievement! Would you recommend it as a first VN to read in Japanese? I’m hoping to start one in the near-ish future.

@MarnieDEB A few things that I would rate as a good step up from よつば from my experience are:

Great suggestions; thank you! I am making a list.

Starting off with a variety this week!

Think I’m going to stick to よつばと！ for the next two days and maybe try another of the ５分後に意外な結末 short stories at the weekend.

Starting to read 天気の図鑑. I already read a few stories at the start, but it has been a while, so I will restart.

Since there were quite a few, thank you so much to everyone for the congratulations! Feeling good about what I’ve done and very happy to have you all here supporting

It’s Flowers time. Specifically, the spring (each of the four entries is based on a season). I continue to read things that are seasonal, and at the wrong time. 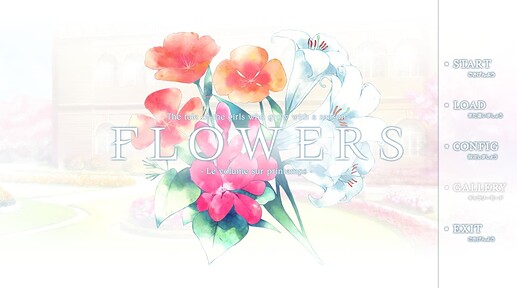 Content first impressions: I dig it. Lovely art, and I like the quiet, fragile, contemplative tone so far. It’s a solid contrast to Summer Pockets which had a totally energetic, outgoing vibe. Most of what I read was a girl stuck inside her head, beating herself up, and commenting on how pretty the girls around her are, haha. It was a nice prologue, but I didn’t move too much further, reading only a bit over 3000 characters, because…

Writing first impressions: Definitely feeling the challenge of starting something new. I’m also pretty sure this game’s writing is simply harder. They love kanji for words that don’t usually have it (筈 はず has a kanji, huh? and 為る as なる, all sorts of things I’ve never seen). The Catholic school slice of vocab teaching me words like 磔 (はりつけ, crucifixion) might not be immediately useful and certainly isn’t anything I’ve come across yet haha. But more than anything it’s just that sentences are a little denser than what I’ve been reading. Gotta brace myself for the のように, because we are making non-literal comparisons to everything all of the time. 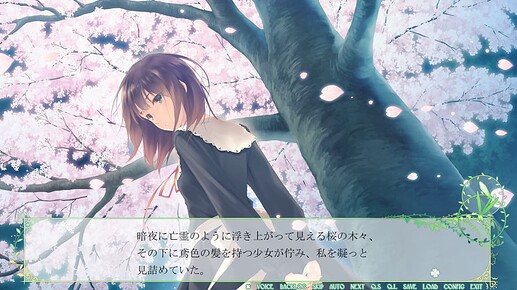 I read slowly in part because I had to look up words in almost every sentence, but also just because I made myself slow down a little to make sure I was soaking it all up. The writing seems really nice and… flowery (

), and often the difficulty is just making sure I can hold the whole sentence in my head, even when I definitely understand all of its parts. For example, lines like this are common:

You ask me, that’s a lot of information piled in there. To put a final pin in that point, a few lines in they hit me with another new N1 grammar point (たら最後, sort of an “if you do… negative result”). I expect to see a lot more of that stuff. Overall though, it’s a challenge, but I don’t feel too bad about it. I’m pretty confident I can comprehend and learn from this. My reading pace has taken a hard reset, but prior to Summer Pockets I have serious doubts about if I could’ve read this at all. I remain excited to continue.

They love kanji for words that don’t usually have it (筈 はず has a kanji, huh? and 為る as なる, all sorts of things I’ve never seen).

I’ve noticed this is a thing where they’re trying to give an old-timey or extra-formal-for-kicks vibe. It kind of makes sense given I mostly come across those in very old texts.

It took me a few passes to take all that in, oof. Very ‘flowery’ language as you said.