(and to your tutor too

I thought 三毛猫ホームズの推理 would be the first Japanese book I’d be reading alone, without a book club, but an impromptu book club did form after all, and I enjoyed having fellow readers with whom to exchange thoughts and speculations. This makes 告白 the first book I’m actually reading alone, and I suppose this is why I feel the need for constant, detailed updates. It’s funny, because I’ve been an avid reader my whole life, and never particularly cared about sharing my reading experiences with others, nor had I ever taken part in a book club before joining this forum, yet with Japanese books I feel like I need to share my thoughts on what I’m reading at all times.

So, in that vein, here’s a half-day update:
It’s now 100% confirmed that the teacher is in a classroom speaking to the students. At one point she comments on the corridor getting noisy, which would mean that lessons have finished and whoever wants to is free to go (I was wondering how long this speech of hers had lasted). Since she just said that out of the blue, it took me a second or two to realize that this wasn’t part of her main narrative, but a comment on something that was happening at that very moment. It’s things like this that make the book feel harder than others to me. She’s constantly jumping from one thing to another and also reacting to things happening in real time, things the reader can’t see and can only deduce from her reactions. It would probably be no problem in a language I’m actually fluent in, but in Japanese I need to be on high alert at all times. Even then I’m sure I’ve missed stuff. I’m aiming for 100% comprehension, but I fear it’s closer to 80% or lower, even with all the lookups.

Also, not that it was unexpected here given the premise, but I think I haven’t read a single Japanese book yet where a funeral isn’t featured at some point. Apparently it really is a thing (something I had wondered about earlier in this thread) to hold a 告別式 (memorial service) at different places that were part of the deceased’s life, like a workplace or a school or university. I also learned that it’s customary to offer money or other condolence gifts (香典) to the bereaved family.

Only read half of page 42 of かがみの孤城 today, because I was out the entire day having fun lol. I still have 40 minutes before my bedtime (since I have to wake up before 6am tomorrow) but I’ll spend that time trying to finish off my own video editing project. Will try my best to read at least three pages tomorrow.

Edit: Forgot to say. I told my Korean irl friend, who is also studying Japanese, about this challenge and me participating in it. She’s actually the friend I lent 魔女の宅急便 to when I finished it, but she said she was intimidated by the amount of kanji on the first page and it took her more than 10 minutes to read each page. She’s not keen on joining me here on an online forum, but I encouraged her to just do one together haha.

Read chapter 11 of デスノート ・ Death Note 📓 Vol. 2. Lots of dialog of L explaining things which made for some nice translation work and featured some interesting vocabulary

Since its the final day of April, I guess we are about half way through this challenge already!

I read Chapter 18 of Mitsuboshi Colors, which made me realise that its been AGES since I’ve been to a museum and now I want to go!
Only one more chapter left in this volume now

Then I read the next chapter of Teasing Master Takagi-san, which was a really sweet one.

About a traveller who is climbing a mountain and a giant snake appears and tries to eat him. In an attempt to stall he throws his belongings at the creature, then his clothing, but the snake just munches them all up until he is completely naked. It knocks him over and his trembling bum sticks into the air causing the snake to flee. Confused but happy to be alive the traveller runs away.

And since it’s the end of April and we’re halfway through this challenge, I’ve decided to do a little recap and think about my goals for May

I started reading about the Tokyo Train lines. This picture of people on the train at 5:00 AM makes me laugh. They look like I would at that hour! 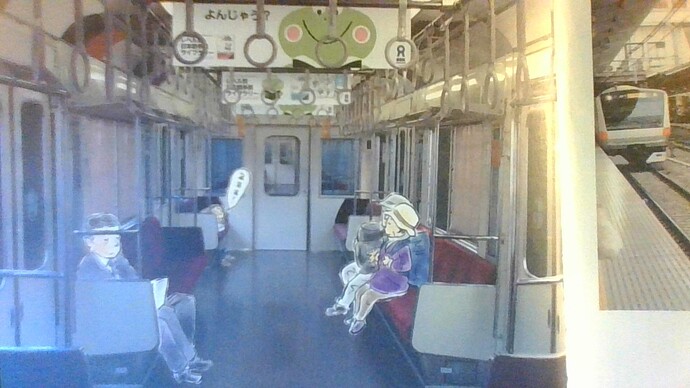 やまて
山の手 a hilly section of a city, Yamanote (a hilly part of Tokyo)

I ordered two more books from the “Learn Japanese with Stories” series last night. That will make the first four books of that series. I’ll try that series after I finish this set of Graded Readers. I’ll see which set
I like better.

Today I just played a video game in japanese with lots of text to read. No idea if that even counts but I just had no time to read books. I spent the time, I usually spend on reading books or manga, watching a movie in japanese.

@potatonaught A late happy birthday to you!

This picture of people on the train at 5:00 AM makes me laugh. They look like I would at that hour!

It’s still weird to me how suddenly I just went “wait, reading is easier now.” Read 7000 characters today, though I was fighting off a headache and getting a little distracted by people. See, I’m making excuses after reading more than I did any time but my absolute best days in the last challenge, haha. It really works if you stick it out.

This route’s really episodic and goofy so far, but there are a couple amusing running jokes that are keeping me really entertained. Half of the route has just been schemes to get スイカバー (frozen watermelon ice bars). 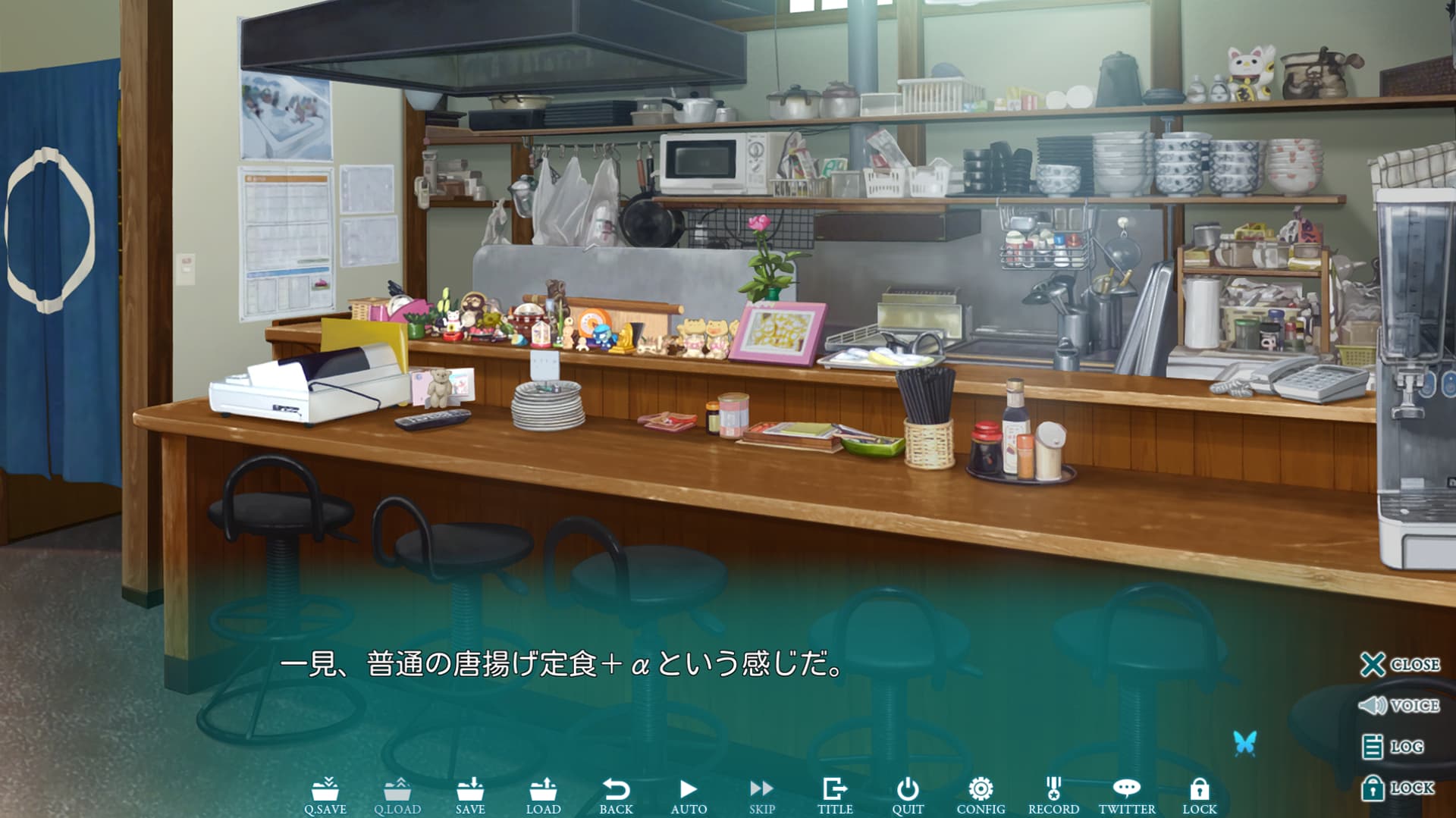 This language sure is chaotic sometimes though, huh? ＋α (プラスアルファ) means something along the lines of “a little more than usual.” Japanese just incorporates anything it wants; I can dig it.

That aside, 布石 (ふせき) is kind of an interesting word I discovered today. It refers to the opening moves in Go, but is used more broadly (and was here) to just mean preparation/groundwork. Seems likely, with the stone association, that it emerged from the Go use, which is kinda neat.

Continued with 坊っちゃん (坊ちゃん is not the spelling on my book actually, even if the kanji guessing keyboard (can’t remember what it is called) thought it should be…).

I’m really liking this and the intrigue is deepening. No idea what will end up being the truth.

I’m finding that if I reread trouble sentences multiple times I can usually figure out what they are trying to say. Today I also used DeepL a couple of times to try and help me figure out meaning. Mostly to confirm my understanding. Only one sentence I couldn’t figure out for sure what it meant.

「いてくれと頼まれても、いるものか！」(Said by 坊っちゃん)
I think I might know what the rough meaning is, but I honestly don’t trust my understanding. And the answers I got from DeepL (and tried Apple’s Translate app) didn’t make sense. (If more context is needed to guess the meaning, let me know.)

Last day of April and I’ve read every day so far. Very slowly. Well, I haven’t spent much time each day. I need to speed up a little more if I wanna catch up to where I should be with my yearly goal, but at this rate I will at least keep up, if not catch up what I missed. (My goals are three books/manga volumes/similar per quarter. And I finished one in April, and read nothing before then.)

I’m also very, very slowly working through my review pile (I never use vacation mode *shrug*) and I’ve also started some lessons from previous levels (aka new items added since I did those levels/added any lessons). Might be caught up review-wise by my birthday next month. (Yes, I am part of the May birthday crew.)

I love all the cute figurines on the counter!

Haha nice puzzle! The tricky part is to understand which of the oh-so-many いる is meant here

Luckily we know that it must be an ichidan verb because of its conjugation, so that restricts the choices somewhat. Looking through Jisho I decided on 癒る (to calm down) - if this doesn’t make sense in context, please bear with me

The translation then would be “Although I was asked to calm down, I will definitely not do so!” I guess.
(BTW thanks for helping me prepare for JLPT by showing me all those N2 grammar points

Yeah, my problem was definitely the いて because if I go with what was said before, that should be 行って… I’ll give some context and the sentence before that one.

坊っちゃん’s reply is confusing me

I believe he is (purposefully?) misunderstanding what the other person said. They asked him to leave, and he answered ‘as if I am)will be here just because I was asked to’ or something? I really thing this sentence needs context for sure.

Btw, I default to 居る for いる. If that doesn’t work, 要る. Very rarely have I encountered another meaning of いる in kana form, that also wasn’t obvious from context. If at all.

So, agree with @Daisoujou here.

Which, on second thought, works all without the complicated misunderstanding situation I thought of.

日本語: I read a lot of 冷たい密室と博士たち and finished it! Also a fair amount of TUGUMI and a fair amount of 三毛猫ホームズの推理.
Read-aloud: We read some of 蟲師. (And if I haven’t updated since before then, a different we read a chapter of ハイキュー.)

中国語: Every day I read an intermediate entry on Mandarin Bean and one page of 骑士幻想夜.