Basically, I’m failing to grasp 〜丁目 because my english is poor.
I don’t comprehend what a district of a town is, much less a city block.

Some people say there are no stupid questions. And I say this question is stupid for it has nothing to do with the japanese language, it’s just me not knowing enough english to understand the definitions.

Please help me I guess?
Also, in case by some miracle someone else here also speaks portuguese, feel free to answer in that. For this particular case I think it might help.

Nahh honestly, I don’t understand the different between those definition of towns, city blocks, city, etc. on Wanikani either. (I’m not an English native speaker) And I doubt those meanings are accurate to what they actually mean.

What I did I just put those vocab on google image so I guess the basic idea of what they actually mean. Then you could your own synonym on Wanikani.

I remember the first time I visited Japan I was so confuse WTF is prefecture?? I’ve never seen this word or the concept of prefecture before in my entire life. 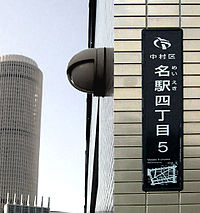 The Japanese addressing system is used to identify a specific location in Japan. When written in Japanese characters, addresses start with the largest geographical entity and proceed to the most specific one. When written in Latin characters, addresses follow the convention used by most Western addresses and start with the smallest geographic entity (typically a house number) and proceed to the largest. The Japanese system is complex and idiosyncratic, the product of the natural growth of urban ...

For addressing purposes, municipalities may be divided into chō or machi (町, which may be pronounced either way depending on the particular case) and/or aza (字). Despite using the same character as town, the machi here is purely a unit of address, not administration; likewise, there are also ku address divisions that are not administrative special wards. There are two common schemes:

I remember the first time I visited Japan I was so confuse WTF is prefecture?? I’ve never seen this word or the concept of prefecture before in my entire life.

yeah, it’s really annoying that different countries have different names for first-level administrative divisions. In my country the english translation of the term is ‘province’, while other countries will have ‘states’ or ‘prefectures’, that kind of thing.

This is specific only to Japan. Only Japan has 丁目. It’s not necessarily a block, but it could be. It basically occupies the same level of addressing as streets in western addresses. They don’t always name individual streets in Japan, but they always have 丁目.

That’s basically all you need to know for this, is that it’s a part of a town used for addresses.

Ok, so basically,
Either

I’m not really sure what you meant by this.

Aye, possibly you just need a more instinctual understanding of exactly what a 丁目 is rather than a translation into Portuguese. To build further on @Zeiosis’ post, you can see the 丁目 marked on Google Maps too. For example, here’s 浅草四丁目:

For a closer inspection of how Google displays the information: 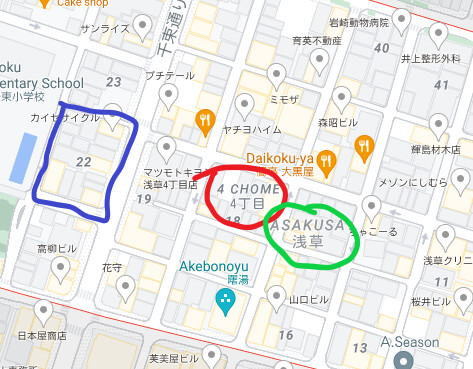 Here you can see the district name (circled in green) and the 丁目 number (circled in blue). You can also see the individual block numbers - here, I’ve outlined 4丁目22 in blue. And if you click on a building… 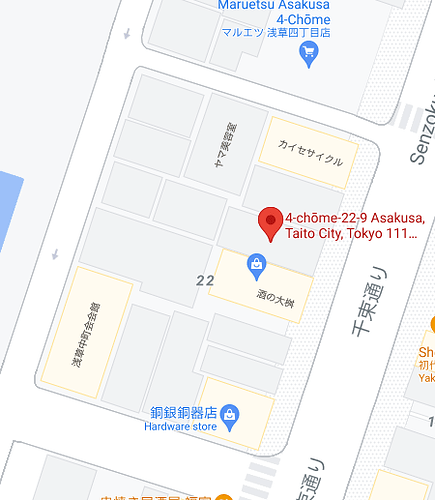 Google will give you the specific address. This one is 4丁目22－9. Though since I’ve got my Google set in English, it’s giving me the address in English-standard little-endian mode rather than Japanese-standard big-endian.

OOOH YES, I once saw a video on youtube talking about “hey guys check google maps out in hapan the streets don’t have names it’s the blocks” oh my god now I get what a chome is thank you so much leebo

Is there any pattern to how the buildings are numbered? Where I live in the US, even numbered buildings are all on one side of the street, and odd numbered ones are on the other. And the numbers either increase or decrease depending on whether you go up or down the street (though there are no greater patterns on which side corresponds to which direction or parity across cities that I know of). Looking at the map you’ve provided, the building numbers seem scattered throughout.

Earlier responses are correct. It will be easier to understand if you look at the Japanese map. FOr example, I attached a piece that shows the division of city part 伊都の杜 into three 丁目. The presence of 町 in the address is not all the time. In my cutrent address in Japan I have only 丁目. 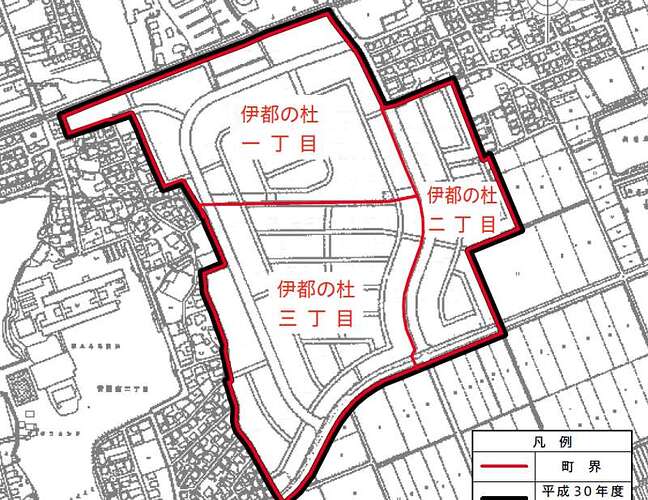 I’ve heard the first one is 1, the second one is 2 and so forth. no guarantee tho (I mean order in which they were built)

Oh, I thought you were making some kind of abstract comparison with letter sizes. I have never encountered a place called 字, though I was vaguely aware the meaning existed.

I guess remembering the reading for each one of these little adress knacks and that they are adress knacks should be enough for me, google maps should do the rest.

If this is true, that’s a very interesting way to keep track of the history of a 丁目 (and not a very useful way not to get lost unless you already know the place).

Hmm, I feel like I know what a city block is now. Thank yall!

Is there any pattern to how the buildings are numbered?

When it comes to the block numbers, the Asakusa map I posted above seems to be some kinda space-filling curve, like this: 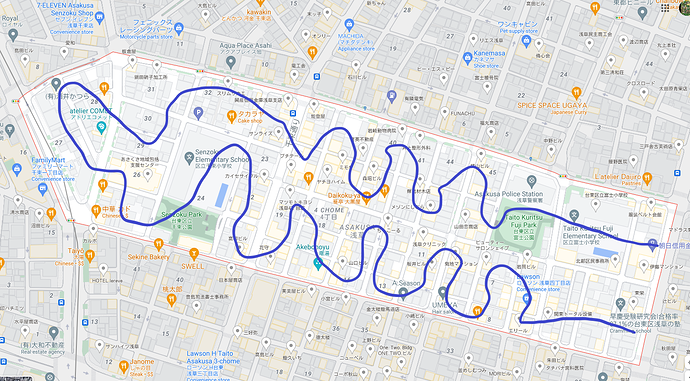 I guess remembering the reading for each one of these little adress knacks and that they are adress knacks should be enough for me, google maps should do the rest.

Yeah, there doesn’t seem to be an equivalent to 丁目 in the 大字 system. For example, this is 大字新曽 in Toda, Saitama:

If you start clicking on buildings, they’ve only got a single number after the city name, for example 埼玉県戸田市新曽2241