So I was using wkstats to look at various stats and things that I’ve completed so far, and I noticed that a vocab word from level 2 hasn’t shown up for me yet.

I was reading up about it, and since I have guru on the 大 kanji, I should be getting the vocab word, but for some reason I’m not. Is this a bug or has this word just been forbidden for new people or something?

Edit: It doesn’t even show on WaniKani’s list, which only shows 80 vocab words. Pretty confused…

Use the new site wkstats. The old one hasn’t been updated in years.

Wasn’t even aware there was a new one. Thanks!

大いに has been removed during the last few months (I am sure I studied it in October). The same fate for 今日は , 民, 乱交 and probably others beyond lv 30.
wkstats is updated but it is not complete yet. Which is why I personally keep using the old one. Just keep in mind that the old one is not being maintained.
If you check wkstats you will find even more incongruences.

Yeah, realized it wasn’t finished after I spent some time on it. Guess I’ll just have to keep in mind that some words will be inaccessible till then. Did they ever explain why they removed words?

Yep. Usually do in the content update thread. Basically it was because this is more of an uncommon word than it was made to seem early in the levels with a very nuanced meaning.

Hi all, sorry for the confusion about 大いに! We worked on improving the vocab word after receiving a user suggestion, and then decided later on to remove the word altogether (for now). It’s an obscure word anyway with a nuanced use, and we felt it didn’t belong in level 1. The reading for the kanji is covered in other vocab words, so we decided to remove.

Bringing this up again. (ﾉ◕ヮ◕)ﾉ*:･ﾟ✧

I took a visit to WK stats today and saw a few words that I hadn’t encountered in my reviews from earlier lesions, namely 力いっぱい, 山びこ, テーブルの上, and ベッドの下. 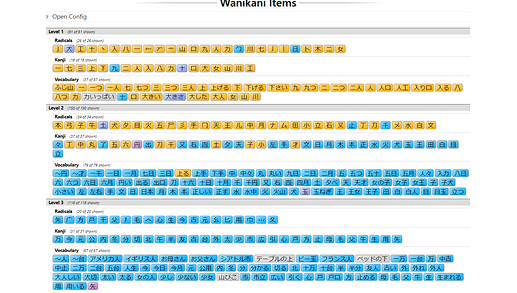 The odd thing is when I followed their respective links to WaniKani, they all suddenly show up in my lessons. None of them have audio available either.

Would this be another case of outdated/scrapped WaniKani entries? Is anyone else still having this issue? Really curious

They were just added the other day. Mentioned in the weekly content update.

We have lots of lovely new content to add to WaniKani, starting Thursday, April 29. The plan is to add a small number of new members to the family each week, to keep things manageable for lessons and reviews. Depending on feedback, we might speed up the additions a little, or slow them down if it’s getting too much. We’ll probably hide some items too, either because they’re really obscure, or because we have lots of other (more useful) words to practice a particular kanji r…

I was going to ask the same thing. I was about to do my lesson to clear up the kanji queue, and then was surprised to get some vocab from earlier levels.
Is it typical for WaniKani to be adding and removing vocab list?
EDIT: nevermind saw the post about new content by the poster above just now

Ohh phew, that clears things up, thanks!

Eh? My dictionary marks it “common”!