I had a question about how to tell the difference in the katakana for ro and the mouth kanji. I can pick it out during reading because of context, but I would like to know for the sake of my own writing XD. At the moment, they pretty much look the same when I’m writing them, so please let me know if I missed some difference that I should include when writing them down.

On my phone at least, the ro katakana looks slightly smaller. 口ロ

That doesn’t help much with writing though since writing is so imprecise.

I think it’s a matter of size. “Ro” is smaller and “mouth” is bigger. Also, by looking at the computer font, it seems that “mouth” has the two vertical lines sticking out of the bottom slightly.
ロ口
Left: ro
Right: mouth

Also you will be able to differentiate them quite easily by context.

Though obviously it also depends on what the sentence is actually trying to say.

You guys seem to have the same general consensus that I’ve come to. I “try” to make my mouth kanji have the legs, although, mostly it seems to end up peg-legged for some reason.

I will try to make the mouth kanji a little taller too.

Context is the key. Context is always the key in Japanese.

You guys seem to have the same general consensus that I’ve come to. I “try” to make my mouth kanji have the legs, although, mostly it seems to end up peg-legged for some reason.

The mouth kanji doesn’t have the feet when handwritten. They’re just serifs.

This is super helpful! I haven’t gotten to some of these, but the comparisons are very useful. Thank you! (Good thing about the feet since I’ve been trying to make sure to have them and still don’t get them in somehow!)

As far as I know they are written in exactly the same way. There may be some small subtle difference present in certain typefaces like size or serifs, but for the most part they’re differentiated by context alone. Barakamon had a gag about it: 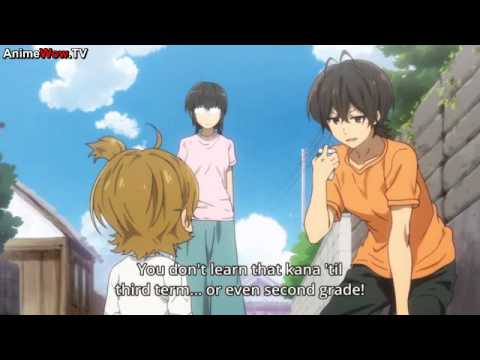 Lool, not how I thought that was going to end.

Ha, I was literally thinking of the same thing!
I was going to find it too but looks like you beat me to it.

Here was me being all proud when I read メロン and said “You can’t trick me with your Kanji! That says Mekōn!”

Who were you saying this to?

The context sentence on the computer lesson thingy…