Looks like the same dev also released Ni no Kuni Cross Worlds. Have you tried that?

Nope, but it looks like my phone won’t be able to handle it judging by the graphics

I need to go and continue playing Pokémon Sword or Brilliant Diamond or Let’s Go Eevee, because I plan on playing Scarlet/Violet in Japanese this fall. I want that to be the first game I just pick up in Japanese

I just watched the Japanese trailer for Scarlet and Violet. Like in Arceus they use full Furigana now instead of choosing between Kanji and Kana mode.

Yeah, I also noticed that change. I looked at some screens to see if sword/shield had that, but they didn’t. Brilliant Diamond/Shining Pearl I covered before, that had separate modes as well. I’m sure it is the same for Let’s Go Pikachu/Eeevee and New Pokémon Snap.

I went back to my playthrough of Sword in english as well, so I can get ready for Violet when it comes out. That will be in Japanese again, no doubt. Might be the most friendly pokémon game for language learners.

Nope, every other mainline game starting from Gen 5 had either full Kanji or full Kana. I thought Arceus had the Furigana because of it was kind of a spinoff. No idea about New Pokémon Snap.

Actually, I prefer Kanji without Furigana, because I really need to work at reading without Yomichan or Furigana.

I decided to buy METAL GEAR SOLID V: GROUND ZEROES just now (around 20 USD, no discount). (While concurrently watch a clip on the game on YouTube.) But the comment says – the best most expensive demo ever?

I bought it anyway. However, Japanese games in general are expensive? I don’t even know what to try first…

Although, both games can’t make use of my ultra-wide monitor…

But the comment says – the best most expensive demo ever?

It is a really short game and only really the introduction to MGS V The Phantom Pain. There’s also MGS V The Definitive Experience which includes both MGS V games, that’s the only version I’d recommend today. And the steam summer sale is going to start soon (I think in around 10 days or so?), so I’d wait for that

If you bought it on Steam and haven’t played it for more than two hours yet, then I’d definitely return MGS V Ground Zeroes, and get the pack with the two games in two weeks. I’d guess the bundle would go for 4 to 10 bucks on sale

The game’s just one mission basically, I don’t even understand why they released it separately, it could’ve been the intro mission to Phantom Pain and nobody would’ve batted an eye.

It is a really short game and only really the introduction to MGS V The Phantom Pain. There’s also MGS V The Definitive Experience which includes both MGS V games, that’s the only version I’d recommend today.

My issue isn’t listed. (Or I selected a wrong issue category.) 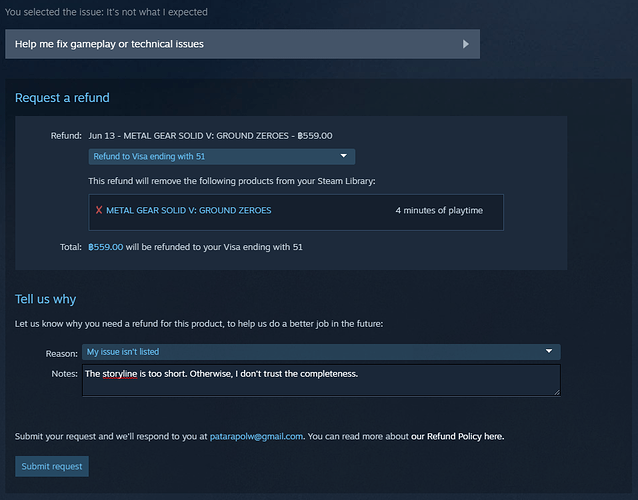 I have gone barely past the start screen (to Settings screen). Almost started (Mission / difficulty select screen), but I received a phone call just then.

Still, by a quick glimpse, it is definitely on my radar.

Doesn’t really matter what you select, Steam lets you refund for any reason with less than 2 hours playtime (possibly within 14 days of purchase? Not sure about that)

Yeah, as yami said, they don’t really care about the reason you list anyway as long as you have less than 120 minutes of playtime and the purchase was within the last 14 days. I’d be surprised if anyone even looks at these refund requests when those conditions are met

You can request a refund for nearly any purchase on Steam—for any reason. Maybe your PC doesn’t meet the hardware requirements; maybe you bought a game by mistake; maybe you played the title for an hour and just didn’t like it.

It doesn’t matter. Valve will, upon request via help.steampowered.com, issue a refund for any reason, if the request is made within the required return period, and, in the case of games, if the title has been played for less than two hours.

I played them when I first started learning Japanese before coming here to Wanikani and had a blast, but if you already know hiragana and katakana, it won’t be much use to you, and for kanji I prefer wanikani over the learn kanji to survive.

And the steam summer sale is going to start soon (I think in around 10 days or so?)

And the total price doesn’t add up. Around a little less than 20 USD is gone from my wallet. 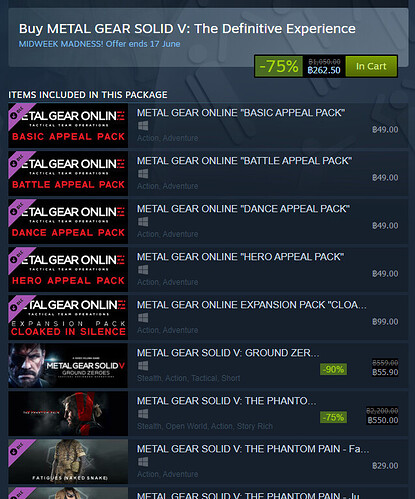 Oh wow, it seems you’ve just had great timing and MGS V is now currently on sale though it hasn’t been earlier today

Well, in that case you wouldn’t even need to wait for the Steam Sale in 10 days. But I’m not entirely sure what’s the source of your confusion now

I have close to 40 hours in Ground Zeroes, it’s one map but it has plenty of different missions taking place in that map. Only one story mission though.

NIOH is pretty good if you like challenging high-pace combat!

I think the Japanese spoken in it is a bit antiquated though, which makes sense considering it’s not exactly set in modern-day Japan. Not sure if it’s even halfway faithful to the actual time it’s supposed to be set in though

No doubts about the historical accuracy of it though. Tokugawa Ieyasu was definitely fighting yokai. This is established fact and nothing you say can change my mind.

And the total price doesn’t add up. Around a little less than 20 USD is gone from my wallet.

It might be that the lower discount wins in this case. They don’t add up, though, even if there are overlapping sales or an item is in multiple sales at the same time.

I was at some point investigating how easy it is to install Skyrim in Japanese while already having the game installed. Afaik, you need to install again. One can’t simply swap languages in and out like in Switch games

Which one should I buy first in Yakuza series? It might also matter that my screen is ultra wide HD.

Steam made it convenient to buy games, but then return them anyway. (Usually they do look interesting, but I have some problems…)