Is there a script to repeatedly present incorrect item?

Effectively do what bishbashbosh does?

If you get the item wrong it asks again before presenting any other items.

I occasionally get myself into a situation where I’ve done too many lessons and my reviews will take twice or three times as long as they should as I churn answering the same stinking item wrong multiple times because my feeble, miserable, tiny brain will forget in the 4 minutes it’s taken to come up again amidst the 20 other items I’ve seen since.

A little more seriously, I think this is part of a problem I’m noticing where I’m learning items incorrectly and that is being reinforced by waiting 3 minutes and then entering the same incorrect answer again. I’m really massively frustrated today. It was a heavy day at work and I’m looking at a review pile that I know is going to be a churn nightmare. I can get the same item wrong 3, 4 times in a review session. And yeah, yeah, stop slow down, change something up. And I do that often, but sometimes I just need to get through the review pile and I just want to get through the review pile.

I just want to take each item once. If I get it wrong I want to wanikani to give it to me again immediately and then move on, and not see that item until it’s next scheduled review.

I honestly don’t think I know how to use all the features here, and I think it’s the 1x1 checkbox that is giving me what I want, but it’s like a breath of fresh air. The items remaining count is always accurate, and I’m no longer reinforcing wrong answers. It appears to be presenting my reviews in random order but when I get one wrong it stays on it, until I’ve gotten it right (still marked wrong for SRS purposes as appropriate) but I’m able to move on, and reviews are progressing more quickly. 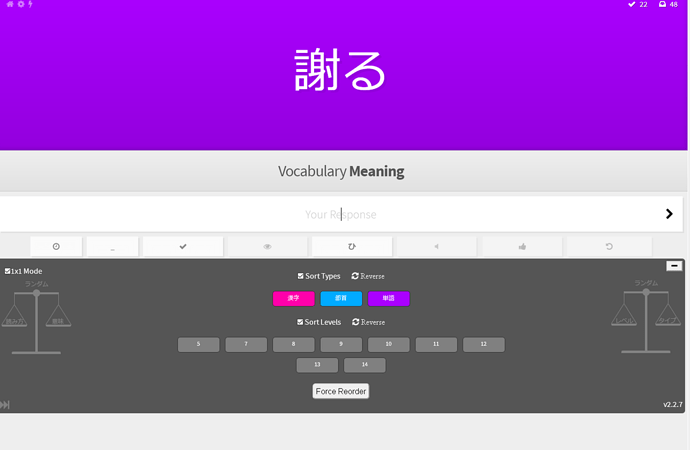 1x1 mode asks for the reading and meaning at the same time… it’ll do what you’re wanting as well, but normally you have a set of around 10 kanji/vocab that you’re answering a mixture of readings and meanings for… 1x1 makes it so you’re just doing 1 at a time.

I don’t have hard data to support this assertion but it seems to me if I have 70 items in my queue and a working window of 10 items then N of those 10 items might have been marked wrong but the window can slide through M where M is much greater than 10 items before presenting any given item from the set of N again. Which means it can be an extended period of time before that wrong item pops up again. Eventually if all 10 items in the set of N wrong items were at some point marked wrong then the next item would be one you had gotten wrong.

This really should be a native setting within WK.

You’re right, it can be more than 10 items later that it comes back up, you just have 10 active items at a time (so you can wrap up at any time).

Fairly certain not allowing an immediate re-entry is on purpose, since it’s assumed you would have looked at the correct answer, it puts it back into the review stack and then you have a chance to recall, otherwise you’re just typing the answer and won’t know if you recall it at all until 4+ hours later. I’ve had new vocab that I’ll get wrong 3-4 time during the initial review and the delay on a re-entry does help to actually force myself to recall… I’ve had cases where the re-entry happens right away (after I’ve just seen the answer) and I tend to just miss it 4 hours later as a result if I really didn’t remember. So I can’t imagine they’d add an option to entirely skip the recall on missed items within WK natively.

Fairly certain not allowing an immediate re-entry is on purpose,

I’m sure that’s the case. It’s just that my brain doesn’t work very well that way as I’ll tend reinforce the wrong answer on recall. And that’s counterproductive. BishBashBosh works much better for me for initial early-term memorization. So I want to get through my reviews. The ones I got wrong, I got wrong, and then I want to go reinforce the correct answers and mnemonics in BBB, instead of recalling the wrong answer N times, which happens far more often that I want it to.