Is there a Japanese Grammar SRS?

Hey, I’m sure that I’m not the first person to ask this question, but does anyone know of a spaced-repetition-system that teaches Japanese grammar or sentence structure. You all know how it is; you can learn gobs of vocab, but if you don’t know how to put it into practice it’s pretty useless. I know basic stuff, but I struggle with sentences longer than Subject は Adjective です. or Direct Object は Indirect Object/ Subject が Activity/ Noun を/ _ Verb.

Yeah. I can tell.

I’m honestly not really sure how you’d SRS grammar. I feel like the best way to study grammar is once you’ve learnt it, you get lots of exposure to large numbers of different sentences. 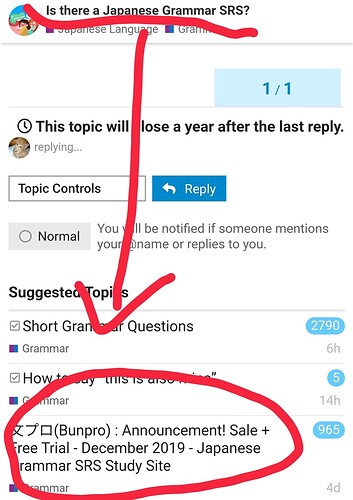 If you want a proper answer

Bunpro is quite popular for that very purpose! It’s paid now though, so your best free alternative (to my knowledge) is Duolingo.

Before everyone gets out their pitchforks, yes I know it’s not the best Japanese learning tool in the world and it can introduce a lot of bad habits, but as long as you aren’t relying on it for your sole Japanese learning resource, it can be quite useful for building up practice with Japanese sentences. It won’t explain the grammar it teaches, but it will give you the necessary practice through SRS.

Edit:
I was so quick trying to be the first reply (sorry) that I forgot about LingoDeer. I haven’t used it in about a year (or for Japanese at all, I used it for Korean), but it’s sort of like Duolingo if it was better designed for East Asian language, with more thought put into teaching grammar. Just another alternative to consider.

I personally like Bunpo the app (Not related to Bunpro). It is free until you hit some later lessons then you have to subscribe. It does have SRS, which is good, but on Android it is currently bugged to where I can’t progress. I’ve even reported it via email to the creators with no response… so I’m actually having a hard time recommending it. The content is great though, way better than Bunpro which literally just gives you a ton of links and says go figure it out yourself sonny!

Bunpro is there and it has it’s uses. For me, at least, it’s not as usedful as SRS is for vocabulary. It’s not terribly useful from a parsing sentences perspective. I’d rather something that worked the other way, pick out the grammar points and tells the system what what do/mean.

I keep up with Bunpro but find active reading and listening more useful. Next on my list is to do more composition pick a few grammar points every week and write something using them. I was doing this for a while on Instagram but have been slacking off. I should start an Ameba or Japanese Twitter account and get back to it.

Wow, thanks everyone. I wasn’t expecting replies that fast. All of those are super helpful (except maybe the first one)

I don’t think i’m about to pay for resources when there are so many free ones out there, but I will try almost everything else including that Ameba thing. Again thanks.

There is bunpro which is the most highly recommended method on the forums. I haven’t used it so I can’t attest to it. Another option, though it takes more effort, is to find your own example sentences and put them into anki. Use the example sentences from whatever textbook or website you’re using for grammar and plug them into anki. I recommend E-J, but J-E would work too. You can even create your own sentences based on ones from the textbook/website, and I find this extremely helpful when I’m struggling with certain vocab. Putting vocab in a sentence makes them much easier to remember.