Interest in userscript to handle items after they're burned?

I’ve always disliked how items get burned – previously I’d just resurrect them instantly, but that eventually created a lot of churn. There are some existing userscripts that try to solve this problem, but they’re either unmaintained or don’t work very well (IMO).

Ideally, items would just stay in ‘enlightened’ forever and never get burned. I implemented this for Kaniwani (see Feature request: Add a setting to disable burning items · Issue #450 · Kaniwani/kw-backend · GitHub ) and looked into how close I could get to this with Wanikani’s API.

Long story short, I created a userscript for myself that keeps track of an item’s progression assuming that there was no burn level, and lets you resurrect and re-burn items that are due for a review.

For example, here’s a screenshot of the data for an individual card, which shows that this particular card would still be enlightened if it weren’t burned: 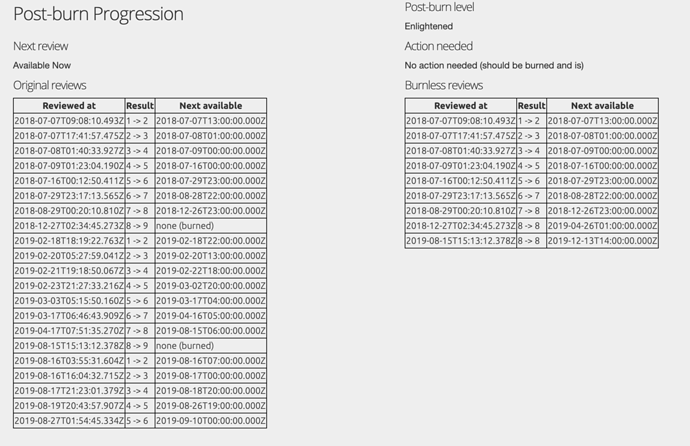 The main view in the dashboard is this: 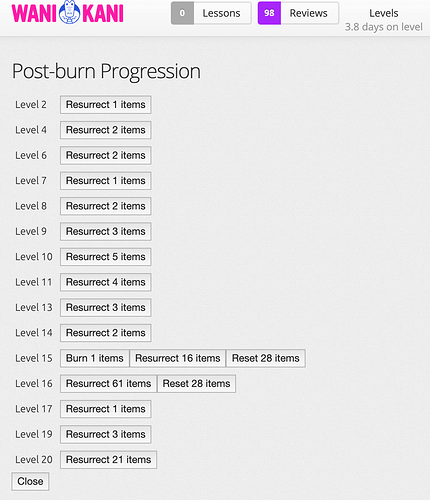 I’ve found that this keeps me refreshed on all my burned items, while not having such a huge load as when I resurrected every burned item instantly. It’s also much simpler to maintain than some other burned item review scripts I’ve seen, since I don’t have to build my own review UI.

Anyway, would anyone else be interested in using such a userscript? If so, I can polish it up a bit more and then release it publically.

Anyway, would anyone else be interested in using such a userscript?

I already port my reviews to Anki, so I wouldn’t need it, but I think you would have a huge user base if you completed it. It’s an often requested feature. I would have loved to have had this a year ago

Yes, I’d love to have this userscript! There have been several kanji that I’ve forgotten already and this will surely help keep me on top of my Japanese studies.

This seems pretty cool but are you doing this for ALL burned items? Why not just the ones you’ve forgotten? Perhaps you should consider why you are forgetting so many burned items.

It’s not like I go over English words every 6 months to check which ones I forgot. If you are reading enough Japanese, it should be the same.

Not to poo-poo your idea, but I think another method might be more useful. For example doing KameSame, writing kanji, or reading, reading, and more reading. Review the words in the wild, while doing something you enjoy, and the vocabulary will stick even more than whatever a flashcard SRS is going to do for you.

I think sometimes we get hung up on the fun of the WaniKani method and neglect other ways to study.

If items are kept at enlightened, the standard 4 month interval would still be in effect, so you wouldn’t be seeing them all the time, however you will see them occasionally and check if your memory of them is good. Burned items are taken out of the system completely and you will forget them eventually if not exposed to them through other means. (While reading will expose you to a lot of words, it’s statistically unlikely you’ll get to see absolutely all the WaniKani words in the wild).

If I don’t see the WaniKani words in the wild, then I don’t need to use valuable brain space to hold them. Good riddance!

I suspect that if you forget a burned WK word in the wild, that you’ll be that much more apt to remember it later - perhaps more-so than if you had reviewed it additionally here. Personally, though I have used resurrect liberally in the past (mostly on kanji), I think you can overdo a study method.

I’d like a way to be quizzed at random on some of my burned items, and the ones I get wrong would be pulled back a couple of levels (rather than being fully resurrected.)

Agreed. I really like the idea of the SRS going forever, but it would probably be a waste of time

Anyway, would anyone else be interested in using such a userscript? If so, I can polish it up a bit more and then release it publically.

I am definitely interested, and there are many people interested in having the burn items coming back every N other months.

[Resurrect to Enlightened instead of Apprentice]

For those interested in easier resurrecting, there is a user script that rfindley wrote that will help manage burned items. I used it for resurrecting kanji by level, but at this point I’ve gone up through 60 again, though I have a few sticklers I still haven’t burned the first time!

Thanks all, looks like this will be useful to other people, so I’ll work on releasing my userscript!

I see what you mean, but if you are ‘statistically unlikely’ to come across those words in your life, why bother studying them again and again?

Sounds a lot like studying a dictionary one page at a time.

You could instead use that time to study other common words that aren’t in WK but are in books, newspapers, dramas, and everyday conversations.

Maybe you’re right, but I hate the idea of forgetting something I learned. You never know when you’re gonna need it.

I’d like a way to be quizzed at random on some of my burned items, and the ones I get wrong would be pulled back a couple of levels (rather than being fully resurrected.)

This is exactly what I want, and I want it as an app, not a userscript. The concept of burn is solid-- I remember plenty of words from the first time I learned Japanese 20 years ago, despite not reviewing them at all, or at least, barely ever, in the intervening decades. I want my truly burned items to stay burned.