If I recall correctly, Wanikani translates it as “as for me” or “personally” or something like that. But a quick internet search mostly offers up results that make it sound like this is a formal/academic way to talk about one’s life or like…inner self–deep stuff.

I was planning on using it in this sentence (for a basic Japanese college course assignment)
めいぶつはおすしですが、私自身はおすしをあまりたべません。
“The famous thing is sushi, but personally, I rarely eat it.”

As for the second half of the sentence, I don’t believe the は after 私自身 is necessary, but maybe I’m wrong or that’s a more casual way of speaking.

gotcha- for the assignment we’re required to talk about what’s the “famous thing” from a restaurant, and this one’s happens to be sushi-but maybe it’s still not appropriate? I’m not sure, since you’re right-it seems more like a “regional specialty in japan only” kind of connotation.
“kono resutoran no yuumeina tabemono wa nandesuka?” is the question, if that helps??

Did you mean ありますが? You can’t have です after a plain verb like that.

You can’t have です after a plain verb like that.

Technically you’re correct, but I see this pattern so often in anime/manga that even though I know it’s incorrect, it doesn’t feel like it is

Hmm, not sure I can say the same, though I don’t watch much anime / read much manga.

I think it’s because I’ve been studying あるんです lately so I got lazy. Leebo is probably right, in the context of a school assignment.

Oh! You can say that sushi is ゆうめいなたべもの ! That’s not a problem, and you shouldn’t be penalized for using that same phrase in your answer.

I can’t really understand why they do it, but manga/anime is full of unnatural speech patterns ですわよ. It’s probably meant to sound cutesy

I’m not sure if this is just like… in the context of characters who have their own sentence ending catchphrases or something. Like saying にゃ at the end of everything, but instead saying です after everything, no matter what.

I know you’re not arguing it’s correct, but yeah, the sentence in question is for a school assignment.

Which is serious enough to warrant fully correct standard Japanese. No arguments here

I could be wrong, but perhaps what you’re hearing is actually -んです? If you don’t hear the ん, then it might sound like they’re attaching です directly onto a verb.

No, I’m pretty sure

I put those images into HiNative to ask for a native speaker’s opinion. This is the first answer that I got. 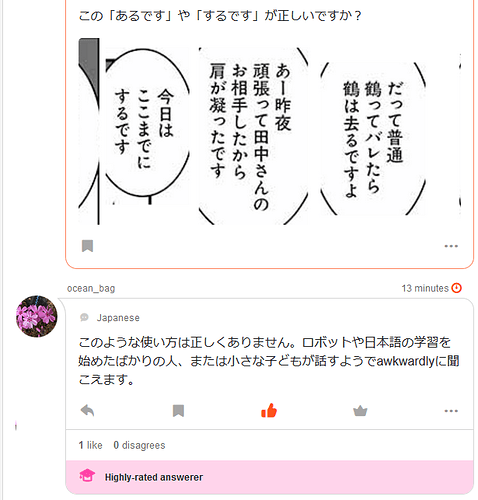 Basically, it sort of gives the impression that the speaker is illiterate. Were the characters saying those lines children?

Adding です at the end of every sentence, does feel kiddy. Common in anime, manga, light novels, etc.

Though, I’m surrounded by kids all the time at school and basically never hear that kind of incorrect grammar. I’d be curious what more natives think of the examples.

In fact the more I think about it, really little kids just hardly use です at all, because it is keigo. So maybe this is how people imagine kids would make a mistake with language, but I don’t think it’s a reflection of anything in reality.

HiNative is kind of hit or miss. It’s rare to get a detailed answer, and you’re also competing with many other people to get an answer for your question. I doubt this one person’s opinion is representative of the entire population.

I don’t have an issue with their answer… But the manga lines don’t strike me as coming from someone young enough to make that egregious of an error. It’s incongruous anyway.

I’d be curious what more natives think of the examples.

Basically just agreeing with that.

It didn’t feel like the people saying those lines were children either. I guess without context it’s difficult to tell what’s going on.