My biggest difficulty thus far is trying to discern if the the つ I’m looking at is a big つ or a small っ, as it’s difficult to tell.

It will get easier over time as you get used to the font. The real issues start when the author starts using very odd fonts to give characters a personality.

*Said gorbit, then went back to reading just to struggle with the exact issue he said will go away with practice*

Yay, well done! Starting to read is the hardest part and you did it!

It will only get easier from here (although not very fast).

Regarding つ and っ, you will probably not be happy to hear that they keep being easy to confuse in manga - it’s almost as if it’s on purpose. I’ll share the following image from Death Note. It’s a comparison between つ and っ from the same line of text: I magnified the image to extremes and then copied and pasted the っ in red over the つ . No naked eye could tell the difference, I’m sure you’ll agree. I’m afraid the way to actually tell which is which is to know what to expect, what is likely and what isn’t. This comes with repeated exposure (and grammar awareness), but there will always be moments when you’re unsure, as I’ve found. 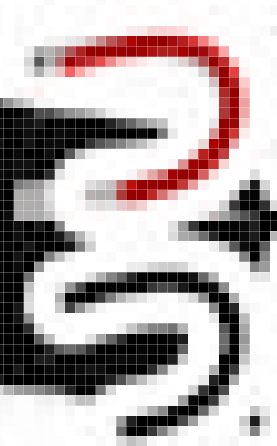 You’re telling me the red one is supposed to be the small っ?! まさか！

The other thing I find difficult (taking なめたい as an example) is when something could’ve been written with a Kanji (舐めたい) but wasn’t. I get that some things become so popular/colloquialised to the point where the Kanji won’t be necessary, but when there are so many homophones as is… And I’m going through all the trouble to learn Kanji and then the langauge is like “lol we don’t use it now :)”. クソー!

I get that some things become so popular/colloquialised

And yeah, it becomes even more troublesome when it is changed its Kana, or collapsed, and isn’t in a dictionary anymore, and no segmentation software could help.

At this point, the only thing that may help sometimes, is simple Google search (and read explanation in Japanese).

but when there are so many homophones as is

Which is why children’s books, written in all, or mostly, hiragana, tend to be harder for beginners that one would expect. Native children have a wide vocabulary but limited kanji knowledge. We learners tend to be the other way round.
That said, seeing a word in hiragana in a non-children’s book doesn’t mean it’s not commonly written in kanji too. Writers tend to pick and choose seemingly randomly whether to use kanji at any given time. I’ve occasionally seen the same word with kanji and without on the same page, only a few sentences apart.

I know a few days late, but I found this article really helpful.

What does anata, omae, temee, kimi and kisama mean in Japanese? What's the difference between these words?

Finished this week’s reading! Although a bit late. Almost time for next week’s chapter…

If you feel Manga is too burdensome try graded readers!
I love them and they start out really easy from n5 all the way up to n2 difficulty!
For more info check out the wanikani reading club here: Graded Readers and Parallel Texts "Book Club"

There’s also this thread, I’ve read through it and it’s probably perfect for beginners.

Hi everyone, I have been learning Japanese for a bit more than 3 years now. I started with Duolingo and after a few weeks/months I felt ready to read real Japanese (in hindsight, I reckon that was pretty naive…). The problem : I could not find anything that was easy, free, and fun. Since then I have worked on producing such content myself and the result is here. There is about 30 pages of very simple content that I personally find fun and pleasant. Words are introduced using Emojis and other…

Thank y’all so much

I caught up with the book club after finding this thread today. Thanks again for organising this!

I’m enjoying the story more in the second chapter. Wondering how the MC is going to live his life… I don’t know how long he can stay with his family and go to school now he’s craving blood… but he seems able to resist it so far.

まじめに means serious but also proper / sensible. For example, if school kids are acting まじめに when doing their work it doesn’t necessarily mean they are all super serious, but that they’re acting sensibly.

In this context, まじめに means more like properly and sensibly.

So, he’s telling himself to act sensibly in the situation (i.e. not go on the floor and sniff the girl, but to stand up straight and compose himself.) Hope that helps!

Everybody gangsta till Nunoka starts saying 3 lines a textbox

hahahahahaha! Thanks for that…

Yes this is the name of the boy who was laughing at them on the previous page - 勇樹. The kanji are courage and wood (both in wanikani). Jisho says when read with this reading it’s a female given name or a surname - so perhaps his surname. It comes up again on page 79.

I have a lot of Japanese relatives and I always thought it was a female name (a couple of cousins anyway). Either it’s his surname or maybe names are less “gender oriented” these days in Japan?

According to Wiktionary it’s a male name unless spelled 夕希 or 有希. I too had only come across it as a female name so far, but that’s neither here nor there.

Week 5 thread is up.

Happiness Book Club - Week 5 Chapter 3 (part 1) ・ Pages 87-111 Start Date: April 2nd Week 4: Link Week 6: Link Home page: Link We’re reading volume 1 of this manga as part of the Absolute Beginner Book Club. [image] Vocabulary Sheet Building the vocab spreadsheet for the book is a joint project and everyone is welcome to contribute. Please read the instructions on the first page if you are doing this for the first time. https://docs.google.com/spreadsheets/d/1MqsGF_B_Aw3yDxsWE57xY9rq…

I’ve finished week 4, after some concentrated effort today (& thanks @Gorbit99, I found your translation in this thread really helpful when I was getting stuck

)。
I think the story is starting to pick up pace, and reading is getting a little easier (or my lookup is getting smoother through practice😂)
Onwards to week 5!

I’ve been reading along for the last few days and am going through this part now.
Page 74(? I think?) Is the girl talking about herself in 3rd person or am I misreading that? When she says 菜緒の足

I think that’s a mistake, the bubble should probably be pointing to the left, or it shouldn’t say 菜緒

No I don’t think it’s a mistake. It’s possible in Japanese to refer to oneself in third person. Though it’s a very childish thing to do and associated with small children mostly.
I suspect she wants to sound cute there and they are still in 1st class in high shool so auround 15? I assume.