Do Japanese people leave off dakuten?

In my country it’s common to leave off diacritics, when typing on a phone. For those who don’t know, they are written by holding down the base letter, for example a, and then choosing the proper letter in the pop-up, like á. The time for the pop-up to appear can usually be set on more modern keyboards, but for most that just makes them accidentally type them and instead they just ignore them, which is not an issue 99.9% of the time.
When japanese type on the 12 kex layout, writing tentens, or making small tsus, or especially marus needs more time, so do they leave it off? I assume autocorrect would put them in if it can.

I’m not entirely sure what you mean…
But the small tsu is just typing your letter 2 times, and it does it automatically.
I can’t imagine they would let it go to autocorrect, because that word could exist also?

That’s why I said “When typing on the 12 key layout”. There you make a tsu and you make it small.

I still think they would do it, since it is really important for a meaning.

I don’t think any Japanese would leave dakuten or handakuten off intentionally. It might happen due to typos, but in my experience leaving it out usually screws up the conversion suggestions rather than getting fixed by autocorrect or something.

We regularly leave off diacritics that change the entire meaning of words. Context is a powerful thing and your brain can usually guess what was said without you noticing.

usually screws up the conversion suggestions

Interestingly enough, I tried typing かっこう on my phone and got 学校 as the second suggestion. かつこう got it as the first suggestion. That might work less well with less-common words, though.

We regularly leave off diacritics that change the entire meaning of words.

Does leaving off the diacritic change the pronunciation as well?

I don’t get that at all. Maybe mine is weird: 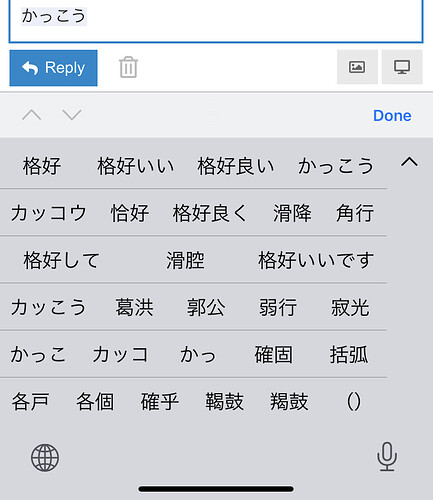 I love how かっこう (because of かっこ) gives you parentheses as an option.

Maybe I’ve just been teaching mine bad habits by accident. Not that I’d tried to get 学校 from かっこう before this thread. I’m pretty sure. (Though, I might have occasionally tried guessing the reading of a word in a book and got the rendaku wrong but found the right one in the suggestion list anyway…) 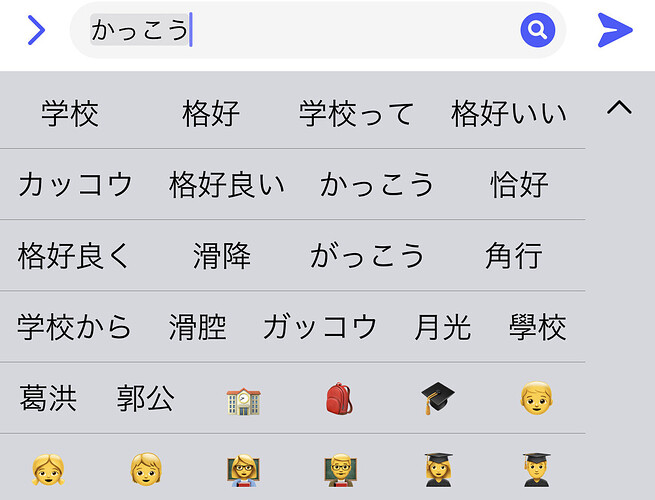 Maybe I’ve just been teaching mine bad habits by accident

That’s entirely possible, although it is cool that you get so many emoji recommendations. Scrolling all the way down all I get is

love how かっこう (because of かっこ) gives you parentheses as an option.

Hah, I didn’t even notice it was there until you pointed it out.

Does leaving off the diacritic change the pronunciation as well?

Of course, greatly, in some cases it turns a long vowel into a short one, in other cases it changes the sound entirely.

I can imagine this is similar to English speakers writing like

Where you can understand everything, and no one would read “im” as anything other than “I’m” even though phonetically “im” should be quite different.

Japanese people do take shortcuts in casual written speech, but it tends to be in things like omitting particles or making severe abbreviations. I don’t recall ever seeing dakuten get left off.

Not entirely sure who I should reply to but…

I’m pretty sure (at least on my phone) there is a setting buried in there that lets you turn predictive suggestions on or off… in other words, if it should also suggest words that start with が when you type か or not. Could explain the discrepancy.

When japanese type on the 12 kex layout, writing tentens, or making small tsus, or especially marus needs more time, so do they leave it off? I assume autocorrect would put them in if it can.

I’ve never seen it happen, but here are my thoughts: as powerful as context is, Japanese is already heavily context-dependent to begin with, and it also has a huge number of homophones thanks to imported Chinese vocabulary and Japanese words coined based on those kanji readings. Leaving dakuten out would probably raise the need to rely on context so much that it’d be almost impossible to decipher words with ease. I don’t really have a good example in mind, but you could take, say… そのことから and そのことがら. Granted, the second is quite formal and is usually written using kanji (その事柄), but that’s literally the difference between ‘from that fact,…’ and ‘that matter’.

That’s why I said “When typing on the 12 key layout”. There you make a tsu and you make it small.

It’s true that you need a few more keystrokes and it’s not the same as typing a consonant twice, but apparently Japanese people can go really fast with flick input because they’re so used to it. We should probably also consider some other facts: the 12-key format is smaller than a QWERTY or similar standard keyboard, so there’s less space to travel between keys, and instead of the 2-3 letters we need to type per kana on a full-sized keyboard, flick input allows people to type every single kana with one keystroke (plus one flick, if necessary). If you think about it that way, things like adding extra っ and so on really aren’t much of an extra time investment.

(I’m definitely not as proficient as a Japanese person, but I type Japanese on my phone using flick input exclusively – I only tested rōmaji once or twice very early on because I couldn’t recall the kana locations fast enough for a long message – and I really don’t feel as though I’m losing much time, never mind the fact that for the reasons I raised above, I don’t think autocorrect would be able to fix such things automatically due to the sheer number of possibilities for each base kana (i.e. no dakuten) combination in Japanese.)

Up until the orthography reform in 1900 it was extremely common to leave out dakuten. Dakuten have existed for a long time but they were only used sporadically. Japanese people were able to recognize Japanese words regardless of whether or not dakuten were used. Often they only used dakuten to annotate Chinese texts because they weren’t able to intuitively know each word in a foreign text.
I have not seen Japanese people leave out dakuten in text messages BUT theoretically it would still be understandable for a native speaker without too much trouble.

While it may be common in some languages to leave out diacritics, there are also languages where you don’t usually see it. For example, the ä, ö, ü in German: I never leave them out even when my keyboard layout makes it harder and I don’t see other Germans do it either. So I guess it also depends on the language?

Interesting question, never occured to me, even though very possibly I am from the same country as you (confirmed by a quick google stalking) and I do this all the time in my native language (especially since I bought a keyboard with US layout). I don’t envy people now who try to learn our language and talk to natives.

In my mother tongue leaving out diacritics makes for a funny read, but not even context is needed to understand what’s being written.

Japanese has a rather narrow spectrum of possible sounds/phonemes so dakuten is fairly meaningful.