I was reading a book a little bit ago and one of the lines was “困るなぁ勝手なことされるの” which was officially translated as “it bothers me when you do these things” but shouldn’t 困るなぁ be prohibitive and translate to “don’t be bothered” I tried 食べるなぁ in translate and it came out as the prohibitive “don’t eat” so why is 困るなぁ different? 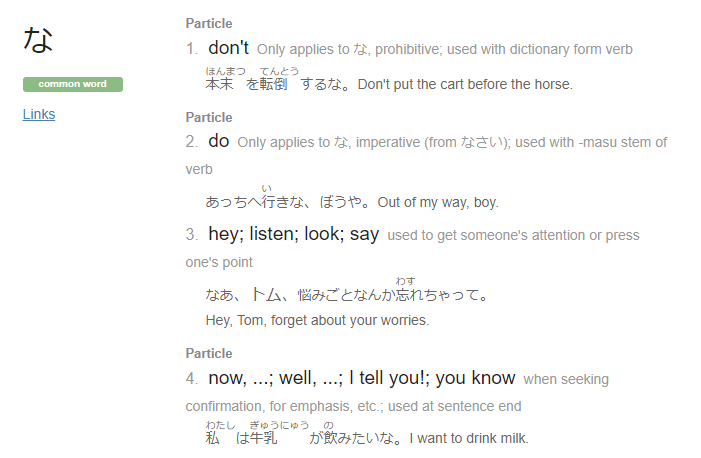 As for why it’s not definition 1… it just sounds strange to think of 困るな to someone as a prohibition. You can’t really tell someone not to be troubled by other people doing selfish things to them. (Confirmed with a native that 困るな meaning “don’t be bothered” is very strange).

I also assume from the context that it would just not make sense given what surrounds it. Based on who did what and said what.

I thought it was only me.

When it’s prohibitive it’s always a short な
If you see なぁ it’s for emphasis, similar to ね

Yep, the long na (naa) makes it emphasis (this bothers/troubles me). A short na would negate (and make it don’t worry (loose translation) or don’t be bothered/troubled(<- the translation we are taught))

I’m really not sure it could be “prohibition against 困る” no matter how long the な is.

quite true, it has to be taken in context

Ohh I see I always thought that な if it was after a verb automatically made it prohibitive I didn’t know it could be used as a sentence ending particle. Thanks for insight this should clear up a lot of my misunderstandings when reading now