Are there any English words that Wanikani forced you to learn how to spell?

Sort of,
I didn’t need to learn them to get an answer right
But I ended up finally learning it was spelt “February” not “Febuary” and “Forty” instead of “Fourty”

Twenty-four years as a native speaker of English, in England, and I’ve only just now learnt that seperate isn’t a real word.

(And I agree, Mediterranean too.)

Shoutout to my primary school phonics teachers who kept repeating “spell it how it sounds” to me despite the fact so much of English phonetics directly contradicts this. I was 16 when I realised project didn’t have a ‘d’ in it

I can’t understand why onomatopoeia is spelled such in American English. Another is always underlined as incorrect, and I refused to accept the fact.

I always think to how I was taught it as “I before E, except after C”, but there are way more exceptions than you’d expect, like when you have a weird feisty beige neighbour

I especially like how the pronunciation changes across those words

I googled more exceptions to the rule and man that was a bad idea, because now I’m spiralling. 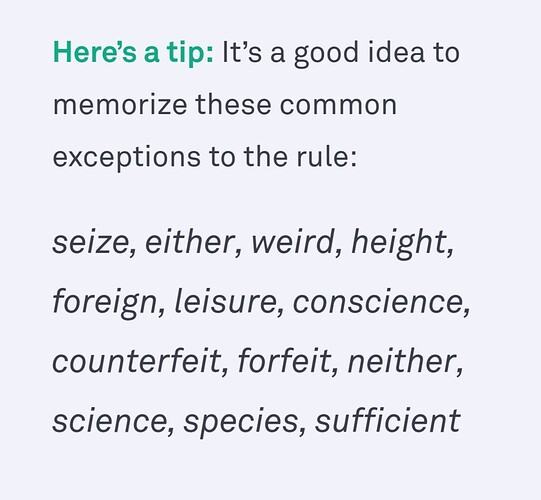 Right!!? i before e except after c or when sounding like a as in neighbor or sleigh! And also 5,000 other tiny exceptions! D: It’s too wierd!! Weird!! Ugh!!

Took a while to get indispensable right… kept typing indispensible. Tried to find why it’s one or the other, but only managed to conclude you just need to memorize it.

Found out I’ve been spelling receive wrong my whole life…

It’s not just after c, it’s also if it’s pronounced えい. But then there are still other exceptions.

Brian Regan has a fun bit that touches on “i before e”. I believe the bit is called “Stupid In School,” but the relevant joke was:

“I before E except after C, and when sounding like “a” as in neighbor or weigh; and on weekends and holidays and all throughout May and you’ll always be wrong no matter what you say! …It’s a harsh rule.”

Seems like most of the words being mentioned here are derived/loaned from other languages (as English does) … Latin, Greek, Italian, French, German etc … if it’s hard for us as native speakers, imagine trying to learn as a non native speaker!

tip for anyone else that also struggles with mediterranean every time: it’s mediTERRAnean as in “terra” (latin for earth, or, you know… the FF6 character)

For me it was “absorption.”

I was bored a few months ago and came up with my own list of exceptions for the I before E except after blah blah or when sounding like blah blah rule.

Turns out, that rule is crap and there are more exceptions than things that it catches.

I would say none of the ie words are actual exceptions because they all are “ci e”, not “c ie”. Similar thing going on with therein, wherein, and herein. The whole rule for ie vs ei is for when the ie or ei is its own thing. Oh also ei in their and heir is pronounced as “a” so I wouldn’t say they’re an exception either.