A Rabbit Hole Into 鬱

This is going to be quite a long read so tl;dr at the bottom.

So I’m an ALT, and earlier I was talking to the English teacher after a lesson. He was asking me about my kanji studies and he asked me what my favourite kanji was. I said I really liked 桜, which is quite typical, it’s a very nice kanji. But I also jokingly said I liked 鬱. Naturally he was surprised, so he googled the kanji on his PC to check if I meant that one. The conversation ended and I got back to my reviews before another teacher walked over and saw the google search. She got curious and asked about it, and one thing led to another and she ended up saying that 鬱 was used in the non-gairaigo word for turmeric.

In the time I’ve been in Japan, I’ve only ever seen turmeric as ターメリック in Japanese, but apparently it is known natively as うこん, which is usually written as 鬱金. Pretty interesting, but nothing ground breaking right? Well, I got curious and I wanted to know why turmeric is “gloomy gold”, because if you’ve ever seen turmeric, that’s not very accurate. So I looked it up, which led me to this: 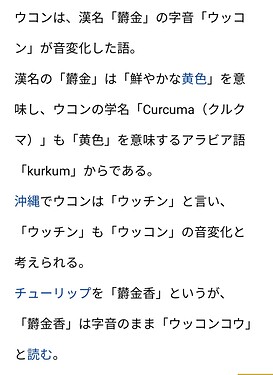 So for ウコン, it was originally ウッコン and it came from Chinese (if I’m interpreting this correctly). But for the kanji component, 鬱金 apparently means “a vivid(/fresh/etc.) yellow”. That makes more sense- wait, why does that come from 鬱??? That kanji means gloom/melancholy, that’s the complete opposite feeling! 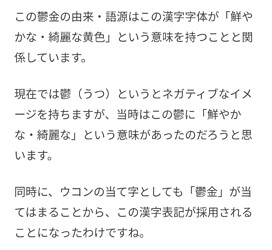 Here’s another resource. This says that 鬱 used to have a meaning of “vivid”, or “pretty”.

I no longer care about turmeric, I now have to know why 鬱 is apparently living a double life. So I google the etymology of 鬱, and I find this article, with the many definitions of 鬱 and the kanji composition history: 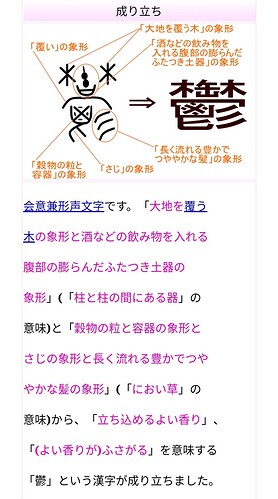 In particular, these two definitions stick out and match up with the history. “A nice grass smell”, “an enveloping (good) smell”. Admittedly the history composition bit goes over my head a little, but talk of trees covering the land and grains seems to be along the right track, so how does that get to “gloomy”?

Well, one of the definitions listed for 鬱 is ふさぐ: 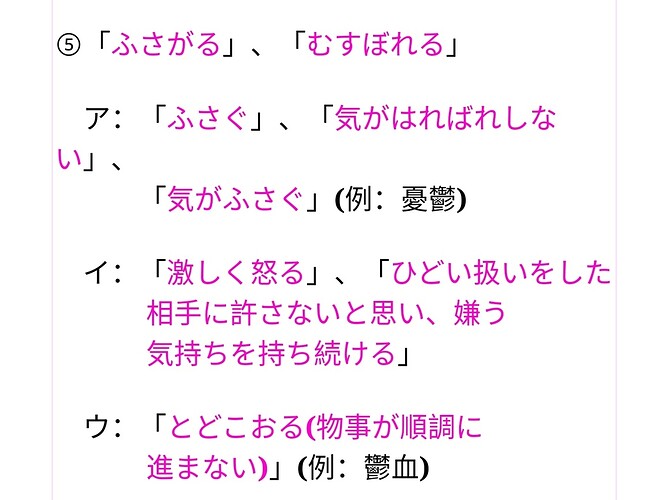 鬱 has this listed as a reading on jisho, which you can look up (鬱ぐ). This means “to feel depressed”/“to be in low spirits”/“to mope”. All matching the meaning we know, but completely unrelated to its history. Well, if you type out ふさぐ, you may get a suggestion on your IME. 塞ぐ has the same reading, but a different meaning. That being “to close”/“to block”/"to “obstruct”/“to fill up”/etc., But also “to feel depressed”. So apparently there’s a connection between these two meanings, and I think I’ve cracked it. Although I have to say to anyone still reading, my Japanese isn’t perfect and neither is my googling. The actual origin could be as clear as day somewhere and I just missed it. This is all conjecture.

So, originally the kanji had the meaning of “an enveloping good smell”. I think this matches up with the “to fill up” definition pretty well. The good smell (of grass) is filling up the air, obstructing other smells. Thus, the kanji came to be associated with blocking. Then eventually through some means, this came to be used in the definitions 気がはればれしない, and 気がふさぐ, I’m assuming because if something is blocking things in your mind/soul, then it will not be clear, thus you have a foggy feeling. And finally, that association links to the feeling of melancholy, or gloominess, when everything is foggy and dark in your mind.

Of course like I said, this is all conjecture and there’s a good chance I’m very wrong. I didn’t even touch on the many other definitions of 鬱, or even the fact that there’s a simplified version of the kanji, 欝. If you read all of this, I’m very sorry.

tl;dr: I went insane trying to figure out the history of 鬱, blame turmeric.

edit: I just found this article which breaks down the composition really well. Towards the end of this article, they write:

I’m not entirely sure what they mean about the lid component at the end, it seems pretty inconclusive to me

This was interesting to read.
It is one of the kanji I feel more attached to.

Yeah I never really thought about why 鬱蒼 means what it means now that I think about it. Not the first time I’ve just taken something for what it is though lol. Interesting post nonetheless

So, originally the kanji had the meaning of “an enveloping good smell”. I think this matches up with the “to fill up” definition pretty well. The good smell (of grass) is filling up the air, obstructing other smells. Thus, the kanji came to be associated with blocking. Then eventually through some means, this came to be used in the definitions 気がはればれしない, and 気がふさぐ, I’m assuming because if something is blocking things in your mind/soul, then it will not be clear, thus you have a foggy feeling. And finally, that association links to the feeling of melancholy, or gloominess, when everything is foggy and dark in your mind.

Actually, if you look it up in Chinese (or if you check the kanji meanings in a monolingual dictionary, like on this Goo辞書 page), you’ll see that there are other meanings for the kanji when it’s not used alone as a word, and those meanings are listed before the ‘depressed’ meaning (which, by the way, might be a bit of a mistranslation), namely:

Taken all together, what this suggests is that the original meaning of 鬱 is for something (particularly plants, which would make sense given the presence of two 木) to be thick or heavily concentrated, especially in a single location. This would also explain why it can be used for emotions besides depression and sorrow, as in the word 鬱憤=‘pent-up anger, frustration’. This is why I said that the ‘obstructed’ or ‘bottled up’ explanation is more helpful than interpreting ふさぐ as 鬱ぐ: when everything is crammed into a single space, especially negative emotions, you’ll tend to feel uncomfortable, and if you can’t get it off your chest (which is how it feels when we’re experiencing intense, unpleasant emotions, no? Everything’s stuck – ‘bottled up’, as it were – inside our chests, and we experience an unwelcome pressure), you end up with the longer-term versions of those emotions like depression, frustration, pent-up rage… and so on. Everything can be explained by linking all the meanings of 鬱 to its fundamental ‘thick, concentrated in one place’ meaning, which would mean that the presence of positive and negative meanings for 鬱 isn’t actually all that paradoxical. This may not be etymologically correct – I’ll need to run through the bits of your post that I skimmed again, but I think the kanji diagram mentions a lot of ‘covering’, ‘swelling up’ and containers, so I think it matches up well – but at the very least, it seems to provide a central thread that ties all the meanings of 鬱 together, starting from the ones that are listed first.

I’m not entirely sure what they mean about the lid component at the end, it seems pretty inconclusive to me

I think you’re referring to the final sentence, right? I’ll try to provide a rough translation of the whole thing, because I think it actually comes together pretty well with what I was saying about being ‘bottled up’:

「鬱」は「抑鬱（よくうつ）」など「ふさがれた」意味と、林が「鬱蒼（うっそう）」と盛んに茂る意味など、一見相反する意味があります。でもふたをした甕の様子と、そこで盛んに醸される香り酒を考えれば相反することではないのです。
「鬱」has meanings like ‘to be obstructed’ and ‘for a forest to be lush, flourishing’, which are contradictory at first glance. However, if one considers the appearance of an earthen jar that has been covered with a lid and fragrant wine that is vigorously being fermented within it, they are not[, in fact,] contradictory [ideas].

In other words, this explanation has quite literally chosen the metaphor of something bottled up, full of vigour and very much concentrated in order to encapsulate the ideas expressed by 鬱.

I might try to push through the bits of your post I didn’t read when I have the energy to look up the readings and/or meanings of all the words I’m not familiar with in your research, but either way, thanks a lot for the interesting read and food for thought!

On the flip side, language is just weird and lots of words have opposite meanings due to how people use or misuse them over time. 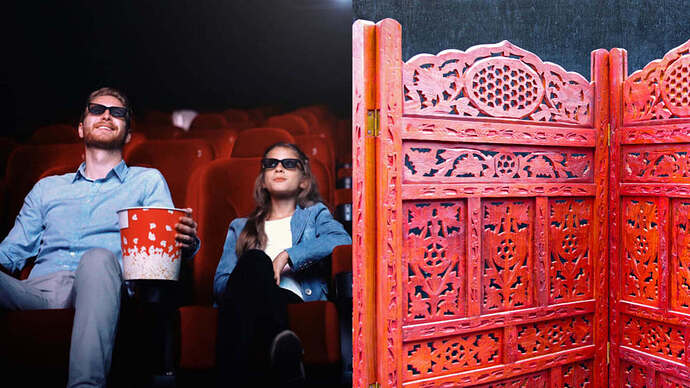 25 Words That Are Their Own Opposites

You're about to stumble into the looking-glass world of contronyms—words that are their own antonyms.

That list leaves out one of my favorites, which I can only assume developed the double meaning because people didn’t have enough context clues surrounding it’s usage and given two choices, assumed the opposite of it’s original usage. 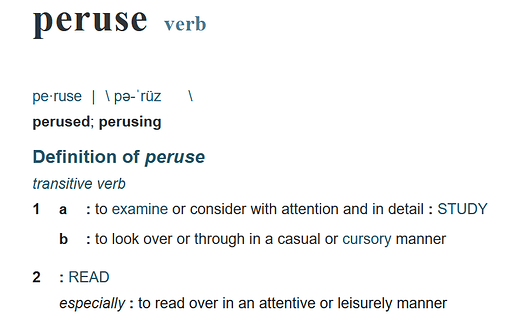