My one addition to what you wrote

, it was a bit nerve-wracking writing that out as I’m still very new to this

is that I believe 帰らなくちゃ is provisional as well, but with the いけない unspoken

When writing this out I was left with the impression that 帰らなくちゃ somehow also had the same connotations as いけない but I wasn’t sure what the exact way it got that was, as I was kind of inferring it from context. Double checking with both Deepl and Google Translate they seemed to agree.

I went with it being a clarification of the previous line (refining return to return home), but I much prefer your implicit いけない.

Sorry I am not following this book but I happened to check out this page and it seemed interesting.
However I have one question that I deeply desire to be answered.

To extrapolate on the last couple pages currently being discussed - my take on meaning:

Since there are two consecutive sentences basically saying the same thing, I took it as an important emphasis.

The first line is basically stoic, logical, “I must got back.”

So it’s almost like she was catching herself at the end, and could non-literally be translated to something like “I have to go back. I must go home, in order to defend it.”

Also emphasized was the collective naming- 私たちの海市国, so she’s not thinking just about herself, at least another member of the presented characters is also from where she’s from, this “ocean city country” as I’m taking it lol.

Anybody else primarily on mobile and struggling with line breaks in spoiler blurs??

My understanding is わた is an old word for “ocean”, and の is an old way to refer to a vast ocean.

I’m under the impression it’s been replaced by , but you can use the old reading with the current kanji for .

At least, that is the basic information I’ve been able to piece together.

I’m ill-equipped to link anything right now, but it was discussed (if not in this thread than the main thread for this book club) that わたのはら was an accepted name-reading for this kanji. So this is a variation from that, the た becomming だ.

Curious if anyone knows if there is any importance in that though, the た to だ portion. Does it make it cute? More old-timey? Mysterious?

There was some brief discussion on this in the main thread, a quick search for “reading” in there gave me some posts, here is possibly a good starting point for that discussion

It’s just an abbreviation; you can do it with ～ないと・～なきゃ as well (really any of these patterns can have the second half omitted, but with the others you usually write out the whole thing).

Double checking with both Deepl and Google Translate they seemed to agree.

I don’t know how often you use MTL to check things but I really must impress upon you that it’s a terrible idea. Putting aside the obvious nonsense…

…I’ve seen loads of examples of stuff that’s totally wrong in a much more believable way, which is where they really get you. GT and Deepl are not authorities. They are in fact pretty terrible at Japanese.

Here are a few where it just gets the meaning totally wrong: 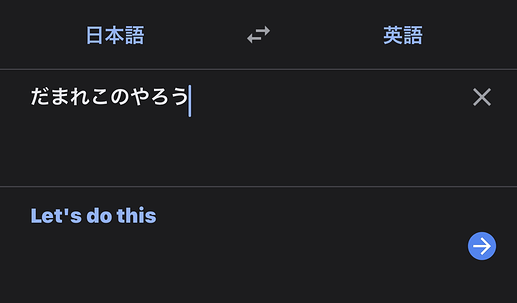 image1242×728 57.8 KB
(should be “shut up, you b****d”; this one is sort of dangerous because I can easily imagine a context where the google translation would also make sense if you didn’t know any better) 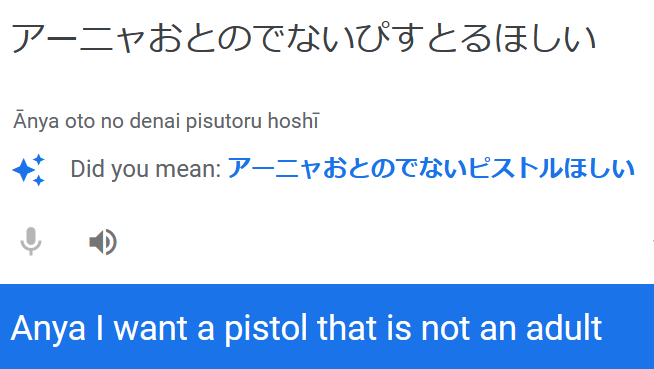 These are just a small selection from my collection; it’s really truly terrible.

This is brilliant, hilarious insight

It’s just an abbreviation; you can do it with ～ないと・～なきゃ as well (really any of these patterns can have the second half omitted, but with the others you usually write out the whole thing).

When you say ‘any of these patterns’ what do you mean? Just any suffix pattern?

Naively that might lead to ambiguity, I guess you just infer which longer form is being contracted from context?

I don’t know how often you use MTL to check things but I really must impress upon you that it’s a terrible idea.

I think this comes down to what is meant by ‘check’. I completely agree that MTL carries risks, but I also think they can be a useful tool if used very carefully.

I tried to be specific with ‘double checking’, as I already had an expected meaning from breaking down the grammar and from the context, but I wanted to see if Ichi.moe/DeepL/GTranslate gave me something completely different in which case I might try dig into why.

Concretely for 帰らなくちゃ, MTL was able to infer the ‘must’ component from this isolated fragment without context - which added weight to this fragment being provisional and implying some other component (いけない) - but since I hadn’t encountered this before I didn’t add that to my initial response as I would need to learn that from somewhere more authoritative before I consider it correct. 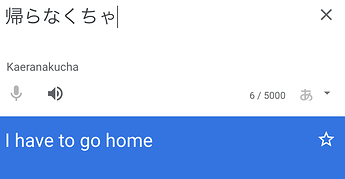 When you say ‘any of these patterns’ what do you mean?

Any of the “have to” patterns, like ～なければならない・～ないとだめ・～なくてはいけない and so on. If you see なくちゃ or anything similar at the end of a sentence, it means “have to…” 100% of the time.

There’s no ambiguity because there’s basically no difference between them. In super-formal scenarios where you need to use the exact right form for the particular nuance (which is an imprecise science to put it mildly), you would be using the whole form anyway and not abbreviating anything.

Concretely for 帰らなくちゃ, MTL was able to infer the ‘must’ component from this isolated fragment without context

I mean, fair…but it’s hardly inference at all, it’s just one word in a very common form. If this kind of one-word query is all you’re ever searching for then I guess I won’t push it but I’ve seen so many plausible yet wrong results come out of MTL services, I really really feel like you would do better looking literally anywhere else. Whenever I come across a new pattern I don’t know, I just google it with the word “JLPT” after it and in the majority of cases I get a hit like this:

…which brings me to this page on the excellent jlptsensei blog, complete with lots of example sentences and explanations on how this particular piece is used.

That grammar was new to me too. I found some Bunpro links for reference:

Any of the “have to” patterns, like ～なければならない・～ないとだめ・～なくてはいけない and so on. If you see なくちゃ or anything similar at the end of a sentence, it means “have to…” 100% of the time.

Oh now I get you, I wasn’t sure if “any of these patterns” meant more than just the “have to” - thanks for taking the time to explain and clarify!

There’s no ambiguity because there’s basically no difference between them.

I thought maybe you were saying something about a larger pattern of contractions, so I was asking about ambiguity. Say if we encountered 心配して in isolation we couldn’t necessarily infer it was てもいい. Now I understand you just meant the ‘must’ patterns, it makes much more sense

but it’s hardly inference at all

Fair, ‘inference’ is probably not a good word choice on my part.

I was meaning that I don’t think I’d encountered the なくちゃ form without something following it (at least not consciously), so I hadn’t yet made the connection that from なくちゃ we can just infer “must not” (even though from context I thought that seemed right), I was thinking maybe this was an informal / manga grammar thing rather than a more well-known rule.

(‘infer’ is still probably not a good word, maybe ‘uncontract’ is better?)

I will also search for very short snippets of like word + attached things (after attacking it with a dictionary and ichi.moe). For example earlier the double negation of 戻らなければいけない - on a bad day I might put this into MTL to double-check my phrasing of the double negation, or for another string if I find my translation is too literal and I can’t seem to summon a softer English phrasing.

I appreciate the sentiment behind your warning, MTL is a very sharp tool.

…which brings me to this page on the excellent jlptsensei blog

I should have Googled for it, in my private breakdown notes I have an outstanding TODO covering this but I hadn’t got around to it yet, thanks for the link.

Thank you all for your help.
I have added it to Bunpro but Im still struggling with conjugating into those forms.

I finished the prologue! A day before the next chapter, as planned. I hope I can keep up reading two pages a day.

I have added it to Bunpro but Im still struggling with conjugating into those forms.

I tried for a long time to learn all this conjugation whatnot, and it never stuck.

Then I started reading manga, and over time I slowly came to recognize more and more. Most of it I now know on sight, without even thinking about it.

It just takes time and exposure.

The chapter 1 thread is now up and linked in the schedule!

Hello! Just wanna thank everyone for their inputs!

Last Saturday, I was also put off by the first page as I didn’t grasp much of the thoughts that I ended up stopping after 15 mins as I had other stuff to do.

Today, went back to read the rest of the prologue first instead and didn’t have too much trouble. I hope I can keep up!

I didnt read the first page either…I think I tried the forst two bubbles and then quit haha
As really an absolute beginner the rest of the pages have been tough enough.

saaame here haha but thanks to the helpful vocab sheet everything else went fairly smoothly!

I’m a couple days behind on the reading, but I just finished the prologue. Overall I didn’t have too much trouble with it, mostly just a lot of new vocabulary. I do have one question about page 6 though

image284×604 62.1 KB
In this frame it looks like the person to the front right is saying the first line and one of the two that had been talking before is replying… but that doesn’t make sense to me…
I’m admittedly not great at reading manga/comics, so maybe I’m not quite following. I feel like, given the contents, the first line should be being said by Wadanohara and the reply by Kuromasa (if I’ve correctly identified the short person with the white hat and the taller one with the black hat, respectively). And relatedly, do we know who the front right person is? Is that the familiar(?) that was calling out on the previous page?
3 Likes
chrisosaurus September 19, 2021, 9:20am #148

That’s exactly right, the person in the bottom right of the frame is saying わ〜あとどれくらいで着くの？

do we know who the front right person is? Is that the familiar(?) that was calling out on the previous page?

Exactly right, its the same person who was calling out わだち〜!! in the previous panel.

Here is the dialogue lines written out for the last panel of page 5 and the first of page 6, including a blurred out rough English translation