号 vs 番号 for the meaning of "number"

I was wondering if there is some reason that the kanji for number also has the 番号 usage in vocabulary. I have often heard 番号 used in conversation, but I wasn’t previously aware of the use of 号 by itself.
Is there some grammatical reason that the word 番号 needs both kanji to be used together, or can you also just use 号 by itself and it means the same thing?

I’m new to studying vocabulary, so I’m sorry if my question seems silly.

The kanji 号 can mean number (often used as a suffix or part of a compound, as in [Room #1]), but also has other meanings outside of “number”. 番号 usually refers to a series of digits or some kind of ordering of numbers (the kanji 番 here implies some kind of ordering). The easiest example is (phone number), which is a specific series of numbers to represent something (your contact number).

Thanks for your reply

Okay. So… 号 by itself is the “concept” of number, and 番号 is a sequence of numbers (which could be any amount).

Furthermore, 号 used with kanji other than 番 is basically a counter for numbers.

Did I understand you correctly?

号 by itself is the “concept” of number

For your purposes, I suppose you could think of it that way. I think it’s more like something you attach to numbers to “symbol”-ize them, if that makes sense. Down the line, a lot of kanji (including 号) have multiple meanings. It can also mean to let out a loud noise vocally or be a suffix for names, for example.

Mostly yes. It often takes the place of “No.” or “#” (octothorpe/pound sign, not hashtag) if you want an English equivalent.

Ok. Thank you for the clarification.

The fact that 号 has multiple meanings makes everything a lot clearer to me.

You hear 号 a lot in reference to trains, if you’re into that - for example, on the Shinkansen, the Hikari #33 is 三十三号 in Japanese, and the indiviual carriages are counted with 号車, and you’re going to hear every single carriage mentioned every time the train pulls out of a station (i.e. in the context of “Car 1 is the Green Car, car 2, car 3 and car 4 are reserved seating, car 5 and car 6 are unreserved seating, toilets may be found in car 1, car 3 and car 5, and a smoking room in car 4. The toilet in car 1 may only be used by Green Car passengers”). Been trying to find an example recording of this on YouTube, but my search fu is week.

Is this what you seek? @Belthazar 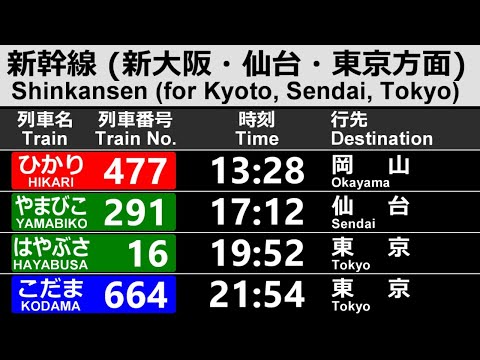 That be the one. And there’s even a 番号 on the visual.

Off topic: I went on vacation to Japan back in October. I miss Japan. Hearing this makes me miss it more…

Ooo, I was there in October too. Did you get Hagibis right in the face, like I did?

YouTube has many nostalgia-inducing videos of trains and train announcements and station jingles and such.

Yup, my friends and I were staying in Asakusa, Tokyo. Stayed indoors on that Saturday watching Ghibli movies expecting the storm to go on all day, but didn’t really feel the storm until the evening. Went to Tsukiji the next day which wasn’t fully open due to the aftermath of the storm.

I was in Chichibu for the Ryusei Matsuri on the Sunday. Just arrived in Japan Friday night, and caught the train for Chichibu first thing Saturday morning as originally planned (because if I didn’t I may not have been able to get to the festival on time). Spent the afternoon holed up in my hotel - they let me check in when I arrived at about 11am, rather than the usual check-in time at 3pm. We honestly didn’t have it too bad in Chichibu, though there was a small landslide a hundred metres from my hotel or so. I got thoroughly soaked when I quickly popped out for lunch.

Ryusei Matsuri went on as planned, though I didn’t realise that the special festival express buses had been cancelled until I’d missed the last regular bus for three hours by mere minutes. Had to catch a taxi, which was not cheap.

Repercussions continued to pop up throughout my trip - for example, the main street in Utsunomiya had extensive evidence of flooding, and the lift at my hotel in Toda-Koen was out of order.

To briefly illustrate the general rules discussed so far:

号 can be used in non numerical senses as well. Like in the name of ships. Like, in Japanese the Titanic is officially タイタニック号.