Notice: As per conversation last week, we’re continuing to split chapters over two weeks for now.

More advanced readers planning on reading the whole chapter in one go, feel free to fill out the vocabulary sheet for the remainder of chapter 3! 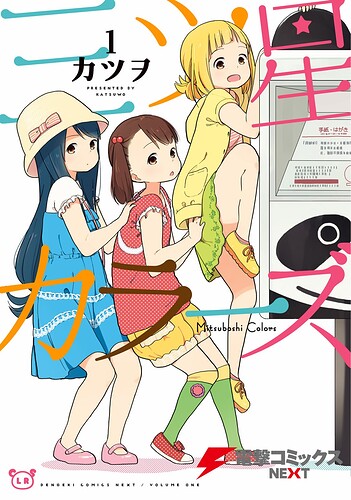 The following links will take you to previously-asked questions. Because this list is manually put together, some questions may be missing from the list.

Links will be added after there is discussion.

Context for the first page of this week’s reading: Not shown, Yui has just placed an envelope in the mailbox that looks like a panda. The first panel follows this.

No questions (for once), just really like how おやじ is kind of caring in this chapter by buying their cat a food bowl

Just changed it, thanks for the reminder

Also, side-note, but ぱんこ is listed on the vocabulary sheet as “not an actual word,” but ぱんこ is absolutely a word… Panko is pretty common, even in American/Canadian households. It’s bread crumbs, essentially… (though in this case, it’s also just a funny play on words and way for Sacchan to segue from ぱんや to うんこ) . I was just curious if there was a particular reasoning for it being listed as “not a word” before I changed it.

I was just curious if there was a particular reasoning

I had even double-checked, at that…

No worries, then! It’s just something that I have in my pantry at all times, so I didn’t even have to think about it when I saw the word.

Except from the criminal’s note, I think I understood everything more or less, even if I don’t understand how some of the constructions work structurally…

The whole joke of the week is that Sacchan is randomly confusing other words with “poop” and it culminates in her asking in the bakery whether they have any poop, right?

As for the criminal’s note:

I think I understand the second line. “What is bread that isn’t/can’t be eaten?”? Accordingly, Sacchan asks the bakery if they sell inedible bread? But I can’t really make sense of the first line, especially that に is confusing me.

On that same page, I’m also confused as to whether Saitou is trying every combination beginning from 0001 or whether he’s been trying combinations since one o’clock or something else entirely.

Here is a good place to ask those kinds of questions, if you have any more! You’ll likely get some answers and resources that will help you make sense of structures you don’t quite get.

Conjunctive のに is exactly what I was missing, thanks.

Still not sure about the structure of that sentence:

I’ll probably add more questions during the week, too tired for it now.

All I have to say is that I’m glad to see the glasses trend continue, and that on the very first panel I was briefly excited that パチパチ is one of the few onomatopoeia I’ll actually recognize… then realized they didn’t quite write it that way. Nevertheless!

You know, at first this bit of the conversation made me wonder if perhaps the multiple possible interpretations contributed to this being a riddle, but since they’re all kind of similar (perhaps with a little lateral thinking) I’m assuming this instance is more a case of Japanese just slicing a concept differently, and somehow all 思い is a unified thing I can’t fully wrap my head around after a few decades thinking about the world differently. My guess is 思い is just 思い, it just takes a lot of English words to talk around it, but my one-language-knowing brain is often not happy about it, haha.

This is probably not contributing much, and who knows if it’s even right, just a thought I had on a subject I am totally unqualified to talk about that I wanted to type through anyway.

I think you’re probably right on the money there; that to Japanese it is the same concept, and it’s just us trying to map it into English that’s causing the headache. (Which at this point is 95% of my headaches in Japanese. If I leave it in Japanese and just try to understand it for what it is and not translate, my head hurts a lot less. I just usually can’t make myself do that because I have to know the details of everything.)

What I can say is, with major spoilers for the discussion:

I checked the anime to see how it translated this. Their translation:

“I am Pan, a loaf stuffed with everyone’s love, but you can’t eat me. What am I?” 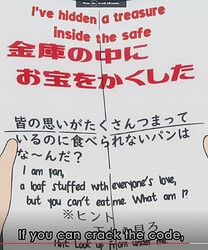 Edit: This is obviously a very loose interpretation on their part that doesn’t map perfectly to the Japanese grammar. But honestly, after having spent the better part of 2 hours trying to explain why I think the riddle says what it says, I can relate to them taking a shortcut, especially because the パン is vitally important (hence my steadfast refusal to translate it) to the riddle… But yeah. This also is a pretty strong argument in favor of, “Read the whole chapter if you can,” because part of my dancing around is trying to explain the riddle without giving away the end.