Of course, earlier chapters are still welcomed to be discussed.

Let me start with,

What is written on the road on Page 27 (first page of the chapter)? 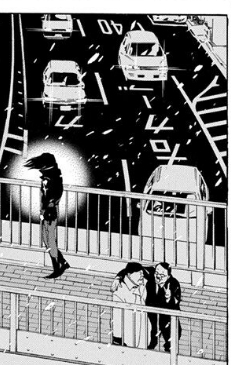 @polv we need another discussion thread for this week’s reading. ^^’ Or did you intent do keep all discussions for volume 2 in the same thread?

Everything for Vol.2 will be in here, as suggested in the Home Thread.

The tried and tested method is to have one thread per volume but weekly posts. Example

But, that suggestion is to have weekly discussion threads, not to have all discussions in the same thread. ^^;

No, the example thread really have everything in the volume in that thread.

I guess, I misunderstood since we didn’t read volume 1 like that. And I wanted to make sure that I’m not posting spoilers for others by continuing discussing this week’s chapter in the thread.

The names of these FBI agents never cease to crack me up. I know it’s to avoid using real names, but yeah Sekllet, Guntair and Zapack are all great! XD

Anyway, Light is proving to be quite a two-faced devil: he’s got no qualms lying his parents and sister, pretending to be the good son; meanwhile, he’s clearly enjoying the process of getting rid of the FBI in Japan, manipulating Raye Penbar into killing his boss and colleagues.

That final さよなら is bone chilling!

It reminds me of Japanese video games’ names.

Nonetheless, some English movies too have the same phenomenon, but for Russian names. – I can’t find examples right now, but I did see on Reddit some time ago.

this is why it felt so odd to me too.
It would have made a stronger case if they did share and she gave input, but was not officially on the case and thus survived. She would then have lost a man we would feel less icky about, having a more respectful relationship. The way that scene was written made me less empathetic about his demise, and less understanding of her pursuing it (though it makes sense enough. This scene didn’t help, it hurt it)

Since Ray asked the coworker to get the file and then send to him, do they have record of Ray asking for it second? Shouldn’t he be one of those who got it after all got it sent? If they tracked the coworker sending it to him, that would have made it more special, but it wasn’t mentioned. And it didn’t look like he asked for it himself, other than from the lower ranking agent. Not a big deal, but it just seems to me they wouldn’t that easily know when they received it, more likely they would know the order by when they asked the superior for it, on which Ray wouldn’t even be.

L forgot to question this. Though can suspect the correct person in the end.

Second-hand persons, asking for colleague’s information, aren’t necessarily ordered by the one Raye contacted with. It seems that some either refused or decided to ask too late, receiving the information that was eventually passed along first. (Only 4 of them really asked.)

I think it is is Light going on the assumption they don’t know quite how it works yet. All they know for sure is he needs to know what they look like and has something to do with names. They have no idea how he does it, so for all they know he can kill anyone he looks at. As for not quite placing the voice, he notice is it familiar, but doesn’t know Light well enough to place it under stress.

Raye thought he would only give away names only, but not the faces; forgetting that Kira could lie (e.g. only the names need to be known.)

Well, L did challenge キラ to kill him in the previous volume and when キラ couldn’t, that ‘proved’ that he needs to know the faces of those he kills, but yeah they can’t be completely certain.

I see what you did there

Since Ray asked the coworker to get the file and then send to him, do they have record of Ray asking for it second?

Yes, I was also wondering about that, but apparently they don’t have a record of it (which seems a bit strange to me).

I think the whole thing is rather far-fetched to be honest. In principle they know that キラ needs names and faces to kill his victims so then when someone asks for a file with the names and faces of all the FBI agents (without giving a clear reason even) it seems very strange to me that the FBI director would just send that file without hesitation… Or did I miss some reasoning behind that?

Unless the director isn’t as sharp as L, nor did he trust L. But yeah, he forgor

Yeah, that too! He would definitely fight against sending those files out! I also question that they didn’t “know each other”. they would have been briefed together and probably be close colleagues already

The story makes him sound so intelligent and everything well planned, but honestly, it is only cause the writer decided the outcome

Boxing or kickboxing (but still of the heavyweight variety